At the Stomp Dance--In Honor of National Poetry Month 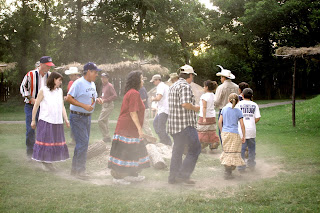 Since it's April 1st, the beginning of National Poetry Month, I thought I'd post one of my poems. This one was published in Coal City Review (2012). It's based on memories of attending stomp dances with my extended family when I was a child. I haven't had the opportunity to attend a stomp dance in recent years. Stomp dances were brought from the Southeast with the Cherokee and other tribes. They are not just great get-togethers for family and clan members. They carry strong spiritual significance, as well. So it's important that they be done in a good way.


AT THE STOMP DANCE

Cars, trucks, all day coming.
First the leaders and their helpers
set up the cook shed,
clean, rake the ball and dance grounds,
refurbish the seven brush arbors
circling the dance ground—
helpers from each clan do this.

The women bring hot and cold dishes
from home, begin to cook and cover tables
while men build the sacred fire,
centered in the dance ground’s circle
to reflect the sun.

The crowd grows.
Flirting, catcalling between young men and women
turns into challenge. Head for the ball ground,
men grabbing ballsticks, women hands free—
all the better to rest on a hip while calling a sassy retort.
Game on, men against women,
each plays by their own set of rules
to much laughter and hooting.
The sad-eyed carved fish swimming through the air
on top of the pole in the center of the ball ground
watches benevolently
while the ball whizzes past
or—success!—strikes it.

Older women and others not playing call out
encouragement and laughing insults.
So do the older men, sitting in their lawn chairs.
All the while, final preparations continue
for the main event, the dance.
Women work on old cowboy boots,
making sure their turtleshell rattles
handed down the chain of daughters,
are securely fastened to the split-open tops of the boots.
They try them on and stamp their feet hard
to check the sound of the pebbles in the rattles,
to make sure they won’t come loose. 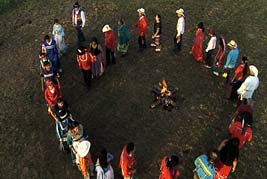 and Ani-Gatagewi (Wild Potato)—
settle into each brush arbor
as the cooks call out that the food is ready.
Clan members bring food to the elders,
join them or eat with families, friends.

Now, the food is eaten and dishes cleaned.
Now, the turtledoves are calling as they nestle in to sleep.
Now, the fireflies are taking to the air with children chasing.
Now, the sun has set and the sacred fire brings back its light.
Now, the women put on their rattle-sewn boots.
Now, the old lead singer calls out the beginning,
Now, his brothers and nephews echo their response.
Now, his sisters and nieces step into the circle beside them.
Now, the women set the rhythm with their fast turtleshelled feet.
Now, the circle spirals out from the fire.
Now, the dance can begin.

Posted by Linda Rodriguez at 5:08 PM