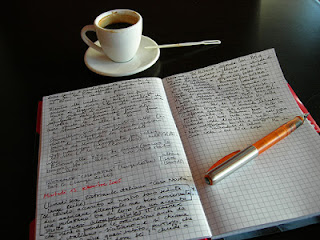 I have kept journals for many decades. Even before my creative writing professors encouraged me to keep them, I kept writer’s journals after reading that writers I respected, such as Virginia Woolf and Madeleine L’Engle, had kept writer’s journals. I have stacks and stacks of them, and periodically I wade through years of them, reading and mining for ideas and memories
.
You will notice I did not say I’ve kept diaries. A diary is an account of your day-to-day activities. A writer’s journal is the artist’s sketchbook of a writer. It holds the raw material, the thinking on paper, that goes into learning how to write better and into creating minor and major projects. 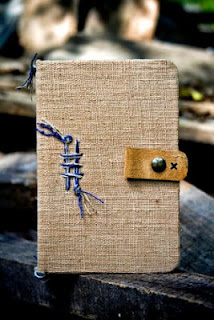 A writer’s journal may have accounts of daily activities in it, along with discussions of current events, descriptions of the striking woman seen at the coffee shop, the idea for a new novel, the first few paragraphs of a short story, lines or whole stanzas of a poem, descriptions of the sound water makes dripping from trees into a fountain at the park, pages of location or historical research, a scary near-miss turned by what-if into the germ of a story or novel, lists of words I love, scenes recaptured from my childhood or other past moments, and much, much more. Writing exercises. Lists of possible titles. The initial sketches of characters. Accounts of dreams. Rants and complaints and a good bit of whining, as well.

Now, I also keep computer journals as I write each novel. This is where I go deeper into character, work out plotting difficulties, set myself goals for the next chapter or section of the book, and keep track of things that impinge on the writing of the book. Older versions of this are what I turn to when I need to find out how long I think it will take me to complete some phase of the new book. Also, it’s where I look for encouragement when going through tough times on a book. I almost always find I’ve made it through something similar before. I keep my journals in bound books between novels and in addition to the novel journals kept on the computer.

I can’t tell you how many times I’ve found ideas or characters or settings for stories, poems, and books while going back through these journals—or found ideas that connect with other ideas I have to complete the concept for a novel or poem. Also, as I look through them, I can see on the page how my writing has improved over the years. I consider these journals necessities for my continuing growth as a writer. Just as a musician continues practicing the scales and more ambitious exercises daily, just as a painter continues sketching constantly, I keep opening my journal and writing down a description or an idea or a question I’m wrestling with or a character I’m exploring. Madeleine L’Engle called her journal work her “five-finger exercises.”

I often tell young students to keep journals, even if they don’t want to become writers. I believe it will help them navigate the fraught waters of adolescence. I know it helped me come to terms with a damaging, abusive childhood and write my way out of the anger, pain, fear, and shame it engendered in me. I’ve used journaling as an effective therapeutic technique with incarcerated youth, and I believe it’s something anyone can do to help them work their way through emotional pain and problems. 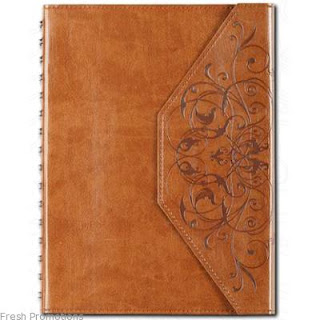 I have plain spiral notebooks, composition books, three-ring binders, and an assortment of bound books of many sizes and appearances. I have heard some people say they could never write in a really beautiful bound book because it would intimidate them, but I write even in the gorgeous handmade ones friends and family give me as luscious gifts. The act of writing is what keeps me from becoming too intimidated to write.

If you’re a writer, do you keep journals? In notebooks or on the computer or both? And if you’re not a writer, have you used a journal before to work through thorny issues?

The Importance of Saying No

I have always had a hard time saying “no.” I like people, and I always want to help good causes. This has led to years of low pay in the nonprofit sector, tons of overwork, lots of volunteer hours, and on the good side, an awful lot of great friends. It also leads periodically to a terrible feeling of overload, that point I get to when I have so many urgent or overdue or essential tasks to do that I’m paralyzed. How do you prioritize when everything needs to be done RIGHT NOW? 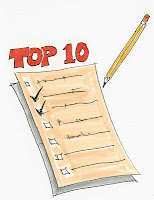 When I get to that point, I have to move into To-Do Triage. I list everything that’s demanding my attention (and get the most depressing multi-page list). Then I move down the list, asking myself, “What will happen if I don’t do this today?” If it isn’t job loss, client loss, contract violation, child endangerment, arrest, etc., it doesn’t go on the much tinier list to be dealt with right now.

I remember the first time I learned the lesson of no. I was a young, broke mother of two (still in diapers) who wanted to write. The advice manuals I read were aimed at men with wives and secretaries or women with no children or enough money to hire help with the house and the kids. Since there was three times as much month as there was money, hiring anyone or anything was out of the question—I was washing cloth diapers in the bathtub by hand and hanging on a clothesline to dry because we hadn’t enough disposable income for the laundromat.  Yet still I wound up the one in the neighborhood who canvassed with kids in stroller and arms for the March of Dimes and the American Cancer Society.

One day someone who knew how much I wanted to write gave me a little book called Wake Up and Live by Dorothea Brande, who also wrote the wonderful On Becoming A Writer. As I read it, one sentence leaped out at me: “As long as you cannot bear the notion that there is a creature under heaven who can regard you with an indifferent, an amused or hostile eye, you will probably see to it that you continue to fail with the utmost charm.”

I began carving out time and space for my writing, and to do it without shortchanging my babies, I cut out television and most of my community involvement. This lesson had to be relearned when those babies were high schoolers, my new youngest was a toddler, and I became a full-time student and a single working mother at the same time unexpectedly. It returned to be learned again when my oldest two were grown, my youngest in grade school, and I took on running a university women’s center that also served the community. Every time it had to be learned in a different way with different adjustments. Once I’d given up television, that option was no longer open to me. At one point, I switched my writing to poetry because what time I could create or steal was in such small fragments that it made novels impossible to write.

Now that I’m writing novels again and publishing them (as well as poetry and freelance work still), one of the time-eaters is the promotion work we authors must all do to win the readers we believe our books deserve. It’s not something that can be skimped on, and yet the creative work of designing and writing new novels must go forward, as well. For a while now, each request for my volunteer time and work has had to be carefully weighed, and most reluctantly rejected. At this time, my major volunteer commitment is our local chapter of Sisters in Crime, Border Crimes, of which I’m president this year. Everything else must sadly fall by the wayside—and some people are quite unhappy about that, as if they had the right to my time and skills because I’ve given them in the past. I’ve had to learn to deal with that.

What about the time book promotion takes, however? With my first novel (this was never a real issue with my poetry books and cookbook), I said “yes” to every opportunity, every event, every guest blog, every interview, every podcast, everything. And I managed to write books during that time, as well—and had the worst winter, healthwise, in many years, having worn my body down. This year I’m trying to be more strategic about the promotion opportunities I accept. I’m still saying “yes” to most of them—it’s part of my job, and I know that—but I’m examining them more closely and deciding against some that I don’t feel will be as useful for me. It’s hard, but once again I’m learning that lesson, which is apparently one of my life-lessons—“no” can be the friend of my writing and is necessary at times. 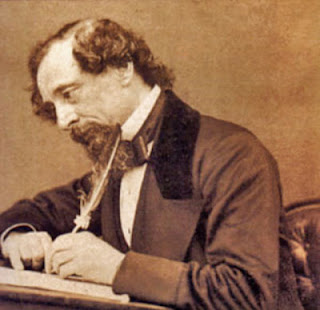 Charles Dickens, who was one of the earliest and most successful self-promoting writers, put it best for writers in any age when he said:

“‘It is only half an hour’ — ‘It is only an afternoon’ — ‘It is only an evening,’ people say to me over and over again; but they don’t know that it is impossible to command one’s self sometimes to any stipulated and set disposal of five minutes — or that the mere consciousness of an engagement will sometime worry a whole day … Whoever is devoted to an art must be content to deliver himself wholly up to it, and to find his recompense in it. I am grieved if you suspect me of not wanting to see you, but I can’t help it; I must go in my way whether or no.”

Do you find it difficult to tell others “no” when they want your time? If you’re a writer, how do you create ways to balance the promotion and the writing?