After two months of immobilization of the right arm and shoulder to try to begin the healing for my badly shattered right shoulder joint that needed but couldn't have complete surgical replacement, my right hand was not working well. I couldn't sign my name, and my signature with my left hand was totally illegible.

As I've been able to slowly begin physical therapy for the shoulder and arm, I've also been doing PT exercises for the hand, as well. Two weeks ago tonight, I gave a poetry reading at The Writers Place in Kansas City, and I was able to sign copies of my new book of poetry, Dark Sister, that folks so kindly bought. This was a big step forward for me.

I have always been a handwritten journal person. I collect beautiful notebooks and journals and fountain pens, and people give them to me as gifts. I wrote in one most days of each week. I haven't been able to since April 4th, when I fell and shattered this shoulder. But tonight I have handwritten a short paragraph in my current journal. My therapist told me to do it every day now until it hurts, along with spinning and knitting, because it will help exercise and strengthen the muscles and tendons.

Something about this whole idea reminded me of what we writers do, so here's a poem about that.

Bring your palms together in prayer
against your chest. Feel the pull

Squeeze the putty to make a fist.
Pinch it between your thumb and each finger,

one after another down the length
of the squeezed-out roll, creating a wavy snake.

Hook the tips of all four fingers, trying
to touch tips to bases, but inches of air

keep them apart. Pull those fingertips
to the center of the palm to make a fist

without the putty’s help. Stretch them
down toward the base of the hand.

Struggle to hold a pen and write a line.
Stop when the fingers tingle and go numb.

For what are we humans without the hand, clever, useful
appendage, connected so closely to our big brains,

that cuts, creases, carries, and caresses
our way through daily obstacles and opportunities.

Write another line and a second before the pain
sets in—the way every writer has to work.

The Last Beloved Woman of the Cherokee--Poem

The Cherokee, like so many Native nations, were matrilineal. The fields, homes, and children all remained with the mother and her family if the couple separated.

Women had political influence in the councils, could negotiate with other nations, and were clan leaders. When European men first encountered the Cherokee, they were appalled at the influence Cherokee women had at a time when they kept their own women as chattel. In turn, the Cherokee men were appalled that the Europeans had no women in their councils.


The highest role a Cherokee woman could achieve was "ghi gua," Beloved Woman or War Woman. Nanye-hi, the subject of this poem, had served an apprenticeship in diplomacy with her powerful uncle, Attakullakulla, so she was well-prepared for the role she held for most of her adult life. She also saved the life of a white captive and learned from her how to weave cloth on a European loom, bringing that knowledge back to her people. It was said that, upon her death, a white light left her body and entered the most sacred mound in the Mother Town, Chota, at a time when Removal (which she had fought against for so long) was almost upon the Cherokee.

Nanye-hi was the last Beloved Woman of the Cherokee until the 1980s.

Mother-clanned, the Cherokee towns,
farms, and orchards, before all were stolen
by those who forced the People on the long dread march west,
belonged to the women, as did the children.

Nanye-hi, in 1738 born
a daughter of the Wolf Clan,
married Kingfisher, bore two children.
During the Battle of Taliwa,
she took her dead husband’s place,
avenged his death, rallied warriors to victory,
became a ghi gua.

Ghi gua, or Beloved Woman,
title given by the seven clans
to women who had served the People
as warriors and mothers both.
Given a swan’s wing and special place in council,
the ghi gua even held a voting seat
on the Council of Chiefs. With their swan wings,
they had the final say
over whether the town went to war.

Today I watch women go to a war foolish as many,
often leaving babies behind.
Something’s out of synch, though.
It’s still old men, who’ve never set foot on battlefield
nor suckled a babe, making decisions of war and peace.

At the end of life, settlers forced
Nanye-hi from her home to die before the Trail of Tears.
Trying to fit the white man’s mold,
the Cherokee shed their councils.
No place for Beloved Women.
Nanye-hi Nancy Ward was the last ghi gua.

We need women with swan wings. 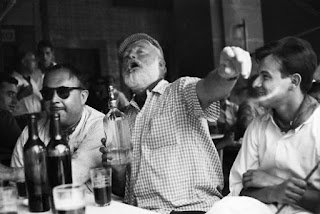 My husband is an internationally recognized scholar in his field and a research maven, so naturally he was drawn to the project of tracing my family history with a grandmother who had married and divorced thirteen times to ten different men. Most experts like a challenge, and my convoluted family history seemed a challenge he would take on and defeat easily with his ninja research skills. This weekend at lunch, he moaned to me about the latest bizarre twist he'd uncovered. “The more information I collect, the more confusing it gets, and the less I know,” he complained.

We laughed at the strange tale he's just uncovered about my great-grandparents and the way that means he once again has much more work to do and it will be more difficult. He said, “No one would believe any novel you wrote with all the unbelievable but true stories about your family. They'd say it's too contrived and incredible.”

This left me picturing a group of drunk screenwriters sitting around, desperate to pitch a story that will excite the studio execs and get funding and become a huge hit.

Amy says, “We'll begin with a guy who marries a woman while he's using an assumed name—and he doesn't tell her about it for years, but when he does, she has kids and goes on with him under his real name.”

“Yeah, I like it,” says Martin. “They're each the great love of the other's life, but they just can't seem to make it work. That's give us lots of dramatic conflict.”

“And then,” Amy continues, on a real roll now, “their oldest daughter, who's grown up with all this passionate craziness, gets married young and leaves husband and baby a year later to marry another guy, whom she leaves in less than two years with another baby, to go marry a guy with the Texas Rangers, who gets killed in a gunfight, causing her to lose another baby, and then she goes on a real tear, marrying and divorcing guys all over the place.”

Dave nods with a grin. “Loyal Dobbin. Every story needs a loyal Dobbin.”

“We've got to make it weirder,” says Amy. “More complications. Maybe the Texas Ranger isn't really dead and starts trying to find her, but she's marrying all these guys and taking their names. Oh. And she starts out as Bessie, but she decides Agnes is a name with more class—she's trying to marry her way up the social ladder, a real Becky Sharp right out of Thackeray on the American frontier.”

“Nah! Make it Indian Territory before it became Oklahoma and make her an Indian and some of these guys she marries early on Indians, too, but then she's going for richer white guys.” Dave grins again. “And of course, we've got Martin's crazy Czech hanging around, poor at first but he could be making himself richer and richer for the sake of her.”

“I like it!” Martin says. “And she also masquerades as someone named Dolly, too, when she wants to get out of a tight situation. Then, as she gets older and more settled, we've got those abandoned kids to come looking for her and make her life difficult in revenge.”

“I've got it!” shouts Dave, jumping around and half-falling over in drunken excitement. “She was the oldest of a big family and born while that father was still using a false name. Her birth name isn't even what she thinks it is. Maybe her dad was a crook or a wanted man of some kind. Maybe someone finds out and blackmails her.”

“Yes!” screams Amy. “When she's older and thinks it's all behind her, her son can come back and rape her baby sister she's always been closest to, and on her deathbed, her daughter will find her and accuse her of ruining her life and tell her she's glad she's dying.”

Martin shakes his head. “Dammit! I hate that Bette Davis is dead. Would she make a great Bessie/Agnes or what? It would be Oscars all the way. I can see it now.”

The three are now so drunk and stoned on the weed they've been smoking along the way that they just lay back in a beatific stupor, sure that they've come up with the greatest movie concept ever and their fortunes are surely made.

I am married to a man of fortitude, however, and he has only begun to fight. He's currently trying to track down the marriage certificate for that initial marriage between my great-grandparents under the false name—and who knows what new dramatic material he will uncover when he does?