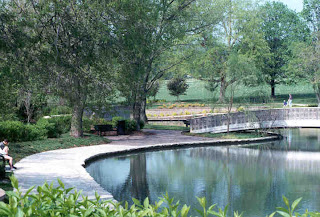 One of Kansas City's premier parks is Jacob Loose Memorial Park just south of the famous Kansas City Country Club Plaza. In this poem, it becomes a setting for an exploration of destructive passion and love late at night in the dead of winter. There are great loves that are not good loves or smart loves. Sometimes they turn deadly. Sometimes--if we're very lucky--we barely escape such loves with our skins intact, though hearts may be broken.

The man and woman in the frozen park
at midnight are crazy. See
them dance—come together,
her eyes spitting, his aware of his sin.
Watch her rigid stance
melt and his slouch turn fierce.
With choreographed impulse, her hand extends
to touch his cheek. He jerks away
in pain or something rougher.
Her shoulders sag, then square
themselves and shrug. She pivots,
ready to leave. Now he reaches out,
spins her around, draws her
close. She struggles
against his arms and chest, hands fluttering, while
he drags her off the spotlit sidewalk.
Watch her glance at the dark bushes, then
at the strange hate
in his face. See how grim
her own grows, how
she tosses her head toward the night,
as if to say, “Go ahead.
Get it over with. Rape me, kill me,
end it somehow. You can’t want that
any more than I do.”
Now his face softens.
Once more she tries to touch.
He sways away from her outstretched fingertips.

They’re crazy. Listen
to her laugh, twisting loose
and whirling away from her opponent
in the dance or war
they’ve staged here
where all breath is visible
under the streetlamps. How fast
she runs to her car and leaves.
How unprepared for this step he is.
He can’t reach out
to stop her until her car is rolling
down the drive. In the rearview mirror,
she will see his hand lift,
his mouth open, his face twist,
and she will notice
what a stranger he is, older
and fatter and sadder
than she realized.
She will stop for coffee and doughnuts
and warmth, sit coughing and shivering
alone and hate every man
who eyes her. He will clutch his chest
alone under the streetlamp,
bowing to the audience of tree and frost,
then stumble, suddenly blind,
to his car and drink
himself to bed, only to dream
of shrubs hiding blood and bruised flesh
on the frozen ground, of how
a man can come so close to killing
what he loves.

Don't forget to comment on the post before this one to be entered for a chance to win a signed ARC of my forthcoming novel, Every Broken Trust, and other books and goodies. I'll draw on Sunday and commence a new contest on Monday.
Posted by Linda Rodriguez at 12:03 PM