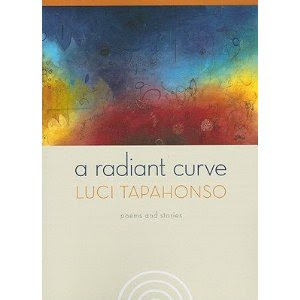 Luci Tapahonso, A Radiant Curve: Poems and Stories (University of Arizona Press) Tapahonso, Navajo, is originally from Shiprock, NM, where she grew up with Navajo as her first language. Now Professor of English at the University of Arizona in Tucson, she has published three children’s books and six books of poetry. Tapahonso initially writes in her first language, Diné, and then translates into English. Her later books are bilingual editions in Diné and English. Her work is rhythmic and sometimes mystical with a strong focus on women and family. It was with her book, Saánii Dahataal (the women are singing), that she began to win acclaim for her work. She has won many awards, including the Mountains and Plains Booksellers Award for Poetry and the Wordcraft Circle of Native American Writers, and has been featured in several PBS television documentaries. Her most recent book includes a CD with original songs and chants, as well as poetry.

Here is the link to her latest book. I encourage you to buy these books from the small and university presses that publish them. Without them, we would have few writers of color published, at all. 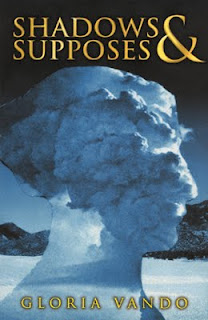 Gloria Vando Shadows & Supposes (Arte Público Press) Child of a highly accomplished artistic/political family of immigrants from Puerto Rico, Vando was born and educated in New York City. Her lushly imagistic work focuses on the isolation and alienation of the immigrant’s child, never truly at home or a real part of either homeland. She has received the Alice Fay Di Castagnola Award; the Latino Literary Hall of Fame’s Poetry Book Award; the 2009 Poetry Award from El Instituto de Puerto Rico, NY; the first Kansas Arts Commission Poetry Fellowship; two Billee Murray Denny Prizes; a River Styx International Poetry Award; and many others. Her poems have appeared in many magazines and anthologies, and on the Grammy-nominated Poetry on Record: 98 Poets Read Their Work 1888-2006. Vando has had her poems adapted for the stage and presented at Lincoln Center and Off-Broadway. She is publisher and editor of Helicon Nine Editions, for which she received the CLMP Editor’s Grant and the Governor’s Arts Award (KS). She is also a contributing editor to the North American Review. In 1992 she founded, with her husband, The Writers Place, a freestanding literary center and art gallery that is the heart of literary activity in Kansas City, MO.

Here is the link to her latest book. 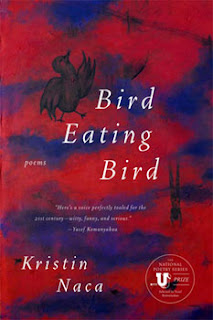 Kristin Naca Bird Eating Bird (HarperCollins) Naca is a Filipina-Puerto Rican poet. Bird Eating Bird, her first book, uses English, Spanish, and even fragments of Tagalog to explore class, gender, and race in delicate, lyrical, yet powerful poems. This book won the National Poetry Series and an Honorable Mention in Poetry from the Astraea Lesbian Writers Fund and was a finalist for the Lambda Literary Award. Naca is a professor at Macalester College where she teaches Asian and Latino literature and creative writing. She is a fresh voice with a meticulous aesthetic and immense promise.

Here’s a link to her book. Harper’s is a big NY publisher, of course, but go ahead and get it from them. They’re one of the few big guys who sponsor a first book contest.

I’ve been spending much of this dangerous heat wave in coffee shops and libraries. My old house’s a/c can't handle heat over 100 degrees. In public venues, I don’t go online because I’ve been hacked that way before. So I’ve been online less. When this heat wave goes away, I will get back to my usual schedule.

Stay cool if you’re in this deadly heat wave. If you’re not, send cool thoughts to those of us who are.

In art we try to find or make patterns in life. Sometimes, life just hands us the patterns without any disguise or dissemblance. I ran into that recently when an issue discussed in a radio interview reared up again in my real life.

To begin, here’s the link to the great interview Michael Medrano and David Campos did with me for their radio program, Pakatelas!, in Fresno, CA, on station KFCF 88.1FM. Much talk about the blog in it. Also, I’ve included below the poem about Arizona’s SB1070 that I read on the radio. (And I can't keep Blogger from double-spacing it throughout. My apologies.)

FEAR AND GUILT: AGAINST SB 1070 IN ARIZONA

When they stop the brown faces,

the Chicanos, the Indians,

when they say, “Show me your papers!”,

when only the white people walk free

without fear of being accosted

I want to tell them

their real fear comes from guilt.

Their ancestors killed the People,

the ones who were originally here.

They stole a continent.

Now they are afraid

that what goes around comes around.

It’s the Indigenous in the mestizos coming here

that they fear, can’t stand.

I am trying to swallow rage.

I am trying to remember

that my purpose is to heal

what has so long been broken.

I am trying to remember

that I know so many white people

who are outraged by this law, as well.

I am trying not to remember

the way they drove my ancestors

leaving a trail of the very young, the very old,

the too-weak-to-make-it behind in graves

scratched by hand from the frozen dirt.

And now they want us to show them proof

that we belong to the land they stole.

Does understanding the language of the heron

Does listening to the wind?

Respecting the sacredness of corn?

Caring for the land?

Do they forget that the state they live in

was taken by force of arms,

that they once signed a treaty

to those who lived there,

that many of those brown faces in Arizona

have been there generations

longer than the earliest white faces?

It is more than I can handle, this hot anger,

this break in harmony with the world.

I must turn to the ancestors,

to the spirit world.

Give me strength and sense

to deal with this outrage.

Grant me to hi dv, the peace that starts within.

Help all of us draw together

to a s qua dv, triumph over oppressing powers.

You who were responsible for the survival

of following generations, even under conditions

that seemed to dictate that the People must die,

lend us your courage and your wisdom

as we fight against this unfair and callous law.

We will be shrewd and clever as you were.

We will not allow them to win.

As many of you probably know, several states have followed Arizona’s example and enacted similar (or even more severe) laws. Both of the states I deal with in my daily life, Missouri and Kansas, have wanted to pass similar laws, but haven’t been able to do it yet. In fact, Kris Kobach, who wrote this law for Arizona, is now Secretary of State in Kansas.

Ben and I drove down to Topeka, KS, for the Fourth of July to celebrate with my sister and her son and one of my brothers. On the drive back to Kansas City that evening, we were pulled over for routine traffic stop in Lawrence, KS. At that time, we discovered that Ben’s license had expired a few days before, and he had not realized it. So the police officer took his license back to her police car to run it for other offenses (none, of course) and to write up a ticket. This took quite a while—about 15-20 minutes. She came back with the ticket and asked if I had a valid license so I could drive the rest of the way home. I nodded and pulled it out so she could see. I saw her eyes widen as she saw my name, and suddenly she had to take my license also to run it. At the same time, she called another cop who had been at the other end of the block to come and stand guard by the passenger door of the car where I sat. I assume this was to guarantee that I did not bolt for freedom. (Both times she had come up to the car, she had approached the driver’s door.) This officer started asking me where I was from, what I was doing, where I was born, where I was going and why.

We sat for another 15-20 minutes while the first officer, I believe, tried to find a way to arrest me for being an illegal alien and my white husband of an English last name for transporting me (illegal in KS) while her colleague stood at my window keeping me from escaping. Fortunately, Kansas has not yet passed its Arizona-clone law. In the end, they had to let us go.

I do not carry my passport or my birth certificate on me routinely, nor should I have to. No one in this country should have to carry proof that they were born here and are citizens. “Show your papers” used to be the cry of the totalitarian states. I hate to see it become the de facto law of the land here. If an Arizona-like law were on the books in Kansas, Ben and I would have not been able to keep ourselves out of jail. They don’t accept just drivers licenses there, saying they can be too easily forged, the same thing they say about birth certificates and passports.

I am afraid of what is happening to my country.

Posted by Linda Rodriguez at 10:57 AM No comments: