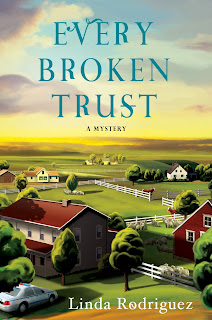 My second Skeet Bannion novel, Every Broken Trust, will be published in less than a month on May 7. To celebrate that, for the next month, I’ll be giving away ARCs of Every Broken Trust and other goodies, including small pieces of original art, to people who comment on my blog and are selected at random. Starting today.  I’ll send an ARC to someone who comments this week on the blog and leaves an email. I’ll also be giving away other goodies to commenters this week, so be sure to check back.

In Every Broken Trust, life has settled into routine for half-Cherokee Marquitta “Skeet” Bannion now that she’s gained custody of fifteen-year-old Brian Jameson and shares care for her stroke-impaired father with her ex-husband—until the past reaches out to destroy everything she holds dear. A party to celebrate the arrival in Brewster, Missouri, of George Melvin, a Kansas City politician accompanied by his troubled teenage daughter, wealthy wife, even wealthier backer, and mysterious employee, rapidly turns into disaster when Skeet’s best friend, Karen Wise, stumbles on a body in Chouteau University’s storage caves and is attacked herself. Skeet works to keep Karen safe, even as Karen becomes obsessed with the dead man’s drunken claim that her husband’s accidental death years earlier was murder.

Brian’s emotional entanglement with the rebellious daughter and Karen’s fixation on the politician as her husband’s murderer frustrate Skeet’s efforts to keep them both safe and out of trouble while she tracks down the killer, who’s targeting Karen to remove a potential witness. Even Skeet’s friends and neighbors in Brewster keep secrets from her, and Skeet wonders if any of them are what they seem. Not knowing who she can trust any longer, Skeet struggles against the clock to solve a series of linked murders stretching into the past before she loses Brian forever and her best friend winds up in jail—or dead.

And here’s a sample of the book. If you want a chance to win an advance reading copy and other swag, leave a comment below with your email.

Posted by Linda Rodriguez at 7:46 AM

Email ThisBlogThis!Share to TwitterShare to FacebookShare to Pinterest
Labels: Every Broken Trust, giveaways