Coming Up on the Holidays 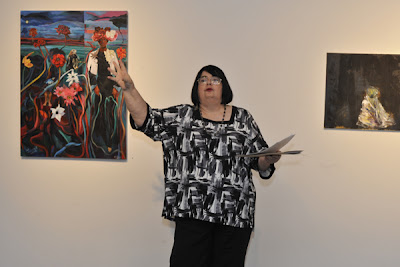 This was taken at my reading at the Alliance of American Artists national conference in Chicago at the end of October. I can't imagine for which of the three poems I read I would make this kind of gesture, but I am nonetheless. Ben calls this "Let My People Go!" I may need some of that energy now.


It's the beginning of December as I write. I have no Solstice, Christmas or Chanukah shopping/baking/decorating done (and we're a family that celebrates all three holidays--and expects handknitted or handsewn presents from me). I have page proofs of Every Last Secret to go through with a fine-toothed comb, looking for typos and other errors. I have three reviews, two essays, and two guest blogs to write (speaking of which, I was guestblogger on Jungle Red Writers yesterday--check it out), plus five short chapters left to write on Every Broken Trust. After a lot of traveling to sing for my supper, my house is a disaster area, and I'm expecting guests for the holidays, including one from Germany. My 19th wedding anniversary is coming up two days after Christmas, and I haven't even a thought of what to do for it or what to give my sweet husband.

My first impulse is to go back to bed and pull the covers over my head, but I don't think that would work for an entire month. So it's time to roll up my sleeves. To facilitate my futile efforts to get all this done in time, I intend this month to post some of the earlier posts in the Writers of Color series and in the Literary Mystery Novelists series, interspersed with occasional online bursts of current panic. This will give new followers and readers a chance to see these posts and learn about these writers, and it will give me a chance to get through the month without committing hara-kiri. 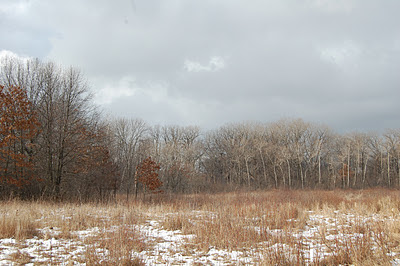 To remind myself to calm down and that I can get a lot of work done when I am in a good, healthy state of mind I will return to this photo. This was the view out my studio window when sitting at my desk while I was at Ragdale on a terrifically creative and productive residency. The last patch of virgin prairie east of the Mississippi.

And here's a poem I wrote while at Ragdale about something that happened while I was there.

HORNED GOD
Walking the narrow path
through mounds of snow,
cold air stinging my nostrils,
waking up my lungs,
walking with the contentment
of a good day’s work swallowed whole,
heading in the dark frosty air
toward a bright-lighted room
with warm supper and companions,
movement on the periphery of vision
startles, something large.
I stop, turn slightly to my right,
eye to eye with a three-point stag.
One long, long half-second’s stare,
then strong legs gathering and leaping,
bounding four feet each time,
five amazing leaps across my path
vanishing behind a large tree, supporting shrubs,
probably running straight out now
back to his home on the prairie.
I stand, paralyzed, mute,
breathless laugh, wide smile,
breathing deep of the wild night.
That's the frame of mind I want to get into. What are you doing to be less frantic for the holidays? How will you keep your sanity during these busy times?
Posted by Linda Rodriguez at 11:03 PM