Now that I have a new laptop again and have transferred most backed-up files and reinstalled most of the programs and drivers I need, I can post my report on AWP 2013, the national conference of the Association of Writers and Writing Programs, which took place in Boston earlier this month. Over 12,000 writers, teachers of writing, editors and publishers crammed into Boston’s Hynes Convention Center for the biggest AWP yet.

Saturday morning, I was on “Women and Crime Fiction,” a panel proposed and moderated by Toni Margarita Plummer and comprised of Sophie Littlefield, Nicole Peeler, and me. We had a standing-room-only crowd, and a number of the audience members came up afterward to say it had been the best panel they attended all conference. One even said, “This has been the only panel that didn’t make me feel marginalized.” It was, of course, one of only two genre-fiction panels at the conference, I believe. (The program is so massive that I could have missed another one, but AWP usually focuses only on literary fiction, nonfiction, and poetry, so probably not.)

One of the things I think the audience really appreciated was that, although we discussed some very serious topics—women and violence, a gendered history of crime fiction, age and women in American society, women and sexuality, among others—we used a lot of humor and snark in our presentations. I usually do to try to entertain as well as inform, but with Sophie and Nicole, we had the audience rocking with laughter. Quite an appropriate way to take a look at some of those topics, I believe. Toni, who is Sophie’s editor and mine, kept us on time and on target, however, and the audience was not only receptive but full of thoughtful, provocative questions and comments.

For the rest of the conference I was in the bookfair, either at the Tia Chucha Press/Scapegoat Press table with Deborah Miranda and Luis J. Rodriguez or at the BkMk Press/New Letters tables helping or spelling Ben.  I had much more help than expected with the Tia Chucha/Scapegoat table, and Ben had much less help than expected with the two BkMk/New Letters tables, so I was glad to give him a hand when I could. I loved meeting the G.S. Scharat Chandra Fiction Book Prize winner, Valerie Fioravanti, whose book of short stories, Garbage Night at the Opera, so pleased me when it came out.

Deborah Miranda launched her new book, Bad Indians, nationally at AWP and spent most of her time at the conference at the booktable. (My review of this truly important book will appear here this weekend.) It was one of the delights of the conference to be able to spend much time with her since she is one of my favorite people in the world. And because Deborah was there, so was her bright and funny partner, Margo Solod, allowing me to meet her in person for the first—and I hope not the last—time.

This year, Luis J. Rodriguez, publisher of Tia Chucha Press, my friend and publisher, and our partner in the bookfair for two good years now, had promised to be more available at the booktable. He had tried to be last year, but was constantly in demand at the conference and wasn’t able to be in the bookfair as much as he had hoped. This year, he kept his promise and was around to help staff the table much more, and the chance to spend time with him was also a real blessing. Luis is one of those unassuming remarkable geniuses out there in Latino literary land, a real community builder and someone who is making a definite difference in the world with his work and his generosity.

We kicked off a special fundraising effort by Letras Latinas, that great organization that supports Latino arts and letters and especially poetry. Letras Latinas has been given a grant that will be matched with another grant if they can raise the amount of the initial grant from other sources. So Francisco Aragón, one of Scapegoat’s authors and director of Letras Latinas, had arranged with Ben to offer a limited number of his books with a letterpress broadside of Eduardo Corral’s poem, “Pears,” with the entire purchase price to go to Letras Latinas programs. (I believe there are still a few of these left, and it’s a great cause, so if you have a chance to see Francisco, pick one up.) Francisco is another old, valued friend, so I truly enjoyed spending time with him at the table, as well. 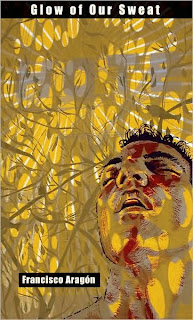 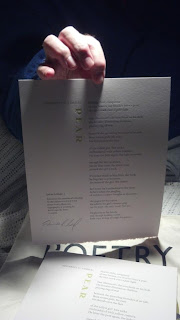 The climax of the whole conference was at the very end when my dear friend, writer and activist Marjorie Agosín, and her wonderful husband, John, came into the city while recovering from pneumonia to sit and visit with Ben and me. We hadn’t seen each other in two years, but Marjorie is one of those friends that you just fall back into conversation with as if one of you had just walked back into the room after being gone for a few minutes. She is one of the most spiritually evolved people I know and at the same time absolutely the most fun. We had margaritas and appetizers and much deep laughter. I was pretty much a physical wreck by the time I walked into the place where we were meeting, midway between the convention center and our hotel, but at the end of our time together, I was feeling no pain until later that evening when it all came back on me heavy-duty. (All right. The huge margarita might have had a little to do with that, but I think it was mostly because of being with someone so wonderful.)

And that’s why I keep going to AWP, even though it gets huger and more difficult for me physically each year. It’s the place to see and spend time with people I dearly love and don’t get to see nearly often enough.

Next up, I'll review Deborah Miranda's Bad Indians: A Tribal Memoir, which is, I think, one of the important books to come out this year. This weekend for that. Next week, another Books of Interest by Writers of Color post and who knows what else. Tsa-da-sa-s-de-s-di! Take care!

Posted by Linda Rodriguez at 6:21 PM