A Literary Festival in Iowa City and Two Poems 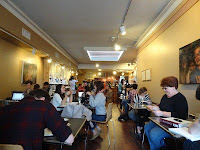 Last weekend, Ben and I drove up to Iowa City to set up a table at the book fair of a big music and literary festival they were having, Mission Creek Festival. The photo at left is of the coffee shop that shares space with the great independent bookstore, Prairie Lights. One of the things I love about Iowa City, home of the University of Iowa and the Iowa Writers Workshop, is that it's one of the most bookish towns you'll ever visit. Renowned poets and writers have their names engraved in the sidewalks downtown. You find people reading books in public everywhere you go.

We stopped at youngest son Joseph's apartment to spend the night, only to find he'd turned in his dissertation that afternoon. This called for celebration. Joseph's been battling the diss for a year and a half. His normally huge smile is back, and it's obvious a weight has been removed from his shoulders.

Next morning, we headed out to the book fair, and as soon as we had unloaded the boxes of books, catalogs, and subscription cards for New Letters and BkMk Press, Ben headed to Cedar Rapids to catch a plane for Boston. One of the books he'd published, We Are Taking Only What We Need (BkMk Press, 2011) by Stephanie Powell Watts, had been named a finalist for the Hemingway Foundation PEN Award, and the award ceremony would take place the next day. 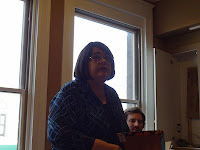 Fortunately for me, almost-Dr. Joseph helped me at the book fair all day. That evening, I was scheduled to read at an event at Prairie Lights, and we scrambled to make it there in time. This was a reading in honor of New Letters, the award-winning literary magazine.


We had a large crowd show up for the reading with a number of people having to stand throughout. They were a wonderful, receptive audience, also. That's another of the things I like about Iowa City!

In honor of National Poetry Month, I thought I'd post two of the poems I read last weekend.

In his first words, I can hear Oklahoma,
the hill country way back behind his talk
about teaching French literature in translation,
as if I have gone home, drifted back
through all the years to that childhood place I fled.

I have described it to others
as the armpit of the nation,
when I was young and not long free
of its windy roads and redbud trees and overgrown
hills, still hurt and bitter
about things Oklahoma had little to do with,
beyond being the last place to stand
for a people and the place where one of them
was born and the place where he left
his wife and kids. The last two events were
what ate at me, and they could have
happened anywhere.

Only the first was unique
to Oklahoma, the old Indian territory
where my ancestors limped off the Trail of Tears
to join other tribes forced from their homes
by other ancestors of mine,
founded the Cherokee Female Seminary
at Tahlequah and a newspaper
all over again,
were finally forced to give up their lands
so rich ranchers could take the best parts
of the reservation and leave the hilly, scrub lands
to my great-grandparents, great-aunts, grand-uncles,
and Grandma.

What does any of this have to do with me now
all these years and miles away?
Me, with the broad squaw face,
as my father, from whom it came, called it?
When I hear Jim say about Oklahoma
(as one refugee to another), “We both got out,
but it’s still inside—it settles in you,”
I know he’s right, Oklahoma in more than his voice,
in the way he makes light of misfortune,
in his penchant for poking fun
at pretensions, his own and others’.
Oklahoma’s settled in us both.
And through the echoes in his voice of its turtledoves
and winds and sky that could pull you off your feet
into infinity if you didn’t have troubles to weigh you down
to the earth, I make my peace with it
and come home.

How I fear the witch in me,
the one in touch
with power, the one who knows
without knowing
how, the secret
priestess, spirit-bearer, the ugly side
of woman, the crone—
and I remember the Cherokee
legend of Stoneskin, superhuman
cannibal, devouring whole
villages, how the People
set up a fortress of women
menstruating, how the sight
of each weakened Stoneskin
until he died and, dying, told them
all the secrets, ways
of power, conjure spells, ways
to do things. The Cherokee live
off the wisdom
of a dying monster and the power
of bleeding women, and they remember
this. There is a witch somewhere
in every woman.

Posted by Linda Rodriguez at 12:34 PM