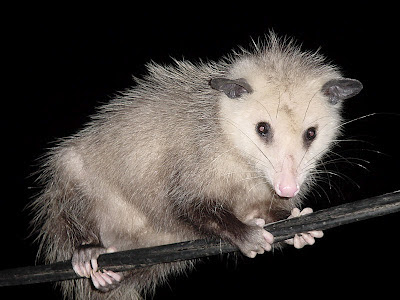 My final poem for National Poetry Month with a photo of the animal at the crux of the poem.

A mother possum crawled down the chimney
the spring Donny came to us
because both sets of his parents had kicked him out,
the same April after your dad and I divorced
when you kicked a hole in the dining room wall.
The possum was swollen with young
she would later carry, half-grown, on her back
or hanging from her thick, hairless tail.
“An oversized rat with maternal instincts,”
your dad once said.

Instead of one angry son, I now had two—
fifteen and seventeen—
two forged signatures on absence excuses,
two discipline committee meetings,
two conferences with the principal.
While I worked,
you shared contraband beer,
as well as the basement apartment
with its fieldstone fireplace
in which you found the possum one cool evening.

Laughing and cheering, you teamed up
to cage her with a trash can,
carry her to the alley out back and dump her.
The possum squeezed back
down the chimney twice more. The third time
you threw her out on Troost, screaming
for a car to smash her beneath its tires.
She must have been near her time,
desperate for a nest,
to crawl back down after that.

The noise woke me after midnight.
Donny had clubbed her with his nunchuks.
You both kicked and stomped
her head as she lurched, stumbled
between your feet.
Halfway down
the basement steps I stopped,
seeing your faces. The possum fell
limp. I backed slowly up the stairs.
In the morning, you couldn’t meet my eyes.
I just made you clean up the mess.

Tomorrow is the launch for Every Last Secret!! It's already shown up in some bookstores. I can't wait for my new baby to see the light of day. A huge thank-you to everyone who has helped, encouraged, and supported me during this process!
Posted by Linda Rodriguez at 11:50 AM