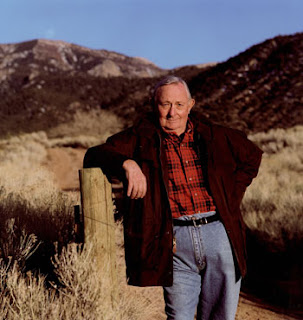 Tony Hillerman (1925–2008), an Albuquerque, New Mexico, resident since 1963, was the author of 29 books, including the popular 17-mystery series featuring Navajo police officers Jim Chee and Joe Leaphorn, two non-series novels, two children’s books, and nonfiction works. Hillerman was born in 1925, in Sacred Heart, Oklahoma. Although he was raised among the Pottawatomie and Seminole Indians and studied at an Indian boarding school, Tony Hillerman was not Native American. He attended Oklahoma State University (1943), the University of Oklahoma (B.A. 1946), and the University of New Mexico (M.A. 1966). He worked as a journalist in Texas, Oklahoma, and New Mexico (1948-63), lived in Albuquerque, and taught journalism at the University of New Mexico (1976-85).

Hillerman was a president of the Mystery Writers of America and received their Edgar and Grand Master awards. In fact, he had received every major honor for mystery fiction, including being named one of mystery fiction’s Grand Masters. His other honors include the Center for the American Indian's Ambassador Award, the Silver Spur Award for best novel set in the West, the Navajo Tribe's Special Friend Award, and France 's esteemed Grand prix de litterature policiere.

This is going to be a more personal post than my posts in the Literary Mystery Novelists or Writers of Color series usually are.
It can actually be filed in either of those series because of the issues I want to address. Tony Hillerman was not only one of my favorite mystery novelists and a gifted writer, but he opened the door among major trade publishers for novels that dealt with Indigenous, Latino, and many other cultures. So having begun this post with a brief recap of his illustrious career and a link to buy his books, I’d like to tackle the issue of this Anglo writing about the Diné (the Navajo people) in particular and other Southwestern tribes in general.

This is a controversial issue. Many people, some of them my good friends, believe that no one outside a culture has any right to invent a story about that culture—and certainly never from the viewpoint of a member of that culture. They believe this constitutes appropriation of their culture. I can appreciate their viewpoint and affirm their right to this belief.

They have good reason to believe this. Our cultures have been misrepresented by Anglo anthropologists and folklore collectors for centuries. An awful lot of books, especially novels, written by outsiders to a culture end up written from the viewpoint of caricatures rather than real people, and the culture is presented as a collection of stereotypes of that culture (often derived from those misrepresenting researchers). These books almost always, in one way or another, diminish or denigrate those cultures. Consider the uproar within the African American community over The Help. This is appropriation—and the wrong way to write about a culture outside of one’s own.

Hillerman writes his novels the way a writer should write about another culture—with respect, extensive research, and the input of members of that culture. In fact, the Diné have officially declared Hillerman a Special Friend of the Navajo Nation for his knowledgeable and sympathetic presentation of their culture and people in his books. When the question of writing about a culture outside one’s own comes up from writing students, I always direct them to Hillerman’s books and other writings as an example of the right way to handle this issue. He spent years studying the Diné because he admired their worldview and way of life and had friends among them. He didn’t just decide to write about them because he’d read a book or seen a movie and found them exotic. He knew the Diné and had friends among them long before he decided to write about them—and then he learned more.

Some people are still unhappy about outsider writers portraying their cultures, even if these writers write with respect, extensive research, and the input of members of the culture. This is because they see such a writer getting published while writers who are actually from that culture cannot. This is also a valid concern.

Writers from cultures other than the mainstream Anglo-European culture of the United States are represented in publishing, as in so many areas, in numbers much smaller than their proportion of the population. This is a complex issue, having to do with disparate access to education and other opportunities that foster success at writing, as well as the ingrained habits of publishers to go with what is familiar. When Hillerman tried to publish his first Joe Leaphorn novel, he was initially told to take out all “that Indian stuff” if he wanted to get published.

Under such circumstances, it can be hard to see a Tony Hillerman become a bestseller while talented Indigenous writers find it difficult to publish, at all. On the other hand, however, the success of Hillerman has opened the eyes of publishers to the reading public’s interest in novels with Indigenous themes. I believe that writers who write with the same kind of ethical care and respect (though I do know they are in the minority) can do the same for whatever culture they depict.

Am I right? Are my friends who believe differently wrong? I don’t see either being the case. Many writers today who write about other cultures in their novels are appropriating those cultures and propagating stereotypes. And many of them are published instead of a writer of that culture. My friends are right, and it is imperative for all of us to fight against these situations.

When it comes to writers who genuinely make the considerable effort to do it right the way Hillerman did, I will continue to vary from my friends’ conclusions without considering theirs necessarily wrong. Hillerman remains one of my favorite writers, along with Luci Tapahonso, Sherwin Bitsui, Linda Hogan, Louise Erdrich, Leslie Marmon Silko, and many others. What do you think about this issue?

Posted by Linda Rodriguez at 9:41 PM