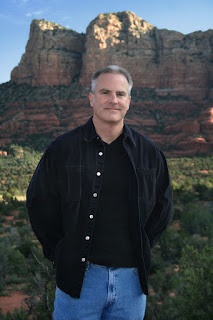 This is my final post counting down to Malice Domestic 2012 in Bethesda, MD, April 27-29, and Greg Lilly is the last of my panelists for Have Gun Will Travel: Mysteries Set Out West. This panel will take place at 10:40 am in the Diplomat/Ambassador room of the Hyatt Bethesda, and as you've seen in the posts of the last several weeks, it features a set of remarkable panelists--led by me as moderator. So it should be lots of fun!


Greg Lilly is the author of four mystery novels. Scalping the Red Rocks, his most recent, is a fascinating novel about urban growth and runaway development full of colorful characters, but the locale of Sedona, AZ, is practically another character in the book and absolutely integral to the story. Lilly has a deft comic touch, at the same time offering plenty of drama and complex plotting.


Here is the link for Scalping the Red Rocks.

Growing up in Bristol, Virginia and then living in Charlotte, North Carolina, the rich storytelling tradition of the South pulled Greg Lilly into writing.

He first turned to writing short stories after plot lines and characters emerged from the technical manuals he wrote for a large family-owned corporation. 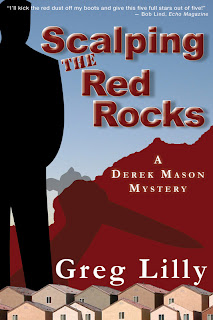 Derek Mason is the gay outcast son of the powerful and conservative Harris family of North Carolina.  He rebels against the seemingly straight-laced family while his digging into the family history unravels hidden secrets and lies.

For 18 years, I worked for a large family business. The legends and tales about the real life family inspired me to create a fictional one and add an outsider to the mix who felt he was ostracized – but not for the reason he thought.

Derek is brash, funny, smart, and a bit of a southern bad boy. He usually speaks before his mind has had time to edit his thoughts.

I start with the characters. I know is odd for a plot-based genre like mystery. Once I know the characters, which is nice to have the sleuth established now, I put Derek in a setting and a situation.  I know where the story starts and where I want it to end, and then I let Derek and the characters fill in the middle.

I write for a living – the “paid-for” work is writing and editing for monthly magazines, so I have deadlines throughout the month. I try to set aside an hour mid-day to work on my fiction.  This started when I worked for that family-owned business in their Information Technology division. I spent my lunch hour each day working on my first novels.

Writer’s block – I don’t believe in it.  I don’t really have time because I have to produce for the magazines.  The books of Natalie Goldberg, Anne Lamott, and Julia Cameron taught me early on that the mantra was “Just Write.” Good or bad, I get something on the computer screen. I can edit later – and I do, a lot.

The monthly magazines keep me busy. On the fiction side, I’m working on a stand-alone novel that intertwines a storyline from the early 1700s with contemporary plots: an ancestor’s story that parallels the storylines of her descendents.

At a young age, I loved "The Three Investigators" series by Robert Arthur (and others). I read all the ones our elementary school library had. Then I started reading the Newbery winners like My Side of the Mountain by Jean Craighead George. I wanted a llama.

Actually, in school, I didn't like to write because we had to. Also, the teachers told us what to write. Not until college did I start to write for fun.

In my first job, I wrote technical manuals and guides. Characters and plots started showing up, so I found a fiction writers group and joined.

After college, my first job was with that large family-owned company.  I turned to writing short stories after plot lines and characters emerged from the technical manuals I wrote for computer systems.

I don’t think of myself as a writer, but really more of a story teller.  I remember making up stories and dialogues for robins and crows hopping around the backyard before I ever learned to write.

Currently, I am not part of a critique group. I would love to find one that fits. That’s difficult to do.  While living in Charlotte, North Carolina, I was part of a critique group that met every two weeks for years.  A few of the original five members held a 20th anniversary reunion a couple of years ago, and it felt like we had never been away from each other.

The support and the honest critiques are what helped me the most. Those two-week intervals and meeting deadlines were key to getting me to finish my first novels.  If I didn’t bring in a chapter after a few meetings, I was asked: What’s happening? Why aren’t you working on the novel?

We were all around the same experience level, all learning together and sharing ideas.  There was mutual respect for each person’s work. That is how a successful group stays together.

Writers need to write.  Learn the craft of writing.  The art of storytelling comes later.  Read books on plot, character, pacing, style, editing.  Deconstruct favorite novels to see how the story was plotted, how the characters changed, what their arc was from beginning to end.

Some of my favorite writing and creativity books include: The Artist’s Way by Julia Cameron; Writing Down the Bones by Natalie Goldberg; Bird by Bird by Anne Lamott; The Writer’s Journey by Christopher Vogel; Self-Editing for Fiction Writers by Renni Browne & Dave King; Eats, Shoots & Leaves by Lynne Truss; Woe is I by Patricia O’Connor.

Read good novels, not necessarily popular ones.  Find books where the story sticks with you long after you have moved on to other books – analyze those.  Read what you want to write.

I thought I wanted to be a “gay writer,” but the genre really didn’t interest me – stereotypical plots and one-dimensional characters – at least of the ones I read.  I decided that I was more than that and my characters had more to offer than that.  Don’t be afraid to change direction, to broaden your definition of yourself.

The hardest: The process of marketing and selling books.  That is a completely different set of skills from writing a book. The days of handing a book to a publisher and starting the next one are long gone.  Each of us needs to be a businessperson – producing and selling stories.

Most surprising: Writers are helpful and supportive to each other.  They may not have the time to read and recommend revisions to new writers’ work, but that’s because they have their own deadlines to meet. I think most writers would love to be in a community to discuss writing and offer encouragement to each other if the financial obligations of making a living didn’t get in the way.

For people who love to tell stories, to record them (on paper or electronically) so they can be shared with others, being a writer is the best occupation – paid or not.  Published or aspiring author, we are all writers who write because we love it.

And next Tuesday, April 24, my novel, Every Last Secret, launches at the Central Library, 14 W. 10th Street, Kansas City, MO, at 6:30 pm (reception at 6:00 pm). Very, very exciting! Right after this launch, I'll be heading out  to Malice Domestic. Hope I'll see you at one or the other of these two events!
Posted by Linda Rodriguez at 11:06 PM