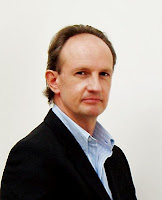 Richard Godwin is a British poet, fiction writer, and playwright.  His dark crime short stories and poetry have appeared in many magazines, such as A Twist of Noir, Crime Factory, and Needle Magazine of Noir, and anthologies, such as Back in 5 Minutes and Lyrotica. His play The Cure-All has been produced on the London stage. His first crime novel, Apostle Rising, was published in 2011, and this extremely dark psychological thriller has been lauded for its tight, complex plot, vivid characterization, and disturbing yet lyrical prose. A compelling police procedural and psychological thriller about a psychopathic serial killer who crucifies politicians and prostitutes, Apostle Rising pits police detectives Frank Castle and Jacki Stone against this evil while their own lives unravel around them—and in Castle’s case, his sanity perhaps.

Godwin is a writer with great promise, and readers of his first novel will eagerly await his second, Mr. Glamour, due out from Black Jackal Books in April. Here are links to purchase his book.

Richard Godwin is the author of crime novel Apostle Rising, in which a serial killer is crucifying politicians and recreating the murder scenes of an original case. The novel has received great reviews http://www.richardgodwin.net/media It has just sold foreign rights to the largest publisher in Hungary. He is widely published in many magazines and anthologies and also writes horror and Bizarro as well as literary fiction and poetry. You can find out more about him here http://richardgodwin.net. His Chin Wags At The Slaughterhouse are popular and penetrating interviews he conducts with other authors at his Blog http://www.richardgodwin.net/blog. His second crime novel Mr. Glamour will be published in April of 2012 by Black Jackal Books as a paperback. It can be pre ordered from Black Jackal Books and Amazon in March.

What was your inspiration for Apostle Rising? Had you always wanted to be a writer?

Apostle Rising was born out of my interest with the intersection between crime and horror. I believe that real horror exists in the things humans do to one another. I was also interested in identity and what that means. I wrote it in a style that alternates between what has been called my dark poetry and crime, which reviewers quickly said was unusual and effective. It received excellent reviews. It is also about the corrosive effect of evil on those who come into contact with it. It has just sold foreign rights to one of the largest publishers in Europe.

I wanted to be a writer since I was a teenager.

How would you describe Apostle Rising to someone who has not read it?

A beautifully written, layered novel about why humans do the things they do. It has the biggest surprise in it; no one guessed the ending.

I write every day. I see it like practicing my tennis serve.

My second novel, Mr. Glamour, is being published by Black Jackal Books as a paperback this April. It is a mystery novel about a dark intruder in a Glamorous world. I also have many stories going into anthologies, among them “Tales of the Mustard Man” with Pulp Metal Magazine as an E Book. The Mustard Man is a character with a series of stores based on him. There are some new ones in this, and it will be out in the next few weeks.

The main two would be Dostoyevsky and Dickens. There are many others, too many to mention.

Write every day and read. When you are reading, try to see how writers achieve their effects.

I am rarely surprised. I love writing, so it is not hard. It is a process, and the beautiful thing about it is you keep learning—there is no ceiling.

Posted by Linda Rodriguez at 2:57 PM