Books of Interest by Writers of Color—Tony Diaz and Librotraficantes

Tucson School District, predominantly Mexican American, has been forced by conservative politicians to get rid of its highly successful and lauded Mexican American studies program—and the books used in it. After a long list of books banned by the school district was released, district employees boxed them up and carted them out of the classroom mid-lesson while teachers were teaching from them and students were reading them and doing projects using them. And teachers have been told they face termination if they’re caught using these books or teaching anything else about “race, ethnicity or oppression.”

The books banned to high school students in Tucson read like an honor roll of the books by writers of color I’ve talked about in this series—or have on my list to cover in the future. American Book Award-winners, PEN/Faulkner-award winners, Pulitzer Prize finalists, and many other award-winning and classic books fill this list.

Out of Houston has come the answer to this blatant censorship, guided by novelist, editor, radio host, and activist Tony Diaz—Librotraficantes. A caravan will take banned books and authors from Houston to Tucson, stopping to give readings and pick up new authors and volunteers along the way. Learn more about Librotraficantes, watch a fun video about the project, and donate or volunteer at this website. http://www.librotraficante.com/

Today, on Books of Interest by Writers of Color, we’re talking to Tony Diaz about this terrible situation and about Librotraficantes. 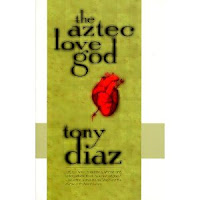 Originally from Chicago, novelist Tony Diaz is the author of novel THE AZTEC LOVE GOD, which Ishmael Reed selected as the 1998 Nilon Award for Excellence in Minority Fiction. Reed called Diaz “Relentlessly brilliant.” Diaz is also included in major anthologies such as HECHO EN TEJAS: An Anthology of Texas Mexican Writers edited by Dagoberto Gilb, and LITERARY HOUSTON edited by David Theis. His essays has also appeared in the Los Angeles Times and Houston Chronicle. He has just completed his second novel CHILDREN OF THE LOCUST TREE which is in the hands of his agent.

Diaz moved to Houston to pursue a Master of Fine Arts degree in Creative Writing from the University of Houston's Creative Writing Program. He became only the 3rd Latino to complete an MFA from that program. While in graduate school, he began conducting workshops and seminars for different community organizations such as the then-Chicano Family Center and Talento Bilingue de Houston. That work inspired him to remain in Houston after completing his studies. He went on to create Nuestra Palabra: Latino Writers Having Their Say, which just celebrated its 13th Anniversary. Nuestra Palabra promotes Latino literature and literacy. This consists of workshops, readings, and book fairs. He is also the host of the Nuestra Palabra Radio Show on 90.1 FM, KPFT. 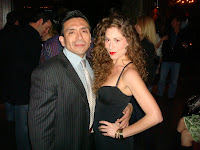 Nuestra Palabra has organized the largest book events in Houston, ranging from book signings for the likes of Sandra Cisneros, and Pulitzer Prize Winner Junot Diaz, to stars such as Cheech Marin, Oscar De la Hoya, and Edward James Olmos.

Tony, we all felt outrage at the announcement of what Tucson School District did. How did you so quickly move from outrage to this great concept?
The radio show I work with, Nuestra Palabra: Latino Writers Having Their Say, is 13 years old. We have 156 months of working with new writers, legendary writers, and folks who just plain love literature and cultura.

How many authors are standing with Librotraficantes now?
There are many. I ask anyone that I overlook at this second to forgive me. Some writers who are on board: Luis Urrea will meet us in San Antonio and ride the caravan into Tucson. He is writing a magazine feature on the trip. Sandra Cisneros is hosting us in San Antonio. She also made a large donation to subsidize the caravan and will also be with us as we cross the border into Tucson, on Friday, March 16. Carmen Tafolla will read in San Antonio. Wings Press will republish her book CURANDERA, which was banned in Tucson. They are donating copies for us to take to Arizona. Dagoberto Gilb has been a huge supporter, as well, and has been promoting the Librotraficante Caravan all over Texas and the U.S. Beloved writer Denise Chavez, who also organizes the Border Book Festival, will host us in Mesilla, New Mexico. Rudolfo Anaya author of the seminal novel BLESS ME ULTIMA-which was banned in Tucson-endorsed the caravan, donated, and also will receive us when we arrive in Alburquerque. He will give us the bendicion before we cross into Tucson. Manuel Munoz is helping us organize in Tucson. There are many, many others.

I know you’re the guiding hand behind this movement, but one man can’t do something like this by himself. Who are your partners in crime?
We have a huge base of talent in Houston that we have been working with, cultivating in Houston for 13 years. Many of these folks did their first readings at our Monthly Showcases when we first started 13 years ago. Again, I apologize for those who I will overlook at this particular moment. Librotraficante LiLo, AKA Liana Lopez is the producer for our radio show. She is also a 9 year veteran of Nuestra Palabra and helped us organize our huge Houston Book and Family Festival, which drew over 30,000 people. She is in charge of media and reaching out to our national network of allies for the caravan route. Librotraficante HighTechAztec aka Bryan Parras is our board operator for our radio show. He too is a 10 year Nuestra Palabra Veterano. He is also in charge of networking with social activists organizations and has organized caravans before with SWOP-Southwest Organizing Project.Two other groups that were also intrumental with the USSF Caravan were Southwest Workers Union (SWU) in San Antonio and Southern Echo in Mississippi. They are part of a larger coalition working on Black/Brown unity and have been incredibly supportive of our work here in the South and Southwest. Bryan also shot the original Librotraficante video. Librotraficante Lips Mendez AKA Lupe Mendez is in charge of our slam poetry presentations and also teacher outreach. He has 12 years of experience with Nuestra Palabra. Librotraficante La Laura, AKA Laura Acosta is in charge of working with universities and colleges and networking with Chambers of Commerce. She is president of the Baytown Chamber of Commerce, and a 10 year veteran of Nuestra Palabra. There are many, many more.

How can readers help with this project?
There is a volunteer pyramid on the Caravan Schedule section of our website. I would ask folks to please download it. We need volunteers at each stop of the caravan. We need volunteers to spread the word, especially via blogs, Facebook, Twitter and websites. If Arizona had banned our literature ten years ago, we would not have heard about it. But because of new media, we have, and we can respond with the time-honored tradition of the caravan. New media is saving classic media--books!

We also need help raising funds to rent buses that hold 55 people at once, for a full week, which requires 2 drivers. We would ask folks to please donate to our Kickstarter program, or via the Pay Pal donation button on our website or to organize fundraisers. We also ask folks to donate copies of the banned books so that we can give them away in Tucson, as well as other points along the itinerary. We thank everyone for their support. It means a lot.

Thanks for answering, Tony, and for coming up with Librotraficantes, which gives us a creative outlet for all that anger this has stirred up inside of all of us.

The Librotraficantes caravan is intended to:

1. Raise awareness of the issue. Some people still do not know that Latino Studies is being banned in Arizona.
2. Promote the books of banned Latino authors: Hispanic writers are not promoted well enough. This is a chance to bring attention to their work.
3. Celebrate many cultures: Children of the American Dream must unite to preserve the civil rights of all Americans


Posted by Linda Rodriguez at 5:33 PM