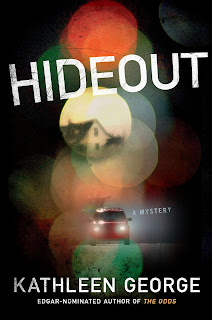 For the initial profile in this series, Kathleen George seems perfect. Her fiction career started with a critically praised collection of literary short fiction, The Man in the Buick. George, who is an academic, did not follow that with a literary novel in the usual manner of academic writers. Her first novel was a tightly plotted, well-written thriller, Taken, which has turned into a highly regarded series of thrillers set in Pittsburgh. Her latest, Hideout, has just been released, but George kindly took time in the middle of book tour to do an interview for this series.

Kathleen George was born in Johnstown Pennsylvania. As a child, she wanted to be a writer. She wrote stories and plays in high school and in her undergraduate years as a creative writing major at the University of Pittsburgh. She went on to earn a Ph.D. in Theatre (also at Pitt). By then she had made her home in Pittsburgh. For eight years she taught theatre at Carlow College, where she directed many plays. Then she accepted a teaching position at Pitt where she continued to direct and teach dramatic literature and playwriting; in the early 80s, she began to add fiction writing back into the mix. In 1988, she earned an M.F.A. degree in Creative Writing (also at Pitt!) on the side. She is a Professor in the Theatre Arts Department.

George has been granted fellowships at artists' colonies, including the VCCA and MacDowell. Her short fiction has appeared in journals and magazines which include Mademoiselle, Cimarron Review, North American Review, New Letters, and Alaska Quarterly Review. She has been nominated for a Pushcart Prize and one story was listed among the Distinguished in Best American Short Stories.

Her theatre publications are: Rhythm in Drama, University of Pittsburgh Press, 1980, Playwriting: The First Workshop, Allworth Press, 2008 (first in print with Butterworth (Focal Press) 1994), and Winter's Tales: Reflections on the Novelistic Stage, University of Delaware, 2005. 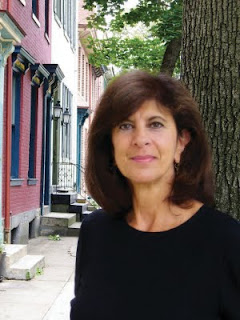 For those new to your series, can you describe the Pittsburgh Richard Christie mysteries?

Yes. Christie is a Commander in the Homicide Squad. He’s very well loved by his workers. He has a natural charisma. He’s not a party guy. He drinks but only in moderation. He once thought he would be a priest. So he’s bit of an odd bird. He’s naturally drawn to people and their stories, their needs. But he’s not as dull as that might sound. He has a big ego, which he’s always wrestling with. He has to force himself to toe the line when he often feels he knows what is best for people or for a case.

Other regulars on the squad and in the novels are Artie Dolan, a really good detective, and also Colleen Greer (new, smart, workaholic, sexy), and JohnPotocki, very smart, very literate.

Pittsburgh provides a rich setting for the series. There are so many interesting places—from parks to restaurants to ethnic neighborhoods. We have more bridges than Venice, lots of great old mansions, and whole neighborhoods with boarded up buildings. A lot of everything.

What was your inspiration for this series?

Some of the older crime novels. I’ve recently been aware of how much I was influenced by Marjorie Allingham’s The Tiger in the Smoke, and by Graham Greene’s Brighton Rock. And look what happened recently? Brighton Rock has been updated and adapted to a new movie. What I loved about these novels was the depth of character and the mix of good people and very bad people—both sides complex enough to keep the story from being a simple morality tale. I love that.

How would you describe Hideout to someone who has not read any of your previous novels?

There are some quiet sections in which you really get to know the characters and then there are scenes of hair-raising tension, so both moods and paces are part of my palette. The trigger event is a murder/accident. Ryan Rutter, high on drugs, drives to terrorize and when he hits a young mother going to work, he has to be on the run. He is helped in this by his younger brother Jack. Where do they go? Two hours north of Pittsburgh to a lake property where they break in to a house they once rented years ago. Just down the road lives Addie Ward, almost 83, up in her property alone since she wanted to get her garden in early. She’s nice, she’s vital, she’s . . . generous. She doesn’t deserve violence but it comes into her life in the person of Ryan.

I like to write every day, bad or good--who knows what the sentences are when you first get them down. I prefer to write from 4 a.m. to about 8 am. and then to move on to a regular day, but this schedule means going to bed early and that isn’t always possible. Sometimes the writing day has to be 6-9. Especially now that there is so much journalism about how good sleep is for the health.

Soon I will get my editorial letter for SIMPLE, which is the next novel (been done and sold for over a year now) and I will revise that. It’s got a political setting. I never did one of those before. And I actually have a new one drafted which I plan to revise a bit. It’s called BLOOD. I haven’t shown it yet. I have several more projects but I don’t know if I can get to them—essays and a text. We’ll see.

Growing up? Steinbeck, Hemingway, whatever my teachers told me to read. But after that, when I started studying and teaching theatre, the models became Chekhov, Shakespeare, Ibsen. I directed a good deal of Shakespeare and, man, did he know everything or what? I love that he puts the villains on stage and lets them tell you why they are malcontents and whom they want to hurt.

You started with literary short fiction. Your collection, The Man in the Buick, was highly praised. What inspired you to write your first novel, Taken? Had you always wanted to be a writer?

I had always always wanted to be a writer. No question. And I love short fiction. So I was happy writing it. But even though the stories in BUICK are kind of sober, I also wrote a comic story that got published in Mademoiselle and so many people loved my character and wanted me to write her into a novel that I spent many years trying to write a comic novel. One summer I gave up (too many drafts that didn’t fly!) and decided to entertain myself by teaching myself plot. So I began to make notes for a mystery. Then I wrote the mystery. That was TAKEN. It was a two-book contract so I had to write another one. I always do what is expected of me. Two mystery novels under my belt—that defined me.

Do you belong to a critique group of other authors. Or does your marriage to writer Hilary Masters help in that regard?

I hang out with other writers but we don’t critique. We laugh, we grumble, and some try out ideas. Once they did a round of critiques but I bowed out because I do that for a living. I tend not to show Hilary what I am doing unless and until it is very far along. He feels the same way. He likes to work in privacy.

I’d say read the kind of thing you would like to write. Not every writer agrees with this advice. Some fiction writers don’t read fiction. I do. I love falling into a story. I’d say read all the time, read every day. It really helps. We’re all in a conversation with other writers. That’s what we’re doing when we write.

What has been the hardest part about being a writer?

Hard? Not enough time. Never enough time. I often fantasized that if I got arrested and jailed I would at least be able to read and write non-stop. But then I visited a jail for research and I lost that fantasy. Jail is stinky and physically uncomfortable. I think I have to stay above the law.


Next post in this series on Friday will be Sandra Parshall. Monday will be the next in the Writers of Color series. Have a great weekend!
Posted by Linda Rodriguez at 10:45 AM