As I have mentioned before, many of the writers I list are friends or colleagues of mine. If I didn’t profile them, I’d profile many, many fewer writers and leave out some of the best. For today’s group of writer profiles, I must underline that caveat. One of the writers, Plummer, is my editor. I knew and loved her writing before she became my editor, and to refrain from listing her would leave a gap in the category of highly talented emerging fiction writers of color, so I choose to add her to the mix.

Virgil Suárez 90 Miles: New & Selected Poems (University of Pittsburg Press) Born in Cuba and raised in the United States, Suárez is one of the leading Latino writers of his time—in poetry, fiction, and memoir. In addition to his four novels, one collection of short stories, two memoirs, and nine books of poetry, he is also the editor of seven anthologies in which he brought Latino/a writers critical attention from the literary establishment. He is not only prolific but critically praised. His honors and awards include Best American Poetry, the Book Expo America/Latino Literature Hall of Fame Poetry Prize, The Daily News/The Caribbean Writer/University of The Virgin Islands Poetry Prize, the Florida State Individual Artist Grant, a G. MacCarthur Poetry Prize, and a National Endowment for the Arts Fellowship. His work has also been published in Argentina, Australia, Canada, Chile, Colombia, Cuba, England, France, India, Israel, Spain, Venezuela, and New Zealand.

The major theme of Suárez’s work is displacement and the alienation that occurs in those whose hearts and histories are divided between two places and two cultures. He uses the tight, powerful narrative of his fiction, the everyday language and vivid imagery of his poetry, his memoirs’ poignant longing for something gone that possibly never really existed to evoke that quintessentially American trait of always being from somewhere else. Suárez is another of the major writers of color who expends much energy in mentoring and assisting emerging writers of color, well-known for his broader understanding of Latino community than many other Cuban writers. He is currently a professor of creative writing at Florida State University, living in Tallahasee, Florida, and Miami with his wife and daughters. Here is the link for Suárez’s book. 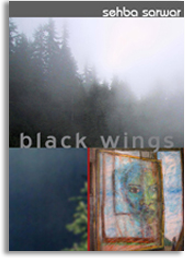 Sehba Sarwa black wings (Alhamra Publishing: Islamabad) Sarwa is a Pakistani American writer, artist, and activist. She divides her life between Karachi, Pakistan, the place where she was born into a family of artists, activists and educators, and Houston, Texas, the place she has adopted as home, recreating a community similar to the one in which she was raised. Her short fiction, essays, and poetry have been published in anthologies, newspapers, and magazines in India, Pakistan, and the US, and her artwork and videos have been displayed in India, Pakistan, Egypt, and the United States. Her beautifully crafted novel, black wings, deals with women’s issues, family issues that move down the generations, and the sense of being loosed from moorings that living and moving between worlds brings. A member of the Macondo Writing Community, Sarwa is the founding director of Voices Breaking Boundaries (VBB), an organization that brings the voices of artists and writers from around the world to the table with the goal of broadening people’s paradigms and perspectives, and created an after-school writing workshop, Making Noise, for young girls whose voices are usually silenced.

I usually prefer to send you directly to the publisher, but since this publisher has no website, here is an online source for Sarwa’s book. 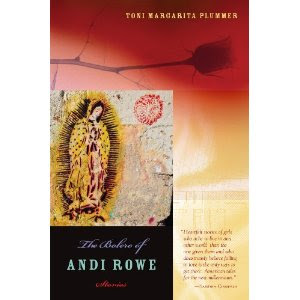 Toni Margarita Plummer The Bolero of Andi Rowe (Curbstone Press) Daughter of a Mexican mother and American father, Plummer’s debut collection of short stories, The Bolero of Andi Rowe, won the prestigious Miguel Marmól Prize. Her dreamlike yet sharply detailed prose brings to life the intertwined lives of young women caught between the expectations of others and their romantic dreams. In light of the caveat above, that’s all I’ll say, except find the book and judge for yourself. Plummer grew up in South El Monte, California and attended the University of Notre Dame and the Master of Professional Writing Program at USC. She is a fellow of the Macondo Foundation, an association of socially engaged writers, and an Editor at Thomas Dunne Books/St. Martin's Press, where she acquires fiction and nonfiction, especially crime fiction and women's fiction. She lives in Brooklyn.

Here is the link for Plummer’s book.

This Friday, the Literary Mystery Writers series will continue with an interview with Sandra Parshall. Next week, the Writers of Color series will be back with Luis Alberto Urrea, Anastasia Tolbert, and Rich Yañez. I hope you’re all finding some good reading here. Till Friday.

Posted by Linda Rodriguez at 10:24 PM