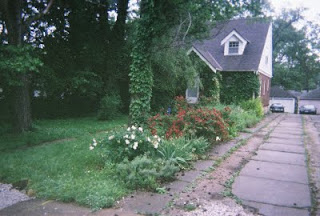 It's spring in Kansas City. As many of you may recall, last year I was summoned to court by the city over my garden. I said then that I would take photos of it in bloom in the spring to show the next time that happened, and I promised to post them on this blog.

So here we go. And here's the list of what my gardens contain, front and back, though not all of it is blooming now, of course.

Much of that will not be blooming for another month or more, and the woodland plants bloomed much earlier. I should have taken these photos a few days earlier before the rains knocked 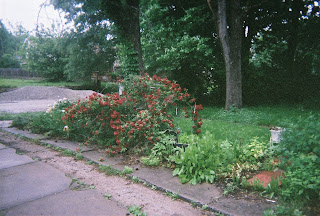 blooms off the peony and the iris. And, of course, many of the native plants I have don't bloom until much later. As you might expect, I have a wide variety of birds, including bluebirds, goldfinches, and hummingbirds, plus butterflies, four kinds of bees, etc. visiting and living in my yard.
I also mentioned when I was battling the city last summer that a different department of the city was trying to persuade everyone in my part of the city to put in gardens much like mine in place of the environmentally destructive grass lawns they all love so much. The folks at the court had not heard anything about this, but I was able to bring in brochures and correspondence to prove it, and that helped. Still I had to pay a fine and plead guilty to having a nuisance yard. The city prosecuting attorney made it as low as possible, but given the city's ordinances, he had no other choice than to go for it. (In Kansas City, any plant over 12 inches tall can be declared a nuisance by your neighbors or the city yard police, even roses, peonies, iris, etc.!, and they can do all kinds of terrible things, including throw you in jail for it.) 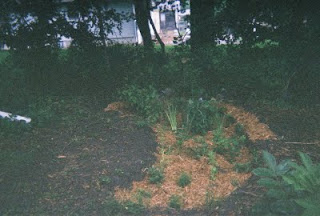 Now, to the punch-line.

That other arm of the city governmental bureaucracy sent me a letter saying they wanted to put a raingarden in my yard. $450 worth of native plants--they gave me a list to choose from and I already had two-thirds of them that I had been cited for growing--plus the cost of the topsoil and sand and additives and all the labor of digging and planting. I said sure and chose all the native plants I didn't have. Here you see the raingarden they just planted in my backyard.

Already, my next-door neighbor, who hates nature, has been leaning over the fence pointing to the newly planted raingarden, so I expect something from the other arm of the city soon. I have all the correspondence on the raingarden, and this time, I have an ally--the guy who planted it using EPA money given to the city just for this purpose. He will come to the court with me and explain.

So, the garden wars continue. How will I fare this year? Being the fool that I am, I am hopeful. Being as old as I am, I am wary. But so far, I consider myself undefeated. Honey, the South ain't got nothin' on me!
Posted by Linda Rodriguez at 3:03 PM