Books of Interest by Writers of Color: An Interview With Poet John Olivares Espinoza 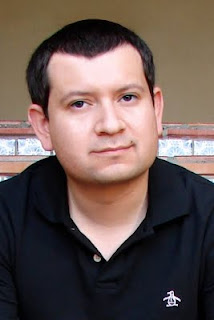 This interview of John Olivares Espinoza took place in 2009. It is being published here for the first time.

I first met John Olivares Espinoza at Macondo after already arranging to bring him to Kansas City for a reading with Francisco Aragón and Brenda Cárdenas. We had several long conversations then about the writing life and again when he visited Kansas City. John is a thoughtful, soft-spoken man, who reflects deeply on what it means to give your life to this undertaking of writing the best you possibly can. It was truly a pleasure to interview him.

John Olivares Espinoza is the author of The Date Fruit Elegies (2008), the inaugural collection in Bilingual Press/Revista Bilingüe’s new poetry series, Canto Cosas. In 2009, The Date Fruit Elegies was a finalist for the Northern California Book Award in poetry. Espinoza was born and raised in Indio, California to Mexican parents. He holds degrees in creative writing from the University of California, Riverside (B.A.) and Arizona State University (M.F.A), where he spent time writing about his experience working as a gardener with his brothers and father in the nearby resorts. John and his wife live in San Jose, California, where he teaches at the National Hispanic University.

LR: Your first full-length poetry collection, The Date Fruit Elegies, was the first in the new Latino poetry series, Canto Cosas, from Bilingual Press/Revista Bilingue. How did that come about?

JOE: It was a mix of not giving up and friends not giving up on me. I had been submitting my first manuscript to contests for years before Bilingual Press picked it up. The manuscript placed as finalist or semi-finalist here and there, and after a while I even started sending out queries to presses I thought I might have a chance with, but they politely declined.

At some point during graduate school I met Francisco Aragón, a poet, and at that time he was starting up his small press, Momotombo. Early on he had supported my work and manuscript while I was still in graduate school, pointing me in the direction of contests of whose judges I might have a shot with. At the AWP writers’ conference, he had even set up a private meeting with Sandy Taylor of Curbstone Press just before Sandy passed away. Curbstone took a pass on the manuscript. It was a blow to my faith in getting the book published. I was set with stashing the manuscript in my drawer and move on. Before long, Francisco was granted editorial oversight of poetry for Bilingual. This new series was to be called Canto Cosas. I guess Francisco thought highly enough my work that he took it into his own hands to expose it to a wide audience and make it the debut of the new Canto Cosas.

LR: You have a striking and unique cover for your book. Can you tell us the story behind it?

JOE: The cover art is from a loteria series by Gene Flores, and they are just a few of the dozens he has produced. The person who pointed me in the direction of Flores was Sergio Troncoso, who used Flores’ artwork for the cover of The Last Tortilla and Other Stories. The story of how Gene Flores came to be my second choice is an odd one.

In April of 2007, Bilingual Press flew me in for a pair of readings in Tempe and unbeknownst to me, the trip was also to talk about a potential book cover. From what I had heard, it was rare for an author to have a say on the cover art. It’s well known that Gary Keller, the publisher of Bilingual Press, has collected an extensive array of Chicano art for what I guess to be the Hispanic Research Center. Much of it has been collected in the beautiful two-volume set called Contemporary Chicana and Chicano Art. I worked with Linda St. John, an associate editor, in choosing the cover in her office. She had pre-selected several pieces for me from CCCA and there was one that floored me. It was a painting of a skeleton in mariachi get-up strumming a guitar by George Yepes entitled “La serenata.” The truth was that the image itself had very little to do with the themes of my book, except for maybe the section of elegies, which does not wholly make the book. But it would have made for a striking cover, and one that my mom would have to set face down on her nightstand.

George Yepes is the unofficial artist for Latino Hollywood. One of my favorite filmmakers, Robert Rodriguez, collects his art. I was excited to find out that Rodriguez actually has a copy of “La serenata” hanging in his bedroom (which is kind of creepy). Perhaps with this Yepes connection Rodriguez would hire me as a studio poet. Bilingual then solicited Yepes’s permission to use the artwork, but Yepes asked to read my poems first. Yepes responded by declining the rights citing that there’s a possibility that Rodriguez might use the art in an album cover as he had with other Yepes pieces. But instead, Yepes suggested, that he create original art for my work. I was so excited. Unfortunately, Bilingual had a deadline to meet with the book, plus there were no funds to commission a cover. After another failed appeal to use “La serenta,” we moved on with my suggestion to use Gene Flores. The designer made an extraordinary cover that I am happy with, as well as so many other people, 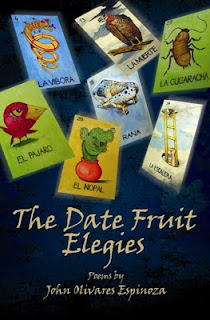 
LR: Many of the poems in The Date Fruit Elegies arose out of your father’s work as a gardener and your own work with him when you were a child and adolescent. Reading the poems, it becomes clear that your relationship with your father in those years was complex but close. Was that difficult to write about?

JOE: At first it wasn’t difficult at all. At that time I was writing those poems in an undergraduate workshop and later in early graduate writing workshops. Back then I had a limited perception about audience. I really didn’t think that those poems would reach an audience outside of those 10, 15 people in the workshop. Now I have to second think how I represent members of my family in my poetry, as that is all an audience goes by. At a workshop in Macondo, Denise Chavez said about writing: “Do no harm.” It’s an adage I follow. Personally, I don’t have a problem writing poetry charged with emotion, but I have to be considerate to others.

LR: What theme or organizing principle, if any, did you use in putting the book together?

JOE: The habits we have now are one we picked up as kids. Working landscape with my dad was about near-perfection. For example, when we planted flowers in the soil during the fall, I wanted to plant the flowers any which way. My dad would not have any of that. If he saw that our flowers were being planted in a crooked line, he’d have us dig them out and plant them correctly. Even though it was a dirty job, he approached his work with nice, neat, and clean in mind. Although it may not have appeared it to anyone else, the work my dad did was deliberate.

The first draft of my manuscript had no sections. I think I may have ordered them by favorites first. Remember I was young writer with much to learn about putting a manuscript together. As I got better read and consulted friends and teachers, I began to shape my book by my work’s major themes. So the first section of the book is about growing up in California, the second are the elegies, the third are the prose poems, and lastly, a section about work. These were the themes that I wanted to represent in my first-book, which in turn represents me. With the habit I picked up as work as a kid, I wanted to achieve a “perfection” in the book, one that has every poem speak to the next and is deliberately placed. I had my flowers lined up, my weeds pulled out.

LR: In 2009, The Date Fruit Elegies was a finalist for the Northern California Book Award in poetry, a high achievement for a first book. What’s next for you as a writer and teacher?

As far as my teaching, I don’t know. Right now there are a lot of hiring freezes, or where they’re hiring, it’s freezing. Hopefully something suitable will come up for me.

LR: What encouragement and advice do you have for students and emerging writers?

JOE: You have to be in this profession of writing for the long haul. I feel there’s too much pressure for fame and veneration put on budding writers. I notice that’s the kind of language coming out of Poets and Writers and especially blogs: “The Best Poets to Come Out of Preschool” or “The Ten Under Ten.” There doesn’t seem to be a sense that being a writer, a good one, takes a lifetime of craft. Surely some have talent right out of the gates, but I’ve seen mediocre poets mature into writing astonishing verse because of hard work. I wish we treated poetry more like martial arts. New writers should focus on the writing and less on publishing and winning contests.

Back to the usual format with next week's post in my series on writers of color. Tomorrow (if I can conquer the tech) I'll post my radio interview with Michael Medrano and David Campos on Pakatelas!
Posted by Linda Rodriguez at 10:05 AM