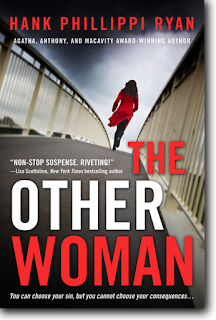 My new favorite book is The Other Woman by Hank Phillippi Ryan. It’s a tight, suspenseful read with well-wrought characters, a complex plot, and writing that brings the world of Boston politics alive. It’s a book that kept me turning the pages to find out what happened next and then had me opening it from the beginning again because I didn’t want to leave her well-crafted people and world.

The Other Woman, comes out in hardcover September 4 from Forge. A starred review from Library Journal says “a dizzying labyrinth of twists, turns, and surprises. Readers who crave mystery and political intrigue will be mesmerized by this first installment of her new series.” It also received a starred review from Booklist.

Jane Ryland was a rising star in television news—until she refused to reveal a source and lost everything. Now a disgraced newspaper reporter, Jane isn’t content to work on her assigned puff pieces, and finds herself tracking down a candidate’s secret mistress just days before a pivotal Senate election.

Detective Jake Brogan is investigating a possible serial killer. Twice, bodies of unidentified women have been found by a bridge, and Jake is plagued by a media swarm beginning to buzz about a “bridge killer” hurting the young women of Boston.

As the body count rises and election day looms, it becomes clear to Jane and Jake that their investigations are connected…and that they may be facing a ruthless killer who will stop at nothing to silence a sandal.

With its dirty politics, dirty tricks, and a barrage of final twists, The Other Woman is the first in an explosive new series. Seduction, betrayal and murder—it’ll take a lot more than votes to win this election!

Here’s a link to buy The Other Woman.

And here’s THE OTHER WOMAN video! 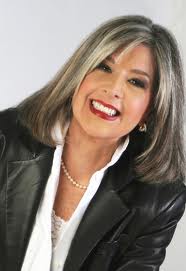 HANK PHILLIPPI RYAN
Hank Phillippi Ryan is the on-the-air investigative reporter for Boston’s NBC affiliate. Her work has resulted in new laws, people sent to prison, homes removed from foreclosure, and millions of dollars in restitution. Along with her 28 EMMYs, Hank’s won dozens of other journalism honors. She’s been a radio reporter, a political campaign staffer, a legislative aide in the United States Senate and an editorial assistant at Rolling Stone Magazine working with Hunter S. Thompson.
Her first mystery, the best-selling PRIME TIME, won the Agatha for Best First Novel. FACE TIME was a BookSense Notable Book, and AIR TIME and DRIVE TIME were nominated for the AGATHA and ANTHONY Awards. Hank’s short story “On the House” won the AGATHA, ANTHONY and MACAVITY.

How would you describe The Other Woman to someone who has not read any of your previous novels?

I love that Julia Spencer-Fleming called it The Candidate meets Basic Instinct. I’ve called it The Good Wife meets Law & Order. A Booklist starred review (!) calls it “The perfect thriller for the election season.” It’s a fast-paced page-turner about a reporter on the trail of a candidate’s secret mistress. Who is the other woman? And if a candidate is having an affair—should the reporter make that public?  And its the first in a new series, so readers are starting at the beginning. Fans of Lisa Scottoline and Harlan Coben will love it, I hope!

Growing up? After I finished all those little blue biographies (Dorothea Dix--Girl of the Streets, Mark Twain--Boy of the Mississippi) I read all the horse books, Black Beauty and King of the Wind and Misty of Chincoteague. Then the magic books, E. Nesbit and Edward Eager and Jane Langton. Of course, Nancy Drew and Donna Parker and Vicki Barr, girl stewardess.  (Remember?) All the Arthur Conan Doyle Sherlock Holmes stories. When our library had a who-can-read-the-most-books contest, you know me. I was in it to win it.  Then one day I sneaked MARJORIE MORNINGSTAR from my parent’s shelves, and then TEN NORTH FREDERICK, and then—FAILSAFE. Whoa. Thrillers! Then ALAS BABYLON.  ON THE BEACH. SEVEN DAYS IN MAY. And my life was never the same.

Influences now?  I’m a huge fan of Tom Wolfe, from The Right Stuff to Bonfire of the Vanities. I adore Stephen King, and consider The Stand as a life-changing book for me. Edith Wharton’s  Custom of the Country and House of Mirth.  Dennis Lehane. Lisa Scottoline.  Tess Gerritsen. Harlan Coben.

What inspired you to write your first novel? Do you think your background as an Emmy-Award-winning investigative reporter drew you into the mystery field rather than another genre?

Oh, I’ve always wanted to write mysteries, from my first Sherlock Holmes! But I just never had a good idea for a plot. (Problem, huh?) But when I finally did—at age 55!—I became obsessed with writing fiction.

And I do love how similar it all is—in investigative reporting and crime fiction, you’re tracking down clues, following leads, looking for compelling characters with a wonderful and important story to tell—hoping the bad guys get what’s coming to them, and the good guys win. You’re searching for justice and to change the world a bit.

So crime fiction and investigative reporting connect in a very essential way.

Someone asked me once if I could write a romance novel without a mystery—and I asked--what would the characters DO? I guess I’m a suspense writer at heart.
What's your writing process? What is a typical writing day like for you? Do you keep to a set schedule? What are your writing habits? How do you juggle writing books and your demanding television job?

There’s no typical, there really isn’t. I work 9 to 6 as a reporter every weekday, and concentrate on that. Given that--it doesn’t leave me to write my fiction.  I have to be very focused and very organized. NO excuses, no procrastination. No vacations.

Ah! THE OTHER WOMAN is out right now! I am crazy-busy, trying to type with crossed fingers as I hope people love it and—gasp—actually buy it. The reviews are stellar, for which I am relieved and incredibly grateful.

And I just sent book two in the Jane Ryland/Jake Brogan series to the publisher—right now, it’s called THE WRONG GIRL.

Nope. No groups, no partners, no nothing. I’ve written for 30 years as a reporter with editors and producers, so I’m confident I know what I’m doing on the first draft! After that, I have two professional editors read my work. That’s it, before it goes to the publisher. My editor at Forge is brilliant, so we also work on the books together.  I love to do tweaks and edits, it’s so wonderful to see the book emerge!

Write what you love. Write what you would read! That’s so important. It’s very very difficult—and every truly successful author I’ve ever talked to about this admits to days when they despair—when they really think they stink. EVERYONE. So on a day you’re having a tough time, pat yourself on the back. You’re a writer—because every writer feels that way. Then just—go on.

Patience! Is the answer to both.  Unlike day-to-day television reporting, writing is a long haul. It takes a long time to write a good book! The most important thing is to persist, get better, trust yourself, and be incredibly grateful to friends—like you, dear Linda—who are enthusiastic and supportive along the way. Nothing happens overnight. (Except sometimes…you get a good idea!)

You can connect with Hank Phillippi Ryan on Facebook, Twitter, and Jungle Red Writers at the links below.