That Old Black Dog of Fear

The prejudice against black cats and dogs goes back a long way to old superstitions about them being the devil’s animals and being bad luck. I could trace these legends back to their beginnings in the battle between religions where the animals were simply used as props and propaganda weapons by the warring sides, but I’m not going to burden my blog with that today. It’s a shame that companion animals have to be dragged into our human quarrels in this way.

The only thing sadder than a rejected black pet is an older cat or dog who’s also black. No one wants these. You combine the prejudice against older animals with the prejudice against black animals and come up with a stone wall these cats and dogs can’t get over, no matter how sweet, cute, bright, well-behaved, and gentle they are. If you talk to anyone in the rescue business or look on any of their websites, you’ll quickly find that this is a sad, basic truth in the world of those who care for and try to find permanent homes for older, black pets.

The silliest part of it, to me, is that the pet doesn’t even have to be all black, certainly not if it’s a dog. Check out your local humane shelter’s “black dog sale,” and you’ll find that dogs that are only part black are included in the sale because they’re included in people’s prejudices against black animals. My own rescue dog is a Plott hound with the typical brindle brown coat, but because he has a black saddle on his back, he was deemed a black dog and unadoptable. 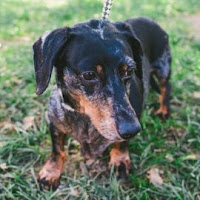 Rescue and shelter animals have enough prejudice against them. Every year, approximately 3-4 million cats and dogs are euthanized in shelters. These are animals people gave up and threw out, or the offspring of such animals. It’s getting worse because many families have lost homes and been forced to move to apartments that refuse animals, causing them to surrender family pets if they can’t find friends to take them. Yet still, people pay big bucks to buy dogs and cats from breeders—and oddly enough, many of those wanted, purchased purebred dogs and cats (but more often dogs) find their ways into shelters around the country. I’ve been taking in shelter dogs all my adult life, and I’ve noticed a big change there. It used to be rare to find a purebred animal at a shelter. Now, they’ve all got some, and often quite a number of them.

I can’t stress enough how important I feel it is to give homes to shelter/rescue cats and dogs, if you can and if you are looking for a pet. They make grateful, loyal, and affectionate pets, and you’re quite literally saving a life when you do. And while you’re looking for a good pet at your local shelter, please, please don’t bypass the older, black animals in your search. Older, black cats and dogs are at the highest risk of being euthanized because no one wants them. Take one home and bask in its love and affection. You’ll be glad you did as the years in company with your faithful pet slip past.

Posted by Linda Rodriguez at 11:25 AM