Ruth Behar, An Island Called Home: Returning to Jewish Cuba (Rutgers University Press) Behar’s latest book is the beautifully illustrated story of her journey back to the island she left for the United States at age five. She seeks traces of Jewish life and spirituality in the land of Fidel Castro. What has survived? And what has been lost? Her search is accomplished and recorded with the compassion and keen observation for which Behar is famed in her groundbreaking anthropological studies, but it is the poet Behar who brings to life the people who struggle to care for the legacy of Judaism in Cuba.

Behar is probably most famous for her work in anthropology, which transformed that field of privileged observers with such revolutionary works as Translated Woman: Crossing the Border with Esperanza’s Story (Beacon Press) and The Vulnerable Observer: Anthropology That Breaks Your Heart (Beacon Press). She has edited pioneering literary anthologies of Cuban and Cuban American writers and of women anthropologists whose artistry informs their ethnography. Her own poetry, stories, and essays have been published in a wide variety of prestigious journals and anthologies. She wrote, directed, and produced an 82-minute documentary, Adio Kerida/Goodbye Dear Love: A Cuban Sephardic Journey, which has been shown to great praise in film festivals around the world. Behar has received a McArthur Foundation “genius” grant, a Guggenheim Fellowship, a Fulbright, and many other awards.

As with so many of the established writers I profile, Behar gives generously of her time and energy to help emerging writers and ethnographers. She teaches writing workshops in Tijuana, at the Macondo Writing Workshop, and even offers a workshop in creative ethnographic writing at the annual meeting of the American Anthropological Association. She is Professor of Anthropology at the University of Michigan, where she is also affiliated with programs in Women’s Studies, Latina/o Studies, Latin American and Caribbean Studies, and Jewish Studies.

Here is the link for Behar’s most recent book. As always, I encourage you to order it from the university press which published it. Small independent and university presses publish the vast majority of the books by writers of color. We need to support the presses that bring these wonderful writers to us.

Stanley E. Banks, Blue Beat Syncopation (BkMk Press) Banks’ fourth book, Blue Beat Syncopation, collects the best of twenty-five years of his poetry. A product of an abusive home in some of the meanest streets in Kansas City, Missouri, Banks writes a number of poems about his bootlegger grandmother with a pistol in her pocket, who gave him the chance and strength to aim for something more. He writes about the number of his family members who have died of violence or are in prison and the hopelessness that infects whole communities.

In an interview, Banks has said, “I was born in the shit-house. You can take that and become bitter and mad and angry at the world. Or, you can take it and say, so I wasn't promised anything, I wasn't given anything, but I'm going to make something better of my life somehow and influence people in a positive way.” With his poetry full of the music of jazz and the blues and the pain of the impoverished streets, as well as with his many years of teaching and work within underserved communities, Banks has made good on that promise. He received a National Endowment for the Arts poetry fellowship and Kansas City's Writers Place Award. His first poetry collection, On 10th Alley Way, won the Langston Hughes Prize. He is artist-in-residence at Avila University and lives with his wife, poet Janet Banks, in Kansas City.

Here is the link to purchase Banks' book. 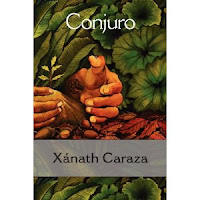 Xánath Caraza, Conjuro (Mammoth Publications) Caraza’s first book-length collection of poetry is a tri-lingual text using Spanish, English, and Nahuatl. Her poetry carries the heartbeat of the oral traditions from which she springs and the places she has visited, celebrating the word as music. Originally from Xalapa, Veracruz, Mexico, Caraza has lived in Vermont and Kansas City. She has an M.A. in Romance Languages and lectures in Foreign Languages and Literatures at the University of Missouri-Kansas City. Her chapbook Corazón Pintado: Ekphrastic Poems (2012) was published by TL Press. She won the 2003 Ediciones Nuevo Espacio international short story contest in Spanish and was a 2008 finalist for the first international John Barry Award. Caraza is an advisory member of Con Tinta and a former board member of the Latino Writers Collective.

Here is the link to buy Caraza’s book. Mammoth Publications is a Native-owned press, so please support them. If we can develop more presses owned and run by writers of color, we will see more writers of color published.

This is the first full writers of color post I've done in a while. These are very labor-intensive, and demands on my time have grown. I will still do these from time to time, but I will be offering as part of this series single book reviews or notices of awards for writers of color more often. To keep to the format with which I began this series would guarantee that I'd hardly ever post another entry in it. I still hope to get through my long list of fine writers of color, even as more are added, but I will have to do it in an easier format most of the time.
Posted by Linda Rodriguez at 8:47 PM