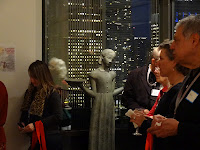 Thursday night at AWP in Chicago, I was a co-host of Ragdale @ AWP, a reception for Ragdale alumni. This was held in the penthouse (22nd floor) of the Cliff Dwellers, on Michigan Avenue facing the lake. Here are some photos of the spectacular view out the windows and from the huge terrace outside the penthouse. Thanks to Mario Duarte and Miguel Morales for these photos. 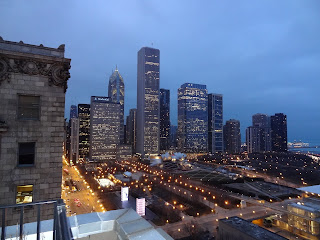 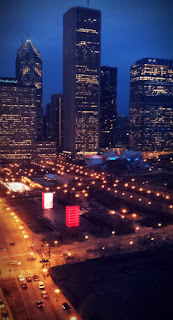 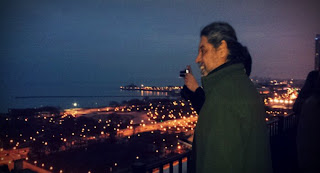 One of my dear friends, José Faus, stands on the terrace outside the penthouse to enjoy the view. I was fortunate to be able to invite a number of friends who are fine writers to meet the wonderful Ragdale staff. I hope all of them will apply for a Ragdale residency. I know most of them will. And I had the added pleasure of introducing people I love to one another. This was a joyous occasion, bringing people I love together with Ragdale, which I love. 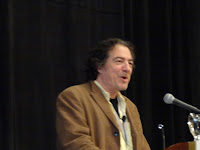 Another of my beloved organizations, Macondo, had a fantastic session featuring the incredible Dagoberto Gilb (pictured here) and Luis J. Rodriguez in a creative dialogue moderated by John Santos.

Since Luis and I were the only ones to staff our table, I had to remain in the book fair so that he could make this great session. We've decided that, at the next AWP, we will ask some other people to make commitments to help us with the book fair. 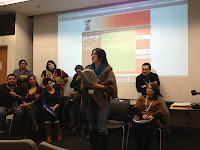 We had book signings all afternoon beginning with Michael Warr and ending with Gloria Vando. Unfortunately, I don't have photos of those. They were quite popular, and we sold books, which is the purpose of such things. Our authors had a lot of fun with them, too.

Right after the book fair closed, I hurried down Michigan Avenue to Columbia College to give a joint Latino Writers Collective-Proyecto Latina reading. Here is Diana Pando, one of the Proyecto Latina masterminds, reading with the rest of the readers in the background.

We had a receptive audience of approximately 30 men and women, which surprised me since we were competing with dozens of other AWP offsite readings. The audience was illustrious with

Francisco Alarçon, Odilia Gálván Rodríguez, Diana Garcia, Carlos Cúmpian, and many other powerful writers. The material read, poetry and fiction, was strong, humorous, and dramatic, and afterward everyone enjoyed visiting with friends not seen for a long time.


Saturday morning, Ben and I had breakfast with Francisco Aragón and Luis before Ben left for the BkMk table and Luis and I headed back to the Tia Chucha/Scapegoat table. 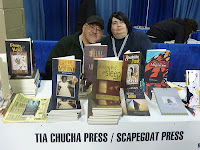 On Saturday, the general public is allowed into the book fair, and it became truly hectic. By this time, I was losing my voice, and I had a panel coming up at 3:00 with other members of the Latino Writers Collective to discuss our writing workshops with the children of migrant workers. I'd been sucking on cough drops earlier, but Saturday I survived on herbal cough drops. 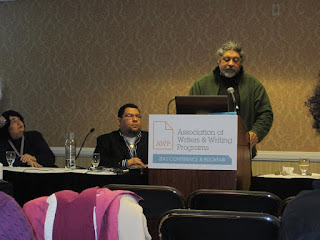 Here is part of our panel, right to left, José Faus, Miguel Morales, and me. Not shown in this photo, Gabriela N. Lemmons.

This panel is concerned with a central project that the LWC is involved with. The work we've done with these children of migrant workers has been emotional, draining, and satisfying since our first session with them. During our meeting back in Kansas City to prepare for the panel, we swore to each other that we wouldn't cry at the AWP, even though the stories and memories always throw us into tears. As we explained the program and the impact it had on these kids, as well as their great need, we each at one time or another broke our promise, but the audience cried also.

It was the next to the last session on a day when many attendees have already left, so it was a small audience--but such a passionate and involved audience! We felt grateful to be able to have a discussion with such attentive people.

I had to apologize since my voice was mostly gone--from three solid days of speaking to thousands of people a day in the book fair, I thought. This panel brought one more reward for me. Joy Castro and I have been communicating on Twitter and by email but had never met in person. Joy had shown up at the book fair on Friday, and we met. Now, she came to our panel, and Mario Duarte caught a photo of us together. 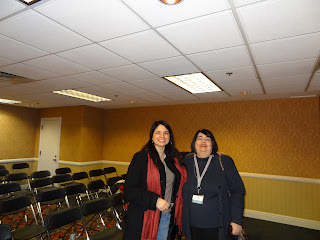 And that's an appropriate place to end. We left after the panel, and the great joy of AWP, as always, was seeing so many dear friends, most of whom were not photographed. Deborah Miranda, Ahimsa Timoteo Bodhran, Susan Deer Cloud, Ruth Behar, Allison Hedge Coke, Travis Hedge Coke, Susan Page Tillett, Regin Igloria, Eduardo Corral, Richard Blanco, Sherwin Bitsui, Maria Melendez, Alice Friman, Marilyn Kallett, Robin Becker, Judith Podell, Alexandria Marzano-Lesnevich, Charles Rice-Gonzalez, Ching-In Chen, and many others. For some of us, far-flung across the states, AWP is the one time we get together. And it's what I always look forward to the most. My one regret this time was not having a chance to attend anyone's panels. Next year, we'll fix that, though. So good-bye , my friends, it's email, Facebook, and Twitter until we meet at the next AWP again. Next year in Boston!
Posted by Linda Rodriguez at 12:23 PM