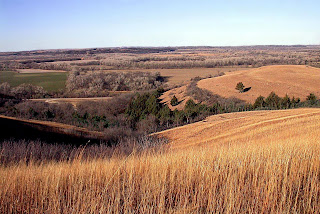 One of my favorite places on the planet is the Flint Hills of Kansas. The Flint Hills is the largest surviving Tallgrass Prairie in the country, 4.5 million acres of bluestem and wild animals and cattle and tough people, all survivors. I went to school there, and my parents are buried there.

My computer operating system keeps showing me scenes of landscape from around the world that are supposed to be breathtakingly beautiful, and they often are. Still, I know people who drive I-70 west or east through the Flint Hills and insist that the Kansas landscape is just flat and boring. I insist that they must be lying or blind. The Flint Hills inspire me so much that I've written a number of poems about them, and I thought I would put this one up for National Poetry Month to remind us all of the quieter beauty that often surrounds us while we are seeking after what we consider the exotic or fashionable.

The prairie is a tough place.
Formed when the Rocky Mountain
rainshadow killed off the trees,
millions of buffalo grazed its big bluestem,
turkeyfoot, sideoats, switchgrass, grama, Indiangrass,
sweetgrass, prairie dropseed, buffalograss,
for millennia, but, big as a nightmare
when you encounter one up close,
the buffalo never defeated the prairie.

Summer in tallgrass lands is harsh—
blazing hot sun, only occasional rain in torrents.
Summer turns the plains into grassy desert,
But those grass roots plunge deep, deep into the earth,
some twelve or more feet under the surface.
The soil under a prairie is a dense mat
of tangled rootstock, rhizomes, tubers, and bulbs.
Those roots hold out against drought
and preserve the soil against thundering
gullywashers and toadswampers.
Summer never defeated the prairie.

Sometimes lightning strikes,
and fire races across the landscape
like water poured out on concrete,
spreading out with amazing speed and inevitability.
The prairie compensated by making seeds
that need to pass through flame to germinate.
Fireproof seeds, what an invention!
The tribes learned to set controlled fires
to bring back gayfeather, blazing star, prairie clover.
Now, ranchers burn the prairie each spring.
Fire never defeated the prairie.

As for winter, the waist- and shoulder-high grasses
triumph over the snow, spreading
large swathes of sun-colored grasses
across the scene, only occasionally punctuated
by a spread of snow along the meandering paths
where animal and human feet have trodden.
The prairie just absorbs the snow,
swallowing it down to build stronger, deeper roots
to withstand summer’s hot, dry onslaught.
Winter never defeated the prairie.

Buffalo, white-tailed deer, antelope, pronghorns,
gray wolves, coyotes, bobcats, cougars, red foxes,
black-footed ferrets, badgers, shrews, skunks,
raccoons, possums, black-tailed prairie dogs,
jack rabbits, prairie chickens, bull snakes,
and the occasional human for centuries
made trails and paths through the grasses
by trampling them down or cutting their stems.
If paths are not continually maintained
by a great deal of manual labor,
they disappear like smoke.
The prairie will always take them back.
The only thing that ever defeated prairie
was a man with a steel plow.
Published in Dark Sister (Mammoth Publishing, 2018)
Posted by Linda Rodriguez at 8:40 AM