SPELL FOR BANNING A BOOK, a poem for National Poetry Month 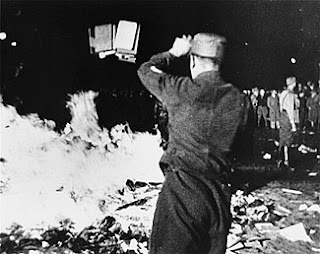 
We are living in times when the president of the United States tweets out his desire to censor newspapers, television news programs, entire sections of the press, and published books. So far, he has not succeeded in this, even though he daily tweets out his condemnation of “fake news” and his desire to change the libel laws to undercut the First Amendment, but the situation looks grimmer every month and week and day. It reminds me forcibly of the book burnings of the Nazi regime.


One of the earliest and most important steps a dictatorship must take is to seize control of the narrative. Thus, we see the multitude of lies and the constant accusations of fake news. The next step is censorship, which grants so much control over what the populace can know, and after censorship comes the destruction of books and magazines which contain the truth and not the regime’s propaganda. Along with this, we always find persecution of journalists and writers and poets who are not willing to spout the regime's line. Unfortunately, history gives us all too many examples of this through the ages. In the photograph at the top of this blog, Nazis are burning books in Germany.


This poem is about this process of banning books, which continues to be a threat down through history. Not too long ago, we had books by Latino and Native and Black authors banned in public school districts in the Southwest, which led to a band of activists gathering those forbidden books  and smuggling them across multiple states into those school districts to educate those children. This was called the Librotraficante movement and led to the courts reinstating those books in the school district. Vigilance is the price of freedom.

SPELL FOR BANNING A BOOK

First, find a censor.
This will be hard—
not that censors are rare,
but they are adept mimics.
Do not be fooled. No matter
how benevolent its disguise,
a frightened censor is dangerous.
Approach with caution.
To safely capture it
for your spell, you must circle
the censor chanting soothing
nonsense syllables.
It is meaning that terrifies
censors.

Surround the stupefied censor
with charms made from advertising
photographs of a mythical golden age—
smiling mothers
in high heels and aprons, silent fathers
keeping sentinel on horseback, sexless
children never asking
questions. Sacred to the censor,
such charms have power
to blind it.

Select the book
you want banned.
Set it outside the circle
of charms, and carefully
remove the charm nearest
so the censor can detect
the presence of an attempt
at meaning.

Protect yourself.
Enraged censors have been known
not only to ban books
but to burn them
and then press on to people.