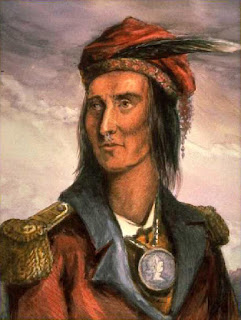 Tecumseh was the great Shawnee leader of the early 19th century, who had grown up in a time of constant warfare and continuing displacement of Indigenous nations from their lands by violent white settlers. He had a vision of uniting as many Native tribes as possible to stand against the flood of white settlers and save the traditional lands of the Shawnee and other nations. He had to convince other nations to join his confederation of nations, and we still have his prescient words to Pushmataha of the Choctaws when he worked to convince them to join, words that resonate with the history between his time and ours—and even with the actions of a pipeline corporation in North Dakota just last weekend.

"Where today are the Pequot? Where are the Narragansett, the Mochican, the Pocanet, and other powerful tribes of our people? They have vanished before the avarice and oppression of the white man... Sleep not longer, O Choctaws and Chickasaws... Will not the bones of our dead be plowed up, and their graves turned into plowed fields?"

Tecumseh was a man ahead of his time. He came close to achieving his dream, however. He united several of the northern tribes, including the Delaware, Potawatomie, Kickapoo, and Osage, but had little luck with the Southern tribes, except for a band of the Creek Nation that came to be called the Red Sticks. Had his brother, Tenskwatawa (also known as the Prophet) who was no warrior, not led a failed sneak attack on the American soldiers, and had Tecumseh not been drawn into the War of 1812 to be betrayed by the cowardly British general he was forced to fight with, I've often wondered if Tecumseh might not have been able to lead a united band of Indigenous nations to force the settlers back beyond the Appalachians and change the entire history of Native America. 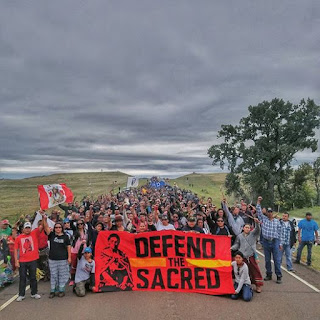 Recent events have left me thinking of Tecumseh and his dream of uniting the tribes in dealing with the settlers. Since April, a movement that began with the Standing Rock Sioux tribe offering peaceful but determined opposition to a potentially dangerous pipeline has increasingly drawn members of over a hundred other tribes and the formal endorsement and physical and financial support of over two hundred other tribes. The understanding of the sacredness and importance of water to all of us has led them to become Water Protectors, standing up to a powerful corporation and saying, “We will not allow you to endanger our water and the water on which millions of others depend, as well.”

The two camps of Water Protectors at the Cannonball River, Sacred Stone Camp and Red Warrior Camp, now contain over 5,000 people who have come from tribes all over the United States and Canada to join the Standing Rock Sioux in opposing the Dakota Access Pipeline. Recently, this situation had gone to court, and the court had said it would rule the next week. The Standing Rock Sioux delivered materials to the court, identifying an important burial site and other sacred lands lying in the proposed path of the pipeline, another reason its construction should be halted. The corporation sent out workmen over the Labor Day weekend to destroy those sites, in order to make them irrelevant to the case. When the protectors tried to stop them, private security employees assaulted them with pepper spray and attack dogs. The workers and security agents left, probably because of a news program and its video cameras, which recorded what they did, but the site was torn up and destroyed. As Tecumseh said so long ago, “Will not the bones of our dead be plowed up, and their graves turned into plowed fields?"

Still, the federal government has called a temporary halt to construction on the Dakota Access Pipeline. The fight is hardly over. The protectors are not leaving the camps. They are preparing for winter on the prairie. The gathering of tribes that they have built, however, is unprecedented, and I can't help thinking when I see so many relatives from so many different sovereign Indigenous nations gathered together, the flags of the more than 200 nations supporting this action waving above them, that, finally, Tecumseh's dream is coming true.

Posted by Linda Rodriguez at 11:52 PM