After listening to the horrible fascist talk by the Republican presidential candidate last night, I decided to post this essay I wrote about Latinos in the Midwest and about the last time we did this forced mass deportation/ethnic cleansing thing. 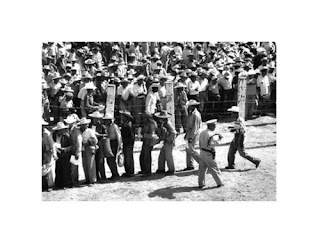 We’ve Been Here All Along: 13 Ways of Looking at Latinos in the Midwest

I listen for the broken truth that speaks of what’s been stolen, what’s been cracked and smashed. Bit by bit, I try to put together pieces, fragments of what was, stories for my children to live on. I refuse the blindness and forgetfulness that would render me acceptable in my country’s eyes, this country that lies about what it did to its indigenous roots, about who provides the necessary labor for all the luxury in which we live. Our comfortable lives are built on bones, and how we long to forget!
2
.
Here in the middle of the country’s heart, I live surrounded by the liquid names I love—Arredondo, Villalobos, Siquieros, Duarte, Espinoza. We are a secret pool in the middle of this dry, often drought-cursed Bible Belt, petitioners of La Virgen de Guadalupe and Tonantzin with tall flickering novena candles set out on household altars, devourers of caldo, horchata, albondigas with tongues that roll “r”s and hiss our “z”s, dark faces, eyes, hair among all these pale ones.
How did we come to be here in a land covered in ice half the year? How did we come to this place where no parrots fly free and flowers freeze to death? Surely it was not our doing.
3.
Though larger totals of Latinos were driven out of the border states during the Depression’s forced deportations, the usually isolated communities in the Midwest were hit the hardest—in some cases, losing over half their population overnight. Those remaining kept their heads down, hoping to avoid another violent outbreak. They made their children speak only English.
Though that had not mattered. Many of those shipped to Mexico were citizens who spoke English fluently and little, if any, Spanish.
The Midwestern communities became even more invisible. They just wanted to be left alone.
4.
When Federales chased Pancho Villa and his soldados over the countryside in and out of the small farms and ranches and the dusty little towns that supported them, each side of the conflict when it stopped for a rest would force all the men and boys in a village or on a farm to join its army. Worn out from the constant warfare of Mexico of that time, those men and boys—and their families—wanted to be left in peace. They fled to cities where men in suits from the north offered them money if they would migrate to the land of gringos to work on railroads or in meatpacking plants. The old streets-of-gold promise, and it sounded much better than getting shot in one army or another. Taking their families, they moved north to Chicago, Kansas City, and Topeka.
5.
Ironically, when the U.S. entered World War II and needed cannon fodder, politicians remembered those English-speaking, American-citizen kids that they'd forced from their own country. They sent military recruiters south. Large numbers of boys, driven by force from their country to a land where they didn’t speak the language and never fit in, signed up to go to Europe and the Pacific to fight for the country they loved—even if it didn’t love them.
If you didn’t read about this in your school history books, don’t be surprised. Neither did I. This whole episode was like the internment of American citizens of Japanese descent in camps during World War II. After the paroxysm was over, we as a nation only wanted to forget what we had done.
6.
The oldest Latino community in Kansas City, Kansas, was built around an entire village removed from Michoacan and settled into broken-down boxcars beside the Kaw River. When I was younger, you could still see the boxcar origins of a few houses in the Oakland community of Topeka, Kansas, and the Argentine district in Kansas City, Kansas. Around the core of boxcar, wood siding was added. New rooms and additions were built over the years to make real homes.
Few of these houses have survived the past four decades, but I still remember them, always surrounded with luxuriant vegetable and flower gardens in the tiny yard space around the houses—an emphatic statement of a people who could indeed make silk purses out of sows’ ears or real two- or three-bedroom homes out of broken-down boxcars.
7.
In 2007, Kansas City, Missouri, had a new mayor. He had just appointed a very active member of the local Minutemen organization to Kansas City’s most powerful board. I found the local Minutemen chapter’s website and read a call to go door-to-door in Kansas City, demanding to see proof of citizenship or legal status and making “citizen’s arrests” where the occupant could not or would not show these. It was clear from the rhetoric on the website that these would not be random visits but would target homes with occupants who had Spanish last names.
I took this threat personally. So when my friend Freda asked me to come to an emergency press conference to show solidarity, I did. Leaders of Chicano/Latino civic organizations formed the Kansas City Latino Civil Rights Task Force to fight this appointment. We were sure this would all end quickly. We were wrong, of course. It took over six months of constant effort, national groups cancelling conventions in the city, and the cooperation of African American, Jewish, and Anglo groups. 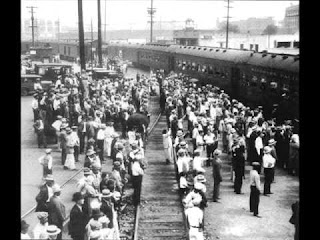 Posted by Linda Rodriguez at 5:35 PM