Existing While Brown or Black in America 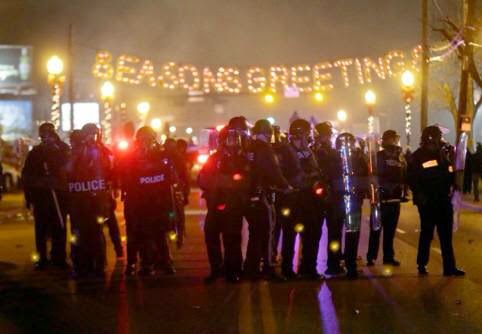 In light of what happened yesterday in Ferguson, Missouri, and the numerous comments I saw about how the police would never harass or harm anyone who wasn't doing something wrong, etc., etc., I'm reposting a blog I wrote for Writers Who Kill immediately after Michael Brown was killed.


In all the turmoil around #Ferguson, Missouri, right now, I notice the inevitable outcries from parts of the white community that the police wouldn’t shoot and kill Michael Brown for nothing, that he must have brought it on himself in some way by his own lawless behavior. Perhaps. We haven’t had a real investigation yet, and only when a stringent, trustworthy investigation has been made will we know all the facts of the situation. From the facts we do know, however, it looks unlikely that Brown did anything so major that it would have warranted taking his life. But to many white, middle-class people who are never hassled and threatened by police as they move through daily life, it seems that surely Brown and all these other unarmed African American, Latino, and Native men killed by police every year must have brought it on themselves through some fault of their own.

So allow me to tell a little story from my own life. In Kansas City, Missouri, where I live, the police used to be as undisciplined and out of control as the Ferguson and St. Louis police. A crisis finally forced the city to crack down, bring in a strong police chief to rebuild the force, and reorganize the police force around the motto of “Protect and Serve.” It’s not a perfect police force now, of course, but it’s plagued by less racial profiling and unnecessary civilian deaths than most urban forces today.

Back when Kansas City’s force was like the Ferguson and St. Louis departments we’re seeing on the news right now, pointing loaded rifles and screaming obscenities and death threats at unarmed demonstrators and reporters, I lived with my late first husband, Michael Rodriguez. Mike was a decorated veteran of Vietnam, married to me with two little kids, working a white-collar, full-time job as manager of a printing supply company branch, going to college at night, and the most non-violent and non-criminal person anyone could imagine. A fire station stood on the corner of the block where his company offices were, and several of the firefighters who were also Vietnam veterans had made friends with him since this was when no one in this country wanted to hear what these guys had gone through. This fact later saved his life. 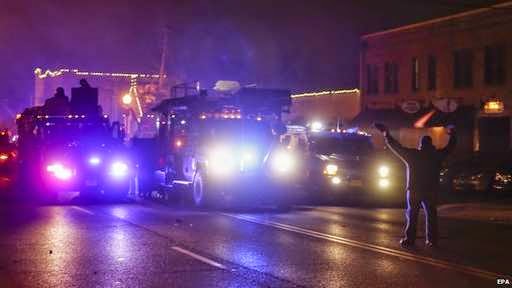 One evening in winter when twilight came early, Mike was the last one out of his office, as usual, since he locked up at night and opened up in the mornings. He found his car’s battery had died and called a cab to come take him home. While he stood outside his own offices, dressed in a business suit, waiting for his cab to arrive, two policemen pulled up, got out of their police cruiser, and started harassing him. They shoved him back and forth between them, called him racial slurs, searched him, and found nothing but his wallet, keys, and a tube of prescription ointment for psoriasis in his pockets. One then told the other, “We could shoot this motherfucker and say we thought that was a gun.” Kansas City police had just shot a fourteen-year-old African American boy three days before, claiming they thought the comb in his pocket was a gun—and they got away with it.

Mike thought he would die on that spot, leaving me a young widow with a baby and a toddler and no way for his kids or anyone to know that he had never done anything to deserve it. His firefighter friends had seen what was happening, however, and came out calling his name and asking what was going on and if he needed help. The cops told them to go away, but the firefighter veterans stood there watching until Mike’s cab came, and he got safely away. 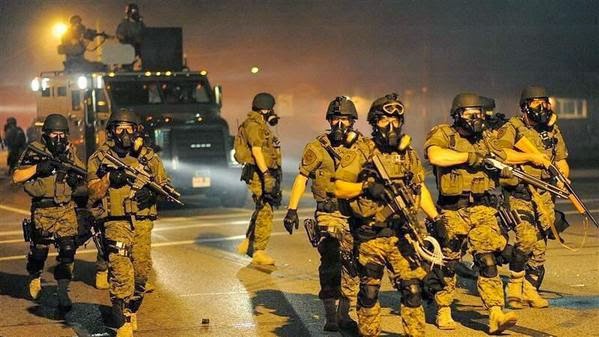 If you talk with people of color, you will hear story after story like this. A friend of mine who is a well-known white mystery writer married to an African American (extremely successful) artist just went out and bought all new dress business suits for her husband who, like most artists, normally wears jeans and T-shirts to work in, in the hopes that this will keep the New York City police from stopping and harassing him as he must travel through her city from home to his workplace and back. He must dress up for the commute, only to change into jeans and T-shirt at work, and then reverse the process to go home. White people don’t face this kind of treatment by law enforcement in their own lives, and it sounds so crazy and unreal to them that they assume people of color are exaggerating or making it up out of whole cloth, understandably, but this kind of harassment, threat, and fear is a part of daily life in communities of color all over this country.


Racism is a fixture of American life, but if allowed to flourish openly and unchecked, it won’t stop with communities of color. With the rising militarization of the police forces of large cities and small towns, I would caution my white friends to learn from our experiences. If this kind of behavior is allowed to continue and grow, it will eventually overflow into the white communities, beginning with poor and working-class communities and eventually moving up the socioeconomic ladder. It’s a matter of power and control, even beyond the matter of race and ethnicity.

Whether we know it or not, all of us in the United States have a vested interest in the Ferguson situation. Americans need to have a thorough, unbiased investigation of the Brown killing first, but then we need a reorganization of the Ferguson and St. Louis police forces and other similar departments, such as New York City, like the one Kansas City went through, and we also need a national discussion of the growing militarization of our police departments, large and small, and what we as citizens want to do about this growing threat.

Anonymous, thank you! I'm glad this helped you to see a different perspective. It's what I was hoping for. I think the actual bad racists are a small minority. I do think that most white people are sheltered by their own unseen privilege (for which they are not to blame since they didn't ask for it, but from which they have benefited) from seeing the realities people of color live with daily. My experience is that, when they learn what is really going on, many white people join in the fight against racism and for equality.
Posted by Linda Rodriguez at 10:38 AM