Allison Hedge Coke is a prolific and acclaimed Indigenous writer who’s been discussed before on this blog. http://lindarodriguezwrites.blogspot.com/2011/09/books-of-interest-by-writers-of_27.html

Her own books of poetry and memoir include the American Book Award winner, Dog Road Woman, popular memoir, Rock, Ghost, Willow, Deer, and two Wordcraft Writer of the Year winners, Off Season City Pipe and Blood Run. Hedge Coke is also known for her fine work in editing series and anthologies of Indigenous writers, most recently and notably SING: Indigenous Poetry of the Americas, which was the first anthology of Indigenous writing from all the Americas. 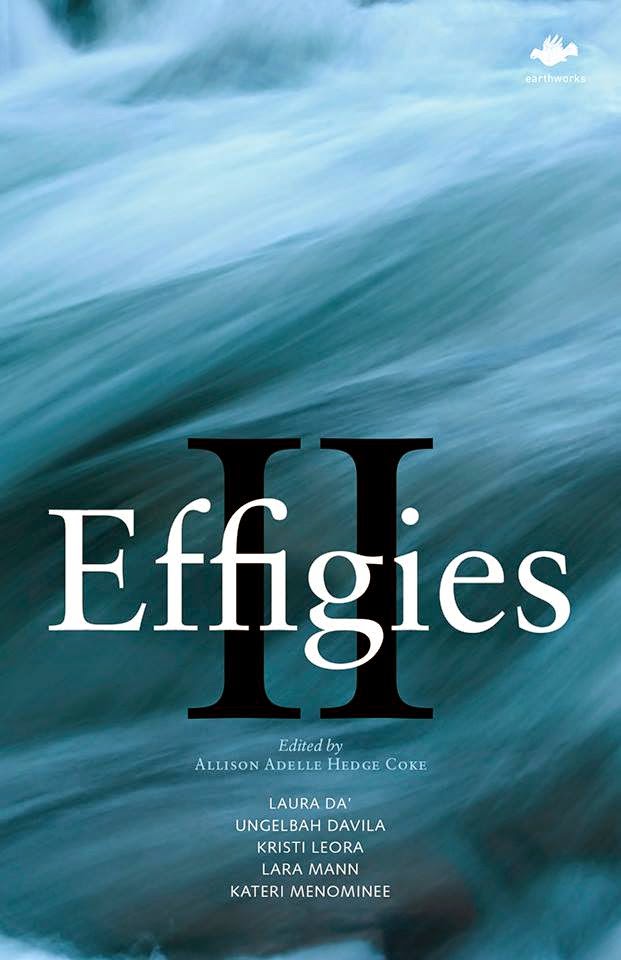 Ann Waldman says of this anthology, “Allison Hedge Coke has done it again, with her keen ear and eye: brought powerful new Native women's voices to our attention. Rigorous, powerful, brave, haunting, spirited.” LeAnne Howe also praises it. “These poems, fresh effigies carved by five young Native women cracked open my heart.  Read them when alone carefully swaddled in a warm blanket, or read them aloud at the kitchen table to all your relations, past and future.  But read them.”

The variety of poetic voices in this anthology is refreshing. These Native women’s voices are a powerful addition to the growing body of robust diversity that is modern, published Indigenous poetry (for the tribes have been voicing poetry for millennia). The poets of Effigies II bring their voices in the whispers, murmurs, fierce shouts, curses, blessings, lullabies, cries of passion, tears, and mourning. The breadth of life is to be found in these spirited offerings.

Although the poets in Effigies II are emerging poets coming into their own, the work in these pages is sure, deft, full of telling detail, rich in evocative imagery, and ringing with the music of language enriched by drawing on multiple heritages and cultures. These poems demand attention—Mann’s bittersweet tales of searching for roots for family and self; Davilah’s explorations of female sexuality, empowerment and exploitation; Menominee’s travels through ancient history and fairy tale with a postmodern sensibility; Leora’s work linking the modern world and its future with its beginnings through geologic process and creation stories; and the poems of Da’, which grieve for the atrocities, betrayals, and losses inflicted on her people.

Hedge Coke’s sure hand as editor can be seen in the ordering and juxtapositions which allow each poet’s work to feed and support that of the others. I highly recommend this collection to all with interest in new Indigenous voices and in a more nuanced approach to the idea of Indigenous writing, as well as to anyone who just loves to read lucid, lyrical, enchanting, and powerful poetry.

As usual, I suggest you order the book from the small press publisher, Salt Publications, which has a whole series of Indigenous books, Earthworks. Small press and university publishers bring most of the diversity in literature to the page. Without them, we would have a tiny handful of very famous writers of color published and no one else. If you value diverse literature, please support the presses that make it possible. http://saltpublishing.com/shop/proddetail.php?prod=9781844718955

As part of the whole #WeNeedDiverseBooks movement, I will devote a month of twice-weekly posts to my long-running Books of Interest by Writers of Color series while recuperating from some surgery mid-July to mid-August (because I'd already planned this and because I just think it's that important, so I'm going to do it anyway). During that month, I may have some extra posts by other writers and critics featuring yet more #diverselit. So stand by for some remarkable writers that you may never have heard of before.

Posted by Linda Rodriguez at 2:56 PM