I’ve neglected this blog for weeks because I’ve been on cross-country road trips promoting my newest novel, Every Broken Trust. With my trusty husband as companion, I’ve been to Illinois, Indiana, West Virginia, Pennsylvania, New Jersey, New York, Missouri, and Kansas in the past few weeks and am just finally getting caught up enough after all the traveling to be able to blog about it. (Not to mention the fact that I just stupidly overwrote a carefully written and edited long blog post, which will have to be replaced with a hastily written, probably never-as-good new post.) After the two parts of my travel posts, however, I hope to resume my normal blogging schedule and plan to have some more posts in both of my popular series, “Books of Interest by Writers of Color” and “Literary Mystery Novelists.”

When we rented the car in which we would set out on our journey, the rental agent asked us if we minded a car with Texas plates “Since many people do.” I’m not a fan of Texas’s governor or legislature, but I have too many wonderful Tejas friends to dismiss the entire state. So we took the very nice car, shaking our heads because it seemed impossible to get away from politics in anything anymore.

We packed a cooler of food and drinks in the car since we were trying to make the more than 1200-mile journey in time to attend a Friday evening reception for Brooklyn Book Festival Latino authors at La Casa Azul Bookstore in Manhattan. I knew we had to keep to the speed limit throughout the trip and keep our stops to the minimum in order to make it in time. So the long drive that could have been a vacation of sorts gained a lot more pressure and stress with that deadline facing us. 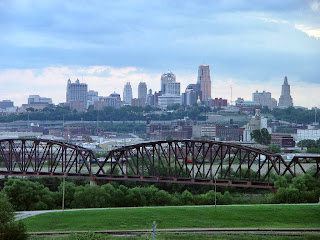 We motored from Kansas City at the western end of Missouri to St. Louis at the eastern with no problem. We knew the territory, and there was almost no road construction. Illinois had us worried because we had encountered hours of road-construction delay earlier in the summer when we went to Killer Nashville, but this trip went further north where it was not only more scenic but had little of the dread orange barrels and work-zone reduced speed limits. Indiana was even more scenic and had only slightly more construction zones, so by the time we stopped for the night in Terre Haute, we were right on schedule and feeling good, if tired.

Indiana grew more mountainous and beautiful as we approached Pennsylvania and the tiny corner of West Virginia we had to pass through before entering Pennsylvania, and roadwork became more common. We were climbing steeply into the Appalachians. The moment we crossed into Pennsylvania and hit the Pennsylvania Turnpike, though, traffic ground to a halt due to heavy road construction, steep winding mountain roads, the largest number of extra-wide tractor-trailer loads I’ve ever seen, and lots and lots of traffic. 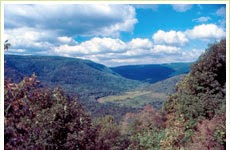 We were in the midst of the gorgeous Laurel Highlands of Pennsylvania, which thousands of tourists travel to see every year, and we had a great view as we drove along at ten to twenty miles an hour—and sometimes sat in one spot for ten minutes or more. I had planned for us to stop for the night in Allentown, Pennsylvania, out of the mountains and an easy morning’s drive through New Jersey and into New York City, but we had to stop at eight o’clock that evening when they began even heavier night construction on the roads. A nice pilot-truck driver told us not to even try to run through at night, and we lucked into the last hotel room in one of the few stops on the Turnpike, still well in the mountains and many miles from Allentown. The next morning we started early and hoped to make up lost time along the way, but that hope was wrecked by a tractor-trailer accident that could have been cleared quickly at home, but took over an hour in the mountains. And of course, the heavy road construction continued all the way through Pennsylvania. No one was ever so glad to see New Jersey as we finally were.

Consequently, we pulled up to our Brooklyn hotel at the time the reception was supposed to begin at La Casa Azul Bookstore. A quick calculation told me that, aside from our exhaustion and bedraggled appearances, if we grabbed the next subway into Manhattan, we’d still arrive after the reception was over. So I called to let them know that we couldn’t make it to the reception, after all. A bitter disappointment since many of friends I don’t get a chance to see often were going to attend. On the up side, though, Ben had driven us through Manhattan and Brooklyn at rush hour with no problems whatever. Quite an accomplishment! He joked that people saw the Texas license plate, thought he was packing an arsenal, and avoided him. We were pleasantly surprised by the amenities and quality of our inexpensive Brooklyn hotel, as well. We were so tired, though, that we just ate sandwiches out of our trusty cooler and went to bed.

Saturday, we rode the L train into Manhattan to meet my wonderful friend and agent, Ellen Geiger, for brunch in Greenwich Village. We had arranged to meet her at Union Square, which was a kaleidoscope of live musicians, tourists from countries all over the world, magicians and jugglers, dogwalkers (who knew there were so many big dogs in NYC?), shoppers, weekend strollers, and a huge greenmarket. Ellen took us to a Brazilian coffee shop with delicious food and a live band playing Brazilian music. We had a great time catching up on personal stuff and talking about books, writing, and publishing. After we finished, she took us on a tour of the really huge greenmarket, and at a Catskills merino sheep farm’s booth, I promised to teach her how to spin wool into yarn. We finally parted from dear Ellen and took the L line back into Brooklyn. On our way from the subway stop to the hotel, we stopped in a hole-in-the-wall restaurant, Atlantic Alabama Aaron’s Café, desperate for something to drink. Intrigued by their interesting Caribbean-Asian menu and soothed by the staff’s kindness, we ended up buying a wonderful supper and taking back incredibly delicious food for breakfast the next morning. 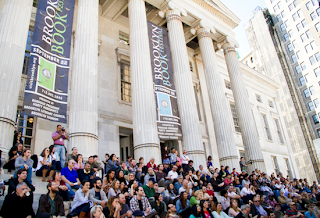 Sunday, I was on the earliest panel at the Brooklyn Book Festival and wanted to be sure to be on time. I wasn’t sure I’d make it safely to the festival from my hotel since my cab driver couldn’t find the address and ended up driving while wearing his reading glasses so he could decipher his cell phone’s GPS. But he managed to deliver Ben and me safe and sound to St. Francis College where my 10:00 a.m. panel was to take place. After a weeklong series of over 60 “Bookend” events from Sept. 16 – 22, the Brooklyn Book Festival on Sunday consisted of 90-plus panels, readings and workshops spread across 14 stages. Among the venues were Brooklyn Borough Hall and Plaza, Columbus Park, Brooklyn Law School, St. Francis College, the Brooklyn Historical Society, and St. Ann & the Holy Trinity Church.

I was to meet with other panel members and our moderator in the “green room,” but didn’t have a location for that, so Ben and I wandered lost through St. Francis College because the festival hadn’t started yet. In our wandering, we saw another woman, looking as lost as we did, and I told Ben I’d bet she was another writer looking for the green room. Sure enough, once we finally located the green room, that woman was the only person there. In a lovely surprise, she turned out to be novelist Caroline Leavitt, who I knew online and through her work, but had never met in person. We had a lively conversation as more festival staff, writers, and moderators filed into the room, and Caroline and Ben commiserated about the pangs of empty-nest syndrome. Soon enough, though, Caroline was led off to her panel at the Brooklyn Historical Society, and my panel and I were led into our seminar room past people lined up waiting to be allowed in to hear us.

On this panel called “Six Degrees of Separation,” Meredith Walters of the Brooklyn Public Library moderated Brooklyn poet laureate Tina Chang, historical novelist Ray Robertson, memoirist Leigh Newman, and me as we read from our work and then discussed the similarities and differences in process between the different genres of writing. The conversation ranged across the topics of voice, setting, and characters/personae. In spite of our differences, we found ourselves agreeing with and learning from each other as we examined the process of writing. Before we knew it, our time was up and we were hurried on to the book signing table while another panel of authors was led into the room and more literary fans lined up to get in to that session. 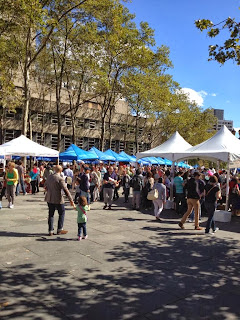 New York City's largest free literary event offered a long list of lectures, conversations and presentations at fourteen different locations. Sunday afternoon presentations included famous authors with Brooklyn connections, such as Edwidge Danticat, Pete Hamill, Colum McCann, Art Spiegelman and George Packer. More than 45,000 people attended the festival, and 200 stalls sprawled across three blocks in the heart of downtown Brooklyn, representing a cross-section of independent bookstores, independent presses and magazines. At times, the crowd was so packed it was difficult to move.

But Ben and I had a full day ahead with more readings out in the heart of the festival and ending with a trip out to Sleepy Hollow, New York, for a reading with dear friend Sergio Troncoso. More about all of that in Part II.

Posted by Linda Rodriguez at 5:06 PM