Allison Adelle Hedge Coke is an acclaimed poet of Huron, Metis, Cherokee, Creek, Portuguese, French-Canadian, Irish, Scot, and English heritage whom I have featured before on this blog, but she is almost as well-known for her activism. Just check out all the activist projects listed in her bio below and realize that the listing is not comprehensive. Hedge Coke is another of the many writers of color who give back to the community selflessly. She was named Mentor of the Year in 2001 by the Wordcraft Circle of Native Writers and Storytellers. Of particular interest is the work she did with the sandhill cranes at the University of Nebraska Kearney. A poet and activist also heavily involved with labor and the Indigenous mound structures that network across the continent, her work reverberates with dreams, myths, history, and a true sense of life lived into something more sacred than its sometimes brutal or desecrating events. 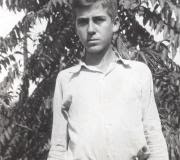 Hedge Coke is seeking funding for an ambitious project documenting through the life of her 91-year-old father the experiences of the many mixed-blood children who lived through the Dust Bowl and the Depression, usually in dire poverty and often working as migrant farmworkers.  Hedge Coke’s father as a child moved around the heart of the Dust Bowl in Oklahoma, Colorado, New Mexico, and Texas picking other people’s cotton for a penny a pound. As Hedge Coke says of this project, “Though we have hoped to do this project for years, my father recognized that he was in school with speakers interviewed in the recent Ken Burns documentary and was saddened that Burns’ work did not explore the collective experience and focused more in the Anglo experience, solely. Obviously timely and potentially time limited, I am setting out to document my father’s primary history of the Great Depression and the Dust Bowl, while he is still able to contribute effectively.”

“Red Dust: a mixed-blood Dust Bowl childhood” is designed as book project and documentary film using Hedge Coke’s father’s narration of his memories on location as the narrative thread running through a project that will also seek other surviving mixed-blood voices from that time to add their stories to enrich the chronicle. For more details of this unique project and the opportunity to contribute, visit the USArtists website here. http://www.usaprojects.org/project/red_dust_a_mixed_blood_dust_bowl_childhood

Hedge Coke conceived and edited the valuable anthology, SING: Poetry from the Indigenous Americas, the first-ever anthology of Indigenous American poetry from all the Americas, North, Central, and South. This was an incredibly complex work that took six years and multiple translators to create. Its usefulness for scholars and lovers of poetry is a testament to the energy of her vision and the quality of her accomplishment. It leads me to expect great things from this new project, which is an exciting foray into an area that has long been missing the stories, experiences, and voices of the mixed-blood people who lived through that crucial time period.

BIO
Allison Hedge Coke has been an invitational featured performer in international festivals in Medellin, Colombia, Venezuela, Argentina, Canada, and Jordan and foreign visiting professional in for Shandong University in Wei Hai, China. A 2010 Split This Rock Festival featured poet and 2011 Lannan Writing Resident (Marfa), she is a MacDowell Colony for Artists, Black Earth Institute Think Tank, Hawthornden Castle, Weymouth Center for the Arts and Humanities, and Center for Great Plains Research Fellow, is a former National Endowment for the Humanities Appointment Distinguished Visiting Professor at Hartwick College and formerly the Distinguished Paul W. Reynolds and Clarice Kingston Reynolds Endowed Chair in Poetry as an Associate Professor of Poetry and Writing at the University of Nebraska, Kearney where she directed the Reynolds Series and Sandhill Crane Migration Literary Retreat & Cranefest. She is core faculty in the University of Nebraska MFA Program and regular Visiting Faulty of the MFA Intensive Program at Naropa University. Hedge Coke is a regular keynote lecturer/performer and was the 2008 Paul Hanly Furfey Endowed Lecturer, in Boston. Her books include: Dog Road Woman, American Book Award, Coffee House Press, 1997; The Year of the Rat, chapbook, Grimes Press, 2000; Rock Ghost, Willow, Deer, AIROS Book-of-the-Month (memoir), University of Nebraska Press, 2004; Off-Season City Pipe, Wordcraft Writer of the Year for Poetry, Coffee House Press, 2005; Blood Run, Wordcraft Writer of the Year for Poetry, Salt Publications, UK 2006-US 2007; To Topos Ahani: Indigenous American Poetry, Journal Issue of the Year Award (ed.), Oregon State University, 2007; Effigies, (ed.), Salt Publications, 2009 and Sing, University of Arizona Press, 2011. She has edited five other volumes. Her long poem "The Year of the Rat" is currently being made into a ballet through collaboration with Brent Michael Davids, composer. Recent literary publications include Kenyon Review, Florida Review, Connecticut Review, Sentence Magazine, Prometeo Memories, Akashic Books, and Black Renaissance Noire. Recent photography publications include Connecticut Review, Future Earth Magazine and Digital Poetics. She has also authored a full-length play Icicles, numerous monologues, and has worked in theater, television, and film. Hedge Coke has been awarded several state and regional artistic and literary grants, fellowships, and tours; multiple excellence in teaching awards, including the King Chavez Parks Award; a Sioux Falls Mayor's Award for Literary Excellence; a National Mentor of the Year, a Wordcraft Circle of Native Writers and Storytellers Award; has served on several state, community, and national boards in the arts, a housing board, as a Delegate, in the United Nations Women in Peacemaking Conference, Joan B. Kroc Center for Peace and Justice, University of San Diego, and as a United Nations Presenting Speaker (with James Thomas Stevens, Mohawk Poet), Facilitator, and Speaker Nominator for the only Indigenous Literature Panel of the Indigenous Peoples Human Rights Forum. For many years she has worked with incarcerated and underserved Indigenous youth and youth of color mentorship programs and served as a court official in Indian youth advocacy and CASA. Hedge Coke has edited five additional collections and is editing two new book series of emerging Indigenous writing. Hedge Coke has continually taught various creative writing, literature, environmental writing, cultural philosophy, Native American Studies/Literature, education, and other courses for pre-school, K-12, college, university, and professional institutions since 1979. She came of age working fields, waters, and working in factories.

Posted by Linda Rodriguez at 10:59 PM