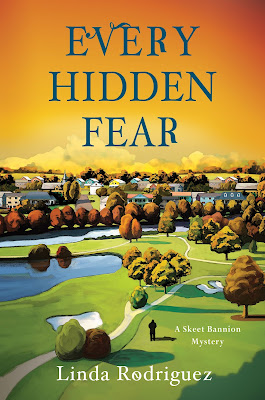 At the end of last week, I turned in the manuscript for my third Skeet Bannion mystery novel, Every Hidden Fear, which will be published May 6, 2014. My mind is still awhirl with the characters and events of that book. Yesterday, I received the cover for Every Hidden Fear, and I’m delighted with it, as I have been with each of the covers my publisher has given me for this series. So I wanted to share it with you.

Every Hidden Fear takes place in autumn just a few months after the events of the previous book, Every Broken Trust. Skeet Bannion tries to adjust to having her tough old grandmother living with her and her son, Brian, while Brian goes through the first pangs of unrequited love for his best friend, Angie Melvin, and Skeet’s aging delinquent father has also fallen disastrously in love.

Meanwhile, Ash Mowbray, a bad boy from the wrong side of the tracks, comes back to Brewster as a wealthy developer to polarize the town where he was once scorned, pushing plans to build a shopping mall on the outskirts of town that will destroy the courthouse-square businesses of Brewster.  The town council’s split on his proposal, and feelings run high.

Mowbray makes things worse by threatening to reveal dirty secrets about prominent citizens and announcing he’s the real father of Angie’s quarterback boyfriend. It’s not long before Mowbray turns up murdered with his son as prime suspect. Angie and Brian turn to Skeet to find the murderer and save their friend.

From Brian’s classmate and his family to Skeet’s friends among the shop owners of the town square, too many people wanted Mowbray dead, and too many of them are people Skeet cares about. She must catch the murderer to spare her friends, even if the killer’s one of them.

In this book, the plots and subplots are driven by people’s hidden fears, hidden from others and often from themselves, and these hidden fears often lead them to take ruinous actions. Skeet’s own hidden fear is activated and intensified by the disasters of others in the story, leading her to impulsive acts that will continue to affect her life for some time to come.

My beta readers and I think this is the most emotional and personal Skeet Bannion book, so far. Fear of love and fear of loss lead Skeet to places and actions she’s sworn she’d never go or do. I’m still excited about it, and I hope you will be, too, when it’s published and you have the chance to read it.

As soon as my publisher gives the okay, I’ll post a sample chapter or two. Stay tuned!
Posted by Linda Rodriguez at 6:00 AM