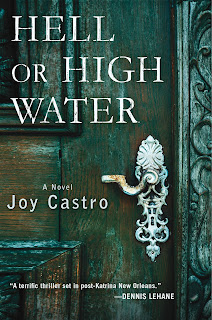 Joy Castro's new novel, Come Hell or High Water, qualifies her for both the Literary Mystery Novelists series and the Books of Interest by Writers of Color series on this blog. Castro's first book, The Truth Book: A Memoir, was lauded for its "achingly beautiful voice" by Robert Olen Butler and received critical acclaim. It is now used as a text in a number of memoir-writing classes around the country.


Hell or High Water is a thriller set in post-Katrina New Orleans. Hundreds of registered sex offenders who went off the grid during the Hurricane Katrina evacuation have never been found.

The sex-offender story is assigned to Nola Céspedes, an ambitious young reporter at the Times-Picayune, who tries to balance her investigation with taking care of her aging mother, seeing her girlfriends, mentoring a teenager, and meeting a mysterious stranger named Bento.

As her research progresses, Nola is gradually drawn in to an underworld of violent predators--a world she struggles to keep separate from her middle-class professional life.  Raised in poverty by a single mother in New Orleans' notorious Desire Projects, Nola has her own secrets to hide.

Here's the link to purchase Hell or High Water. 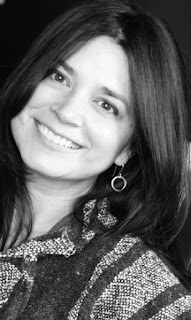 Joy Castro was born in Miami in 1967 and adopted four days later by a Cuban-American family of Jehovah’s Witnesses. She grew up believing in what Witnesses call “the Truth” and going door to door, but she ran away at fourteen when the home became abusive, finally leaving the religion at fifteen. On her own from the age of sixteen, she raised her son, born when she was a college junior, while finishing school and earning her graduate degrees. Raised to believe herself Latina, she found her birthmother at twenty-six and discovered that her actual ethnic background was quite different.

Castro’s first book, The Truth Book: A Memoir (2005), was named a Book Sense Notable Book by the American Booksellers Association, and was adaped and excerpted in the New York Times Magazine. In The Truth Book, Castro writes about religion, violence, adoption, ethnic identity, and her father’s suicide, as well as the warmth, beauty, humor, and passion for reading that sustained her.

Set in post-Katrina New Orleans, her debut novel, Hell or High Water, will be released by St. Martin's/Thomas Dunne in July. Her second memoir, Island of Bones, a collection of creative nonfiction and personal essays, is scheduled for publication in September by the University of Nebraska Press, along with a new paperback edition of The Truth Book with an introduction by Dorothy Allison.

In 2007, she joined the faculty at the University of Nebraska-Lincoln, where she is currently an associate professor with a joint appointment in English and Ethnic Studies and serves as the associate director of the Institute of Ethnic Studies.

How would you describe Hell or High Water for the readers? What was your inspiration for this book?

Thank you, Linda!  Hell or High Water is a literary thriller set in New Orleans in 2008, three years after Katrina.  Nola Céspedes, an ambitious young reporter at the Times-Picayune, is assigned a story on the hundreds of sex offenders who went off the grid during the hurricane evacuation and were never relocated.  At the same time, a young female tourist is abducted from the French Quarter, and Nola thinks the disappearance might be linked to her story.  Her investigations take her into gritty territory.

My inspiration for the book was the beautiful city of New Orleans:  its resilience, its courage, its complicated history.  I tried to create a protagonist as tough, sexy, and gutsy as the city is.  Hell or High Water is my love letter to New Orleans. Hell or High Water will come out in Germany from Deutscher Taschenbuch Verlag and in France from Gallimard, as part of their Série Noire.  I think it's cool that it's going abroad.

When I’m writing the first draft, I write longhand in bed in the morning before I get up, before I talk to anyone or start thinking about my job.  My brain is still full of dreams and music, and that’s the mental space I write from.

I write a chapter every day, rain or shine, even if it’s awful (and I work from an outline that I’ve hammered out in advance).

Once I’ve got a complete draft of the book, I type it up, which gives me a first opportunity to revise.  (I work at a stand-up desk.)

Then I just keep revising and reworking until I’ve got something that’s ready to share.  I don’t keep track of how many drafts I do during this stage; it would be too demoralizing.  I focus on the work and not the counting.

After I get feedback from a few trusted readers and make any helpful changes they suggest, I revise again.

Finally, my last revision is a read-aloud marathon session, listening for sound, rhythm, and unintended repetition.  I really care about the music of the lines.

Shortly after Hell or High Water debuts, the University of Nebraska Press will publish your second memoir, Island of Bones. What projects, literary or otherwise, are you planning next?

I’ve just finished the manuscript of the sequel to Hell or High Water, which also stars Nola Céspedes and is set in New Orleans.  It will be out in 2013.  We’re still playing with titles; I want BAD SHOOT, but my editor prefers NEARER HOME, which I suggested and do like; it’s an allusion to the Robert Frost poem “Desert Places.”  We’ll see.

I’m editing an essay collection called Family Trouble:  Memoirists on the Hazards and Rewards of Revealing Family, which is a really interesting project with essays by 25 different published memoirists.  Publishing true stories about your family is a tricky thing, and these writers address the choices they made and the fallout they faced.

After that, who knows?  I have a collection of short stories, HOW WINTER BEGAN, that would like to see the light of print, and there’s scholarly project about modernist writer Margery Latimer that’s been on the back burner for a while, so I might start that up again—or maybe there’s another Nola Céspedes novel in my future!

When I was growing up, I loved mysteries of all kinds.  I was addicted to Sherlock Holmes.  I also loved the children’s novels of Frances Hodgson Burnett, especially A Little Princess.  I love the way kindness triumphs in her work.  I was also one of those girls-who-love-horses, so I read everything by Walter Farley and Marguerite Henry.

My literary influences generally are Jean Rhys and Katherine Mansfield, two modernist writers I love, and Milan Kundera.  In terms of thrillers specifically, I’m most influenced by Dashiell Hammett, Dennis Lehane, and Kate Atkinson.  I love hard-boiled voices, and the complexity and layers of Atkinson’s work blow me away.

Your first book was a critically acclaimed memoir, The Truth Book. What inspired you to write a novel? And why a thriller?

Well, one has only so much life to write about.

Mysteries and detective fiction have always appealed to me, and I thought, What if?  So I tried it.  It was a lot of fun.

I also think that mysteries are the genre of social justice.  Social justice is something I’m passionate about—as is my protagonist.  That passion gets both of us into trouble.  She’s more mouthy than I am, though.  And she carries a gun.

Do you belong to a critique group of other authors? Do you find it helpful? In what ways?

No.  I was a part of a critique group for a while, and I loved it, but we were working at different paces on different kinds of projects.  After a while, it sort of gently, organically fell apart.

I do share my manuscript with my agent, Mitchell Waters at Curtis Brown, who’s got a terrific ear and is ruthless, and with my husband, who’s a wonderfully literary reader and also infuriatingly logical, which is very helpful with plot.  And then, of course, I’ve had really wonderful editors at St. Martin’s, Karyn Marcus and Margaret Sutherland Brown, who’ve helped my novels immensely at both the global and line-editing levels.  So I guess they’re all sort of my critique group.

I have a scholarly Ph.D. in literature, so I’ve had some literary training, which helps.  Teaching creative writing at the graduate level helps to keep my critical skills sharp.

Essential.  Read voraciously.  If you’re a young writer, I’d recommend that you read what you desire to read.  You should let your own curiosity and tastes drive you.  You’re developing your own voice and vision, so you should be led by what moves you.  No matter how brilliant someone tells you a book is, if you’re bored, put it down.  There’s no prescribed curriculum.  I didn’t read Anna Karenina until I was in my forties, and the world did not end.  Follow your passion.

The most surprising thing I’ve learned is that I can do it!  I’ve wanted to be a writer since I was a small child.  I’ve always written stories.  Having them published and critically well received is a lifelong dream come true.

The hardest part has been trying to nurture a writing life while working full-time as a professor and raising a family.  I always feel torn.  But now that our son is finished with college and our foster daughter is about to go to college, I’m looking forward to more peace and space.

I love my job teaching at the university.  Still, if something made it financially possible for me to quit, I’d quit tomorrow.  It’s hard to wear too many hats.  The kind of intelligence you need to navigate an academic community is not quite, shall we say, the same kind that you need to dream up an imagined world and dwell in that world for long periods of time.

The upshot, though, is that it can be done.  If I can do it, anyone can do it.

Posted by Linda Rodriguez at 9:02 AM