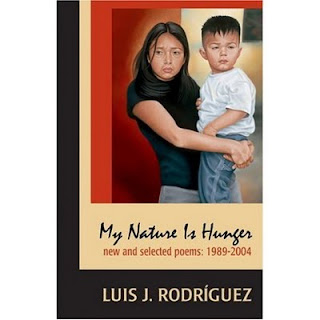 Luis J. Rodriguez My Nature is Hunger: New and Selected Poems, 1989 – 2004 (Curbstone Press) Music of the Mill: A Novel (Rayo Books) Rodriguez is one of the major Chicano activists and writers writing in the last fourth of the 20th century and today. He is perhaps most famous for his best-selling, critically acclaimed memoir, Always Running: La Vida Loca, Gang Days in LA, which is still the book most frequently stolen from libraries—and on the shortlist of books most frequently banned in the U.S. However, he has won awards and acclaim for his poetry, his fiction, his memoir, and his children’s books, not to mention awards for his humanitarian efforts and community building, including inclusion as one of 50 leaders worldwide selected as “Unsung Heroes of Compassion,” presented by the Dalai Lama. He has been centrally involved in founding important cultural institutions, such as the Guild Complex in Chicago, and important grassroots community organizations that work with gang and non-gang youth. He is the founder of literary press, Tia Chucha Press, and Tia Chucha Bookstore and Centro Cultural, a bookstore, performance space, and cultural workshop center in East LA. To give a true listing of the scope of his accomplishments and work to empower others would take up more space than I have to devote to it in this entry. I encourage you to visit his website and learn more about this essential cultural figure. 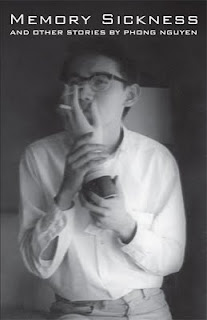 Phong Nguyen Memory Sickness and Other Stories (Elixir Press) Nguyen’s first collection of stories won the 2010 Elixir Press Fiction Award. With a Vietnamese father and an American mother, he often writes about people who are trying to find their place in the world. Nguyen’s fiction is sharp and detailed and often devastating in its quiet, understated power. He is assistant professor at the University of Central Missouri where he also edits the literary journal, Pleiades. Nguyen is a young writer to watch as his career takes off.

Here is the link for Nguyen’s book. As usual, I encourage you to patronize these small presses without whom hardly any writers of color would be published. 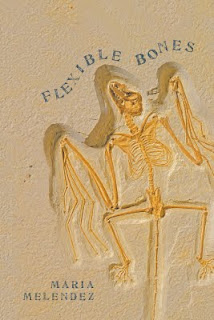 Maria Melendez Flexible Bones (University of Arizona Press) Melendez’s academic background in biology informs her poetry with a richness of variation and a playfulness involved with the physical world around her. Her poetry is deeply involved with environmental issues, in particular her “extinction elegies,” which mourn and memorialize species and places forever gone. Her book, How Long She’ll Last in This World (University of Arizona Press), won Honorable Mention in the International Latino Book Awards and was a finalist for PEN Center USA Literary Awards. Melendez has many years of experience in community outreach and education and has moderated an influential Latino/a Poets Roundtable at the Poetry Society of America’s website. She is the editor/publisher of Pilgrimage magazine and acquisitions editor for Momotombo Press at the University of Notre Dame. Melendez has a breathtaking talent and will continue to build a remarkable body of work.

Here is the link for Melendez’s book. The University of Arizona is one of the university presses that have done the best jobs of supporting and publishing writers of color. While you're there, check out their lines of Latino and Indigenous literature.

I will be adding a new series to run concurrently with this one on the blog--Literary Mystery Novelists. My hope is to bring together literary folks and mystery fans for the education and enjoyment of both groups.

Posted by Linda Rodriguez at 11:38 PM