Poems for Dias de los Muertos (Days of the Dead) 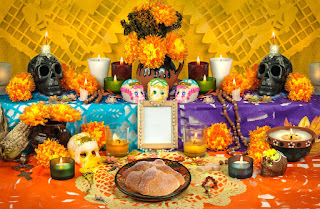 Today is the first day of  Dias de los Muertos (Days of the Dead) in Mexico and among Mexican Americans. Contrary to what most Americans seem to think of it, Dias de los Muertos is not a zany, drunken extension of Halloween. It's more of a family party to honor the spirits of deceased loved ones. In Mexico, many families visit the cemeteries where their loved ones are interred to decorate the graves for a party and eat and drink with their dead, who have plates prepared for them, as well. It has more in common with the older American customs around Memorial Day than Halloween.

Much like Samhain, the Celtic feast day that lies forgotten at the roots of America's Halloween, Dias de los Muertos are two days when the veils between the worlds of the living and the dead thin to the point of allowing communion with dead loved ones. Calacas and catrionas, the skeleton figures that are dressed up and posed, often in zany situations called calaveras, are a way of paying respect to Death without fearing or giving Death undue power over the living.

In this time of marigolds and mariposas,
calacas, calaveras, and candles everywhere,
in this time when the veil between the worlds,
living and dead, is stretched thinnest,
watch the souls streaming through the tears,
trailing that unnatural chill of Lord Death’s land.

Here he comes himself, skeleton jester,
with crown and scepter to beg
for the taste of mescal y pan muerto.
Dress him up for photos,
Lord Death just bares his teeth
in an everlasting grin and dances,
loose-limbed and clacking, bone on bone,
holding out his sombrero at the end
as he mimics a hacendado’s formal bow.

Who knew he was such a comedian?
All our legends tell a different story,
scary and grim, not this grinning,
fingerbone-snapping prankster.
Who knew he could be so funny,
prancing around in silly costumes,
telling knock, knock jokes,
juggling sugar skulls,
striking ridiculous poses?

Be generous to that hat he passes
when his performance is finished.
No small change or paper bills.
This bony clown performs for one pay only,
a taste of what we take for granted
every day, a mouthful of mole,
a kiss, a look at the sunlight,
a breath of air like sweet wine,
one heartbeat rubbing up against another.

Once a year,
he comes to remind us
that life is a slapstick farce,
and his skeletal leer
is the ultimate punchline.


This second poem arose from a challenge given to me by a fellow member of The Latino Writers Collective--to write a passionate love poem for Dias de los Muertos.

This is the altar I’m building
to my calaverada,
that madcap dance of death
my heart tangoed with you.
Boxes stacked and covered with fabric
to make a place of power
to draw you back to me.
A calavera of great artistry
will stand in for you, mimicking life
almost as well as you mimicked love.
I will bake you pan de muerto and rosquete,
still trying to please you,
buy finest bourbon, your favorite,
no mezcal or tequila for you,
place it next to the water, salt, and bread.
Mustn’t forget the mirror and comb
so you can check your hair
of which you were always so vain.
I will slice my fingers cutting
papel picado skulls and hearts,
yellow, orange, pink and white,
and purple for pain,
to decorate the velvet of the altar.

I adorn the ofrenda and myself
with bright, guilt-swallowing marigolds,
chaining them through my hair,
string their petals across the ground
to lead you back. Let me light the copal
and inhale the sweet smoke,
trying to attract you even now,
drawing you to me. Mustn’t cry, though.
“The path back to the living world
must not be made slippery by tears.”
It will all be to no avail.
I can’t fool you or anyone
into thinking I have finally found acceptance.
It’s all too clear I would wrestle
the Lady of the Dead herself
for possession, to wrench you
from peaceful rest in Mictlan
and back into the tempest
that was us.

Published in Present Magazine
Posted by Linda Rodriguez at 10:48 AM