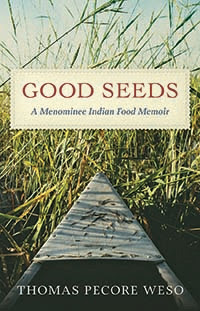 (Since Ben Furnish is writing a food memoir called Restaurant Therapy himself, he seemed the best reviewer for this new award-winning (National Winner of The Gourmand Award and IBPA Benjamin Franklin Awards Silver Medal Winner) book, which memorializes an entire Indigenous way of life through the gathering, preparing, and eating of food.

As always, I encourage readers to support the small and university presses that publish these books, without which we would have few books by writers of color, at all. Order Good Seeds below.)

Good Seeds: A Menominee Indian Food Memoir by Thomas Pecore Weso (Wisconsin Historical Society Press) is one of those rare books that really does stretch and dissolve boundaries of genre that too often separate literary from culinary and historical writing.

Weso focuses especially on what he remembers about cooking and eating with his traditional grandparents as he grew up in 20th century northern Wisconsin. As deceptively simple a detail as the uneasy status of oatmeal on his grandmother’s breakfast table, which Weso recounts early in the book, becomes a key in understanding the religious identity and educational background of his grandparents and mother.

Weso’s grandmother, Jennie, encountered oatmeal—and other such fare as pancakes—having attended Catholic schools that served Menominee areas in Wisconsin. In fact Menominee at that time had to choose between the Catholics and the Lutherans for schooling. If they wanted a secular-sponsored rather than religious education, their only choice was to do like Weso’s medicine-man grandfather, Moon, and attend the federal Haskell Institute in Kansas, where “they didn’t care what your religion was, as long as you were there for head count at morning muster.”

A generation later when Weso’s mother attended Haskell, however, she learned to eat oatmeal there. So Weso remembers oatmeal occasionally served in deference to his mother, but it remained something of an interloper on his grandfather’s menu. But even so, for the Menominee, oatmeal became a savory rather than a sweet dish, and Weso gives the recipe for Menominee-style oatmeal seasoned with pepper.

Although each chapter ends with relevant recipes for its storyline, the chapters’ narratives form the real heart of the book. Each story offers an intrinsically interesting story about his grandparents’ lives, but Weso goes on to place their experiences in the broader spectrum of Menominee experience of the time, and of Wisconsin and American experience more broadly.

"This is one of the most important differences between Native and European traditions," says Weso. "Wild rice grows and is used; it is not a profitable crop. ... Before a culture can take root, the storytellers need to be fed. ... Wild rice made the Menominee life possible."

Among the later chapter subjects are Wisconsin diners and the Menominee tradition of an Indian county fair—which today lives on as a Menominee powwow. While Weso’s guidance in preparing squirrel or beaver will likely remain for me an exercise of the imagination rather than a practical matter of instruction, that fact only rendered it more compelling on the page. Weso also captures something of the feel of this close rural community of Native Americans near the Canadian border—and of colonialism's uninvited cook at work in the family kitchens of of 20th century Native Americans.

With the literary economy to rival poetry, these recipes and commentary document a particularly vivid and essential aspect of daily life and cultural expression in a changing ethnic community.

Ben Furnish works as an editor/publisher and teacher in Kansas City, is the author of Nostalgia in Jewish American Theater and Film: 1979-2004 (Peter Lang), and is currently writing the food memoir, Restaurant Therapy.
Posted by Linda Rodriguez at 12:52 PM