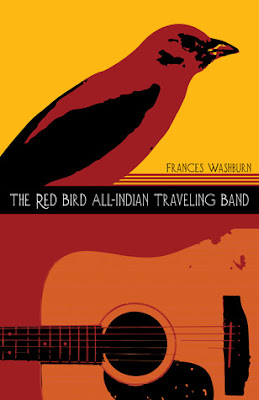 The engaging protagonist of Frances Washburn’s novel, The Red Bird All-Indian Traveling Band, Sissy Roberts, a self-aware and sassy young Lakota waitress, lead guitarist, and singer for the eponymous band, is beautiful and smart. Sissy is also gifted (or cursed) to have people confide all their secrets to her, whether they want to or not and whether she wants to hear them or not. Sissy graduated from high school four years earlier and wants to find a way to leave the reservation to go to college and avoid the common fate of her pregnant and unmarried friend, Speedy, who lives with Sissy and her family.

Part tightly paced mystery, part humorous, affectionate community chronicle, Washburn’s third novel takes place on the Pine Ridge and Rosebud Reservations in South Dakota and begins on Fourth of July 1969 when a hail of beer bottles chases Sissy and the guys in the band out of the Longhorn Bar in Scenic where they are scheduled to play. That same night, Buffalo Ames is murdered outside the Longhorn, drawing Tom Holm, an FBI agent, toward Sissy with her talent for hearing secrets as his unwilling entrée into the close-knit and suspicious reservation community.  The book ends four months later after much romantic and other intrigue and after many of Sissy’s friends and loved ones have become suspects in the murder at one time or another before she solves the crime.

Rich in particulars of reservation life and unforgettable characters, Washburn creates a believable, well-drawn world in which she sets her emotionally complex story of the coming of age of a young woman with the gift of being a receptive listener who pays real attention to what people tell her and the truths behind what they say and the story of a downtrodden, complicated community in a pivotal time, forming and reforming itself. Washburn’s pared-down style is ironic and taut and, even when venturing into tragedy or love, never touches on sentimentality. This richly textured novel of a strong young woman’s and her community’s development and self-determination is a fine literary work with interlocked stories and telling details that bring Sissy and her world to life on the page. 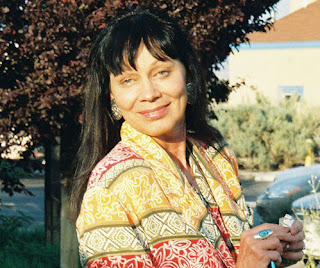 Bio
Frances Washburn was born on Pine Ridge Reservation in South Dakota and grew up there. She earned her Ph.D. from the University of New Mexico and was a visiting professor at the University of Nebraska before being hired at the University of Arizona where she is an Associate Professor in the American Indian Studies Program and the Department of English. She is the mother of two children, Lee and Stella.
Washburn is the author of the novels, Elsie's Business and The Sacred White Turkey, in addition to The Red Bird All-Indian Traveling Band. She has also published a biography of Louise Erdrich, Tracks on a Page: Louise Erdrich, Her Life and Works, as well as scholarly and academic articles and essays.

Posted by Linda Rodriguez at 4:14 PM