A Poem for Banned Books Week 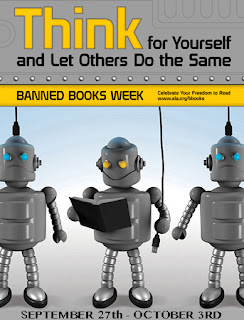 It's that time again, time to celebrate banned books and to defy those elements of our society who always try over and over to censor books in an effort to control what the rest of us can read or think about.

I have seen repeated attempts to censor the books of writers I admire, writers who have been role models to me, and in some recent cases, writers who are my friends. I keep hoping that, as I grow older, this week will have shorter and shorter lists of banned books. Unfortunately, the lists still grow longer each year.

Here is a poem I wrote years ago about this whole situation of censorship--and unfortunately it's still as relevant today as it was when I first wrote it for Banned Books Week years ago.


SPELL FOR BANNING A BOOK

First, find a censor.
This will be hard—
not that censors are rare,
but they are adept mimics.
Do not be fooled. No matter
how benevolent its disguise,
a frightened censor is dangerous.
Approach with caution.
To safely capture it
for your spell, you must circle
the censor chanting soothing
nonsense syllables.
It is meaning that terrifies
censors.

Surround the stupefied censor
with charms made from advertising
photographs of a mythical golden age—
smiling mothers
in high heels and aprons, silent fathers
keeping sentinel on horseback, sexless
children never asking
questions. Sacred to the censor,
such charms have power
to blind it. 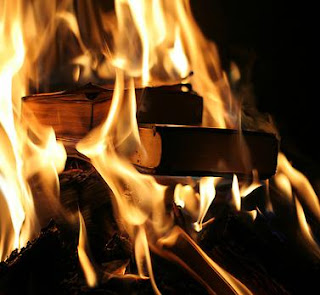 Select the book
you want banned.
Set it outside the circle
of charms, and carefully
remove the charm nearest
so the censor can detect
the presence of an attempt
at meaning.

Protect yourself.
Enraged censors have been known
not only to ban books
but to burn them
and then press on to people.
Posted by Linda Rodriguez at 8:42 PM