For Dad on Father’s Day


My birth father was a violent, unpredictable man. After he and my mother finally divorced, the last thing any of us kids wanted was another man around. So when Mother remarried, we weren’t the most welcoming to our stepfather. But he won us over with his quiet steady caring, his reliable responsibility, and his willingness to take on all five of us, to become Little League coach and Scout leader. Eventually we were calling him “Dad.” 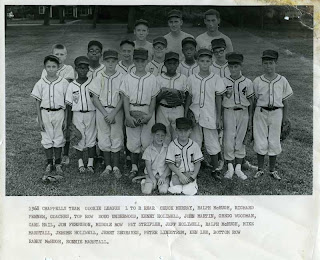 Mother died first. Years later, when Dad was facing a protracted end due to cancer and had to be in a nursing home in a town where none of us kids lived any longer, my sister and I divided the week between us to go stay in that town and spend each day with him, our brothers pitching in when they could. When Dad’s end was near, my sister called, and I packed my kids in the car and drove like a drag racer to make it to that town in time. We all did. Dad died in my arms and my sister’s while the boys all stood around him as close as they could get. Afterward, one of the nursing-home aides said to me, “Surely, that man was loved!”

This poem is for Dad on Father's Day.


You and Dad were entirely happy here—


you in purple miniskirt, white vest and tights


(you always wore what was already too young


for me), Dad in purple striped pants,


made for a bigger man’s head.


You both held Wildcat flags and megaphones


to cheer the football team who,


middle-aged townies, arranging for their penicillin


and pregnancy tests and selling them


cameras and stereos at deep discount.


But you were happy


in this picture, before they found


After the verdict, he took you to Disneyland,


this man who married you and your five children


when I was fifteen. He took you cross-country


to visit your family, unseen


since your messy divorce.


He took you to St. Louis


and Six Flags Over Texas and to Topeka


I don’t think he ever believed


you could die. Now he’s going


the same way. And none of us


live in that Wildcat town with the man


who earned his “Dad” the hard way


from suspicious kids and nursed


your last days. For me, this new dying


brings back yours, leaving me only this image


of you both cheering for lucky winners.


Posted by Linda Rodriguez at 5:59 AM