Every Broken Trust, the next Skeet Bannion novel 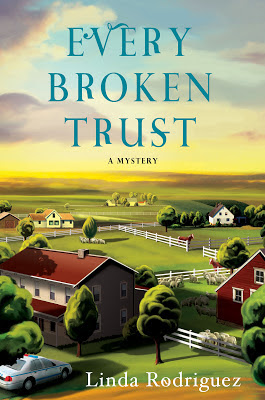 The next Skeet Bannion novel, Every Broken Trust, is available for pre-order now and will launch May 7, 2013.
Pre-order here.

I'm excited about this latest in Skeet's adventures and about the gorgeous cover my publisher has given me again. And I'm absolutely thrilled about the blurbs Every Broken Trust has received from two super writers for whom I have so much admiration!

“Linda Rodriguez is a richly talented writer. Her aim is true, and she strikes deep. This new work will reward you as it weaves its generous spell. Good stuff. Get it now.”— Luis Alberto Urrea, bestselling author of The Hummingbird’s Daughter and Queen of America

Am I a truly fortunate writer, or what?

A party to celebrate the arrival in Brewster, Missouri, of George Melvin, a Kansas City politician accompanied by his troubled teenage daughter, wealthy wife, even wealthier backer, and mysterious employee, rapidly turns into disaster when Skeet’s best friend, Karen Wise, stumbles on a body in Chouteau University’s storage caves and is attacked herself. Skeet works to ensure Karen safety, even as Karen becomes obsessed with the dead man’s drunken claim that her husband’s accidental death years earlier was murder.

Brian’s emotional entanglement with the rebellious daughter and Karen’s fixation on the politician as her husband’s murderer frustrate Skeet’s efforts to keep them both safe and out of trouble while she tracks down the killer, who’s targeting Karen to remove a potential witness. Even Skeet’s friends and neighbors in Brewster keep secrets from her, and Skeet wonders if any of them are what they seem.

I've been very tough on Skeet in this book. As I’ve said before, I really envision the series of “Every” books as one giant meta-novel about Skeet’s growth and development (and, occasionally, failures) as she works through the issues surrounding her personal development book by book. Each mystery story, complete in itself, will be one more chapter in the story of Skeet as she becomes the really remarkable person her grandmother has always known she would be.

Skeet has built a new family to take the place of the mother and father who had (in her eyes) failed her. I wanted to put her in a situation where Karen and four-years-dead Jake, who had been her parental surrogates, as well as Brian, her new son, and Joe, whom she considered a possible mate, would all betray her trust in some way or another. I wanted to see how she would cope with these various large and small betrayals that would also threaten her with the actual loss of Brian and Karen.

I hope to get permission soon to post the first chapter or some other excerpt from the book here for you to read and get a taste of it.We're into the countdown now until Every Broken Trust is released into the world. So a little celebration's in order here. Chocolate for everyone!

Posted by Linda Rodriguez at 12:47 PM