Janet McAdams’ suspenseful debut novel is a lyrical portrayal of a woman’s search for herself in the guise of her search for long-missing parents, who had fled imminent arrest for their involvement in a 1970s nonviolent Native American protest action that went wrong. Her protagonist, Neva, has lived in the South all her life, passing as white in fear of what might happen to her if those around her realize she’s part-Creek. Even her controlling, abusive husband never knew until the one person in whom she confided told him.

As her desperation to be free of this narcissistic husband and her loss of self grows, Neva discovers a clue to the possible whereabouts of her parents and flees her life in Atlanta to seek them in the tiny, war-torn country of Coatepeque in Central America. She finds work teaching the children of the wealthy elite, love with a sensitive man of shadowy  connections, and friends for whom she can care and make a commitment. As the chaotic war around her escalates, Neva faces danger and heartbreak on all sides. Surrounded by violence and havoc, she begins to remake herself as a whole person.

Within Neva’s perspective, we move back and forth in time and space from her memories of her parents’ increasing commitment to activism as they learn of the heartrending forced sterilization of Native women in the United States to the constantly escalating battle the wealthy elite wage against the surrounding Indigenous populace in Coatepeque to memories of her husband’s selfishness and cruel domination, the personal version of these other large-scale attacks on Indigenous peoples. Her eloquent prose guides us through these transitions, and her beautifully rendered characters and places lure us on in this journey from grief and longing to the potential of a new life.

One of our most compelling and imaginative poets, McAdams weaves a spell of loss, forgiveness, and redemption that will grip the reader’s mind long after the last page is read. 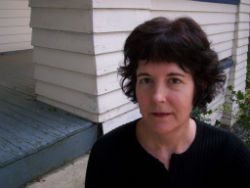 Janet McAdams Bio
Janet McAdams is the author of two collections of poetry, Feral (Salt 2007) and The Island of Lost Luggage (Arizona, 2000), which won the Diane Decorah First Book Award from the Native Writers Circle of the Americas and the American Book Award. With Geary Hobson and Kathryn Walkiewicz, she is co-editor of the anthology, The People Who Stayed: Southeastern Indian Writing after Removal (Oklahoma, 2010).

In 2005, McAdams founded Salt Publishing's award-winning Earthworks book series, which focuses on indigenous  poetry, and has since expanded to include contemporary Latin American poetry, translated and edited by Katherine Hedeen and Victor Rodriguez-Nunez. More about the series can be found at Salt Publishing.

Of mixed Scottish, Irish, and Creek ancestry, McAdams grew up in Alabama, has taught in Alabama, Central America, Georgia, Texas, Oklahoma, and the U.K. She now lives in Gambier, Ohio, and teaches at Kenyon College, where she is the Robert P. Hubbard Professor of Poetry.

Posted by Linda Rodriguez at 1:22 PM