2010 was very good to me professionally, but it had some major drama. I began the year with an incredibly creative and productive one-month residency at Ragdale, where I made friends with artists I have kept in touch with throughout the year. I finished my final draft of a novel, Every Secret Thing, and sent it to a waiting editor. I wrote almost the entire first draft of a new poetry book,Dark Sister. And I applied for the NEA Individual Artist Grant (which I didn't get, unfortunately, but I was so pleased to see that my friends Blas Falconer and Michelle Boisseau did). This was all as a result of receiving the Midwest Voices and Visions Award from the Alliance for Artist Communities and the Joyce Foundation. This residency (and its accompanying stipend, which paid for transportation costs for the residency and then paid for my participation in the AWP national conference in Denver) was a huge gift to me, and its effects are still rippling throughout my life in a very positive way. 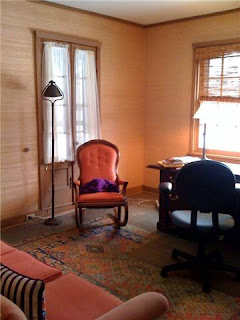 This is my writing studio in my suite at Ragdale.

The next month, I flew back to Chicago (Ragsdale is right outside of Chicago) to read in the Guild Complex's wonderful Palabra Pura Reading Series. We had a great turnout and a very receptive audience at Decima Musa. I love all my Chicago friends!

In April, I went to the AWP with the Latino Writers Collective. I had written a proposal for us to read from our award-winning poetry anthology as a panel at AWP, and it was accepted. I worked the Scapegoat Press booth in the bookfair for a lot of the conference, but I still had a chance to attend many of the panels I wanted to see, and lots of writer and publisher friends, old and new, came by the bookfair or made appointments with me to get together. It was an exhausting but wonderful five days! Latino Writers Collective members at the AWP after our panel presentation.


At the very end of April, we brought in Luis J. Rodriguez for LWC's Cuarta Página Reading Series. Luis is, of course, a fabulous poet and great community activist, and he worked with members of the local Latino community, as well as many LWC members, in conversation and discussion to help both groups in achieving their goals. After this whirlwind one evening and all another day--interspersed with media interviews--Luis was due to give his big public reading and talk at the Plaza Library in the evening. My husband, Ben, and I were on our way to pick him up at his hotel on the Plaza when Ben suddenly began to have problems. In the parking lot of a Plaza restaurant, I was frantically calling 911, then Chato Villalobos, an LWC board member who had taken an active part in all of Luis's visit. Chato left his dinner with friends and sped to the Plaza to pick up Luis to take him to the Library. 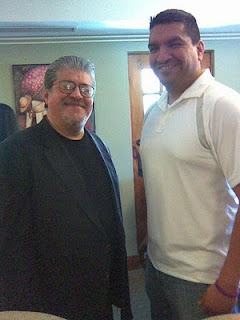 (I have never yet mastered the art of placing photos in Blogger, so please ignore all photo awkwardnesses.)

Meanwhile an ambulance showed up for Ben. After oxygen, the stubborn man was feeling better and insisted on sending the ambulance home--against the EMT's and my wishes. I had already arranged for Chato to take my place introducing Luis, so I started to take Ben home. Two blocks away, it hit him again much worse, and this time there was no doubt in my mind that he was having a heart attack. I pulled over and called 911 in a huge panic since his face was turning blue before my eyes, and he could hardly speak. (I must say, in both cases, the ambulances and firetruck got there in seconds! Can't say enough for those guys and gals!) This time I insisted EMERGENCY ROOM. After a very tough night and morning, they found a big blockage in an artery that would normally necessitate cardiac bypass. Due to Ben's youth (not quite 49) and the good shape of his other arteries, however, they put in a special kind of stent. And now nine months later after 3 months of cardiac rehab and the loss of over 30 pounds (on a man who was already thin), Ben is doing extremely well. Well, yes, there's been a complete change in our diet that hasn't been easy, but he's in very good shape. So the story has a very happy ending.

In July, I began a months-long battle with the city over our yard. Perhaps it stemmed from the time of Ben's heart attack when the lawn wasn't cut nor the garden tended for about a month. Oldest son Niles finally came and weed-whacked the back yard, and our dear foster-son Gustavo came (even though he was working and going to school, both full-time, and preparing for the imminent birth of his first child) and mowed the lawn several times when I realized it was a problem. (Had sort of been preoccupied, you know.) We have always had problems with these neighbors who have a hate for nature calling on our prairie garden over the years, but usually I explain to the city inspector and it's all okay. Only this time that wasn't an option. Had to go to court. That meant missing most of Macondo and spending two entire days in Housing Court--a very enlightening experience. As you might suspect, the rich slumlords get their lawyers in there and get themselves off, but as you might not expect, the judges and the city attorney really work with the poorer people and show them a great deal of respect and consideration. Unfortunately, they're hampered by the super restrictive ordinances. At any rate, I survived and kept my garden.

In the midst of this, Ben and I drove down to San Antonio for Macondo since we had committed to doing a seminar on small press publishing there. I was signed up for the week-long workshop and had to back out because of the initial court date. I just hated that since I love the Macondo writing workshop and the Macondo community so much. However, we wanted to keep our commitment to the seminar so we drove down for Friday when it was scheduled and then left to come back Saturday. It was lovely to at least get a little time with the Macondistas who were present, and it was nice for Ben to have a chance to meet them (though he already knew a good number). The seminar went well, and we had a lovely time at the big final pachanga.

Later in the year, Marjorie Agosin, my dear friend, came to Kansas City (see the post prior to this one). Shortly after that, at the annual Thorpe Menn Award luncheon I received the 2010 Thorpe Menn Award for Literary Excellence. And the lovely extra was that my dear friend Nancy Pickard was the keynote speaker and also won a lifetime achievement award. I had a table of women writer friends there to celebrate with me, and it was a delightful time. 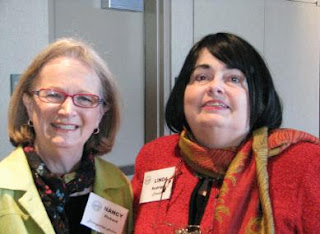 Nancy Pickard and me after the Thorpe Menn Award ceremony 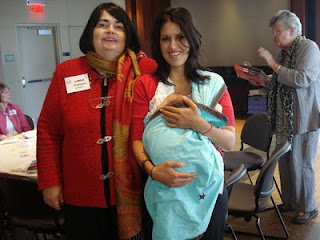 This is my wonderful new foster grandson and his mother, Erika Noguera. Erika brought month-old Bequer (more familiarly known as T-Rex) to the Thorpe Menn luncheon with her mother in a lovely gesture of support. Becquer is a beautiful mix of Gustavo and Erika's features and is beginning his life surrounded by poetry and writers. He is a very lucky boy, and he picked a wonderful set of parents.


Right after the Thorpe Menn event, I flew to Chicago for a panel on unrestricted grant-giving at the Grantmakers in the Arts national conference. I was to speak from the artist's viewpoint. Our panel had three directors of national and regional arts funding organizations besides me, and I found it fascinating to listen to them and the heads of all kinds of small to large such organizations in the packed audience. It's always educational to see an issue from an unexpected perspective. I was quite impressed with all of them and the care and good intentions with which they try to balance artists' needs and funders' demands.

That same evening, I joined my pals at Proyecto Latina to give their regular monthly reading. Diana Pando and Irasema Gonzalez head a fabulous team of young women writers who are doing a much-needed job in the local Chicago arts scene. This group of high-energy, large-visioned young Latina artists offer a monthly reading series, periodic other artistic group projects, at one time a radio show, and now a website that's full of life and spice. We had a great audience and lots of fruitful discussion. Love Chicago!

A little while later, Ben and I made a trip to Milwaukee, where he presented at a big academic conference and I gave a reading at the University of Wisconsin-Milwaukee with the ever-wonderful Paul Martinez Pompa. This was set up by Brenda Cardenas, Milwaukee's poet laureate and author of the stunning Boomerang, and the event was sponsored by the Latino Student Union, an impressive group of students. We had a standing-room-only audience, so of course, Ben and I got lost on our way to the university and got there late. Fortunately, Paul had kept them mesmerized. Attending this event was Bonnee Badger Lugauer, a friend of mine from high school that I hadn't seen since our graduation day over forty years ago. What fun!

I've left a lot of other readings and trips and events out of this account. Actually, I've done more professional traveling this year than ever before--even the year I ran back and forth between the Women's Center in Kansas City and the UN. But I don't want this post to run on forever.

Finally, December rolled around. Ben and I celebrated our 18th anniversary. Very special this year since I came so close to losing him earlier. Then I learned that I would receive the ArtsKC Fund's Inspiration Award and would be able to take a research trip in 2011 that I otherwise could not afford. An absolutely lovely way to end the year!

I hope your 2010 was excellent, but with less drama than mine. And I hope 2011 will be a hugely successful and happy year for you and for me.
Posted by Linda Rodriguez at 12:30 PM