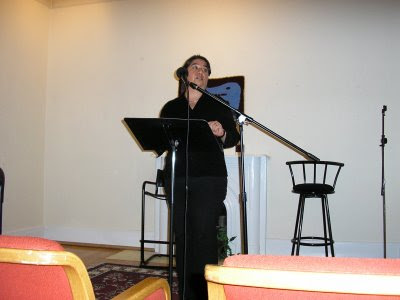 Xanath Caraza reads one of her mystical stories. 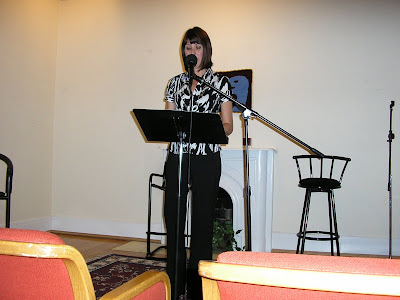 Natalie Castro Olmsted reads a story about growing up Mexican-American in Wichita, KS. 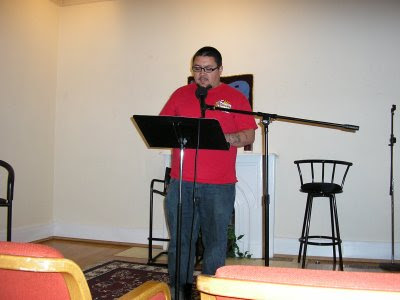 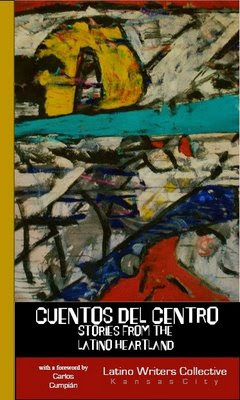 It was a dark and stormy night--well, actually it was. Monsoonlike torrents of rain, heavy thunder and lightning, and tornado watches and warnings. Still, we finished our third annual Latino Writers Collective reading series, Tercera Pagina, on a high note, celebrating with advanced copies of our new fiction anthology, Cuentos del Centro: Stories From the Latino Heartland. Two of our long-distance members who appear in the anthology, Juanita Salazar Lamb from Houston and Natalie Castro Olmsted from Wichita, drove up to Kansas City to read at the event. Some of our audience members came from as far away as southern Colorado. In spite of the dangerous weather, over fifty people turned out to celebrate the end of our most successful series ever and the birth of our second book. And the news, received just before the reading began, that LWC had achieved our official federal 501(c)3 status finally.

So, while the sky turned black, lit by strobelights of lightning, and the wind roared around the old stone castle of The Writers Place, we partied. Dramatic and funny readings, good wine, lots of delicious nibbles, a fascinating mix of people, and the first copies of our gorgeous new books.

This series was our biggest-to-date, and right after it began, we had grant funding pulled due to the economic crisis. We decided we'd make it work anyway. Calamities like this kept striking at each individual event in the series also, yet each event was more successful than the other successful ones we've had in past years. No one has any fingernails left, but we've got big smiles. Almost 1500 people turned out for various events in the series this year. And this was the year we brought the wonderful Sandra Cisneros to Kansas City.

Also to be celebrated is the fact that our first anthology (poetry), launched at the end of last year's series, has been named a finalist for three national book awards, coming in second in one (the 2009 Eric Hoffer Book Award in Poetry), and we're still waiting to hear results from several others. So the new baby on the block has a lot to live up to, but we think it will surpass its older sibling.

So, with our diehard fans who braved the elements for us, we had a terrific fiesta, and all the good times drove the storm away. We all left the building late to find clear night skies outside. One last little grito of joy here.
Posted by Linda Rodriguez at 8:02 PM