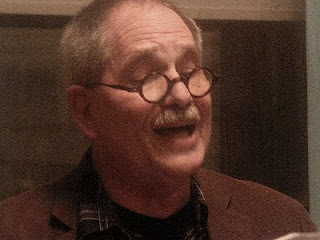 Phil Miller reading one of his poems. Photo by Bonnie Walker.

On Valentine's Day, February 14, 2011, Phil Miller died in rural Pennsylvania where he had retired with his wife, Nancy. Many of you who read this and live outside of Kansas City will have no idea who he was, but all the Kansas Citians will recognize his name. I counted him a friend, as did so many poets and other writers in the area. He gave me my first public poetry reading a long time ago when I only had a few poems published in scattered magazines.


Phil was a fine poet himself with several collections of poetry published and a number of anthologies that he had edited or co-edited. But it's easy to forget that, because he poured so much of his time and energy (which often seemed boundless) into building the public poetry community in Kansas City and later in Pennsylvania. With no funding, Phil co-founded the Riverfront Reading Series in Kansas City in 1987 and ran it for decades. It continues to this day as one Kansas City's major reading series. Later, he and I were part of the founding board of The Writers Place in Kansas City, which is eighteen years old and still going strong. I remember when Ben and I got married at The Writers Place the year it was founded. Phil organized the reception entertainment--Riverfront Reading at the Wedding. Later, Phil became president of TWP's board. He taught at Kansas City, Kansas, Community College and mentored many working class and minority poets through the years.


None of this gives a true sense of the man, however. Phil was a really sweet guy, and he could be funny as hell, wry and sardonic and witty. He was a great ally to have when you were struggling to try to create something for the community. He was a hard worker. He was the kind of person who was loved by scores in Kansas City. He was also a fighter when he had to be. He had been fighting cancer for several years and refusing to let it knock him completely out of the community or out of poetry. He continued writing to the very end. His newest book, The Ghost of Every Day and Other Poems (Spartan Press), is forthcoming.


We will--I will--miss him. I suspect we'll not see his like again soon. I only wish more people could have been blessed by knowing him. I would wish him to rest in peace, except I know wherever Phil is he is raising hell and trying to get some readings started and persuade someone to write poetry and more to read it. Phil was never a man to rest in peace. He was always too alive for that.
Posted by Linda Rodriguez at 7:21 PM No comments:

Books of Interest From Writers of Color-Introduction

This will be a fairly regular feature on this blog from now on. Silly me. I thought I’d do a blog entry on this—a simple list with a brief annotation for each author. After the single-spaced pages of just author + one book grew to four pages and I still wasn’t anywhere near finished, I knew I needed to break it up into a series of blog entries focusing on just a few authors each with perhaps a little more about each author.

The idea for this came from being asked, not for the first time, what books by people of color there were other than the few name-brand authors, such as Toni Morrison, Alice Walker, Sandra Cisneros, Amy Tan, and Sherman Alexie. This question has been coming from sincere people, often teachers.

With such a long list, how can they not know any of these names? Easy. Many of these writers are published by small presses or university presses or were originally published by these presses and have just recently started publishing with the big New York trade houses, which may well not publicize them much at first. I know about them because a lot of them are my friends or they are friends of my friends or I have just been studying the field for a long time. This abundance of wonderful, gifted writers of color is one of America’s best-kept secrets. I may be doing these blog installments for many months, and when I finally exhaust all the fine writers I know about, there will still be many that I am not aware of. But at least, it will be a starting place.

Here’s just a partial excerpt of that long list I made. It’s in no particular order—just the way their names occurred to me--with no books or details. Just to whet your appetite. Each week, I’ll try to go into some detail about several of these authors (and many more, eventually) with titles of books and, if possible, links to where the books can be bought.

...and the list goes on and on. Lots of good reading ahead!
Posted by Linda Rodriguez at 1:07 AM 2 comments:

Since I'm recovering from a bout with pneumonia and injuries from a bad fall a couple of weeks ago (right before the big blizzard hit), I am only posting a poem from my book, Heart's Migration, that relates to new life, new beginnings.

and leaves only the ashes of her old self

behind. She plunges into the dark

future from the glare of her funeral pyre

that brightens the sky of her past

for miles and years and leaves a legend

told to generations of children

of a vast golden one whose gleaming

body rose from the burning corpse,

blotting out the moon

with huge wings beating against

the burning air to lift the dead

ground to the living night sky and fly

through the moon to a new place

with new people where she could be

in transit, her wings already disappearing.

Now she can only crawl

into and out of shallow holes

in the ground of this new life.

Still, the wise avoid trampling her

she drags death behind her.
--Heart's Migration (Tia Chucha Press)

Today has been 75+ degrees, a new record for Kansas City on this date. The birds are out, acting as if they think spring is finally here. It seems very much a time for new beginnings, new growth. I hope you're experiencing the same, as well.
Posted by Linda Rodriguez at 9:27 PM 1 comment: