Why Taking Issue with Racist, Homophobic, Ableist Stereotypes Does Not Equal Being a Member of ISIS and Other Home Truths 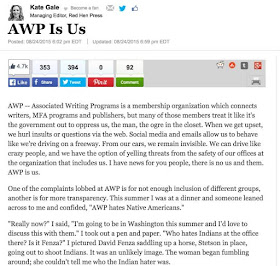 Once again, this will be a long post as I try to unpack the problems with a rambling article in the Huffington Post today that responds to the issues that began on HuffPo in an article by Kate Gale several weeks ago. This current article by Carol Muske-Dukes veers from Kate Gale’s original HuffPo article to terrorism (with accusations comparing those opposed to Gale’s article to ISIS) to an article in The Atlantic to free speech and the First Amendment to standup comedians to AWP to Muske-Dukes’s youthful engagement with teaching in the prison system to Stalin to “triggering” warnings to Dorothy Parker to the University of New Hampshire to “enduring” values and rights to censorship and alleged death threats to Straight Outta Compton to the Kurdish women fighters to Mandelstam and on and on. Oh, and of course, “political correctness,” that tired, old canard from the Newt Gingrich/Jesse Helms-era culture wars against writers and intellectuals that has so steadfastly refused to die.

First, let’s back up and revisit the original article by Kate Gale for those of you who didn’t see it or have blessedly forgotten it. I wrote a blog post about it and included screen shots of her article, which is important because the article has been deleted and replaced with an abortive apology, which was later supplemented with a fuller, still non-apologetic apology.  I have given a detailed timeline with links of what led up to this article, “AWP Is Us,” and what led from it (at least up to the time I posted this blog). I’ve also posted the screenshots of “AWP Is Us” on this blog  for your convenience.

As you may note, in that blog post there is no threat of violence toward Gale. If you go to the link for what was the original article and then became the first “apology,” you can still read the many, many comments.  I haven’t read all of them but have read the first hundred or so. There’s no threat of violence toward Gale. Most of the comments are well-reasoned and articulate commentary on a troublesome piece of writing. If you follow the other links to other blog posts and articles about the controversy, you will find no threats of violence. I’ve read many more blogs and essays about this than are linked in my blog, and all of them have been well-reasoned and articulate without any threat of violence. There may well have been some threat of violence somewhere, but although I’ve read a huge number of internet article comments, blog posts, articles, essays, Facebook posts, and tweets concerning the Gale article, I have seen not one threat of physical violence, not even in the heated discussions of it that have taken place in private Facebook groups for writers of color. I urge my readers to google “AWP Is Us” and “Kate Gale AWP” and read all the various commentary for themselves. Violent threats are obviously not the common tenor of the opposition to Gale’s column, although Muske-Dukes would try to make it seem so. 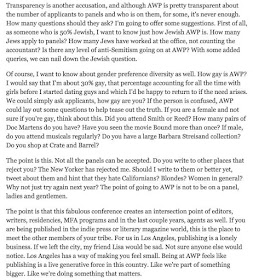 Unfortunately, Muske-Dukes seems to have particularly conflated Gale’s article, stand-up comedians, and the First Amendment in a most bizarre way. First of all, freedom of speech, as guaranteed by the First Amendment, is the constitutional right of a publisher to publish even controversial work without official interference from the government. It does not guarantee that readers will not take issue with the published work. It does not even guarantee the right of an author to be published if a press does not choose to publish her/him. It is narrowly focused around banning official government-supported censorship of publishers and has been expanded to cover the government’s inability to officially stop most kinds of oral speech, even if offensive. No government official made any attempt to prevent the Huffington Post from publishing Gale’s article. Gale is not a stand-up comedian in front of a live audience, so the many odd references to various stand-up comedians and the suggestion that comedy is dead because of the opposition to Gale’s piece make no sense, at all. As a matter of fact, Gale herself, in her later apology, has called her article a failed attempt at humor.

Perhaps one of the most irksome parts of Muske-Dukes’s article is her assumption that Gale’s critics are not activists and are not doing anything for the community.

“But I'm inclined to ask the ‘virtual vigilantes’ if they have ever started a press or a membership organization, if they've gone into the prisons to teach -- or if they've tried to do stand-up? Instead of weeping, why not figure out how to be strong?”

I know many of the people who have articulately opposed Gale’s stereotypes with comments, blog posts, essays, etc. We have started and run presses and membership organizations and reading series. We have gone into prisons and jails and juvenile detention centers to teach—and inner-city schools and domestic-violence shelters and homeless shelters and among migrant workers and on reservations and elsewhere. I have myself done all of those. Most of us still are doing such things. The assumption that only white privileged academics do anything for the community is both false and foolish.

Another assumption she also makes is that no one who opposed Gale’s article opposed the erasing of women and the misogyny of the movie, Outta Compton. Once again, Muske-Dukes is drastically incorrect, apparently not having bothered to research her accusation before making it. The Washington Post had an article by Jamilah Lemieux discussing the fact that all the critical praise for the movie was coming from white male critics.
https://www.washingtonpost.com/posteverything/wp/2015/08/21/white-critics-and-rap-fans-love-straight-outta-compton-but-theyre-missing-half-the-story/

And there’s much more that can be easily googled.

Now, we come to the really foolish hyperbole. Some of it lies in the above quote from the article—“virtual vigilantes.” But it gets much worse.

“What, I asked myself, had Kate Gale done to piss off Isis?

Here's how she pissed off (if not Isis itself) those unwittingly willing to take ideological instruction (in the cause of self-righteousness) from the M.O. of extremism. “

“I'm talking about women who actually fight and kill members of Isis! Though they live in the autonomous region of Iraqi Kurdistan -- an area beset by tragedy and oppression -- these women use Isis' misogyny against them. They are the Kurdish women fighters who fashion a military strategy on the belief of these Muslim extremists that if they are killed by a woman they cannot go to heaven (so forget the 72 virgins!) -- so if they see a female fighter coming at them, they run like hell. This is a desperate situation but it is also funny -- unless perhaps you're too P.C. to laugh. Instead of weeping, why not recruit yourself to go over there and join forces with women who really know the meaning of the comedy term, ‘to kill’?”

So, if we have issues with Gale’s use of racist stereotypes for “humor,” we are terrorists, members of ISIS, “willing to take ideological instruction… from the M.O. of extremism”? I would like to note that, to my knowledge, no one tried to even imply that Kate Gale was a terrorist, a member of ISIS, or taking ideological instruction from terrorists. But that is the accusation Muske-Dukes levies against anyone who has problems with Gale using the genocide of our ancestors as a joke to hold us up for ridicule. As Kimberly Gail Wieser comments on Muske-Dukes’s article, “. . . and there's just a little historical irony in making jokes about the American Holocaust and then calling us terrorists if we defend ourselves when other people were the ones utilizing violent language. Just saying.”

Also, to suggest that we must somehow prove our genuineness, non-terrorist-ness, and non-PC-ness by volunteering to go over to the Middle East and join up with the Kurd women warriors who are fighting against Turkey and ISIS is so bogus that it’s truly laughable. It’s as if Muske-Dukes believes that only those with white privilege are allowed to criticize anything in this society without making some extraordinary effort to “deserve” that right. How dare we people of color, LGBTQ people, people with disabilities even open our mouths, right? Well, we dare. And we shall go right on speaking out when we see people employing racist, homophobic, ableist stereotypes.

The sad thing is that many people within AWP’s diversity communities were so disgusted with the whole situation before that they wanted to withdraw from AWP. There have been calls that we should break away and form our own organization or go to another organization that’s more welcoming of diversity. Along with many others, I’ve been trying to persuade people not to run away but to stay and work with AWP to make things better. We’ve pulled together all the diversity caucuses to try to work things out and keep people from bolting in large numbers. A piece like Muske-Dukes’s undoes a lot of that work and causes us to start all over again.

How often must we go through this? If this keeps up, soon enough, even those of us who keep saying, “Not all of the white lit hierarchy thinks that way—we need to stay and work things out,” will have to agree that “yes, they just want us to shut up and take whatever they dish out.”